On Wednesday, Lucie Safarova officially retired from tennis. As many of you will know, Lucie has been my favourite player since I started supporting her back in 2014. I’ve always such admiration for her fighting spirit on court, and the respect and kindness that she has shown to her opponents and fans. She is genuinely one of the nicest players on tour. As a leftie myself, i’ve always been in love with that forehand! This post brings together some of my favourite fan memories of supporting Lucie.

I’d always been fond of Lucie and started to follow her career more closely in 2014. I loved her partnership and interactions with then new coach, Rob Steckley. During a tough match against Maria Sharapova in Miami and after she had valiantly battled back to force a third set, Rob came on court and delivered an inspiring and hilarious pep talk (see below). The words that i’ve used so many times on this blog – bye bye old Lucie, hello new Lucie!

I watched Lucie play live twice during her breakthrough Slam run in 2014 where she reached the semi-finals of Wimbledon. Lucie beat Julia Goerges in a tough first rounder, 7-6(3) 7-6(3), and then advanced past the last 16 for the first time in her career by beating fellow compatriot, Tereza Smitkova, 6-0 6-2. The second match was a particularly memorable one as it was on my birthday! I remember watching from the Court 18 roof, absolutely beaming. Lucie produced such a devastating display in one of the biggest matches of her career.

Lucie’s 2015 Australian Open had ended in singles at the first round. The tournament concluded on a high though as she teamed up with Bethanie Mattek-Sands to win the whole caboodle. It was a surprising run because it was their first ever tournament playing together! It was the beginning of a wonderful partnership and friendship that saw Lucie and Beth win five Slams together. 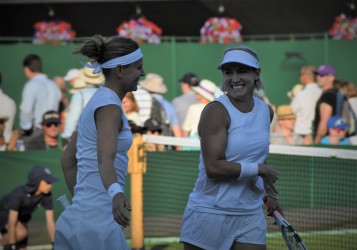 When it all clicks together, Lucie is a truly world class player. In Doha, she produced a series of superb, winner-packed displays to win the biggest title of her career. Lucie dropped just 15 games through her last three matches and beat Victoria Azarenka in the final, 6-4 6-3. I love the screencap on match point linked below (from Tennis TV – a blast from the past) because you can see a little smile emerging!

In all my years of following tennis, the 2015 French Open will be tough to top as my favourite tournament. It was Lucie’s most prolific tournament as she won the doubles with Beth and reached the final in singles. It also coincided with my first tennis trip abroad. I saw the journey begin with Lucie’s first round singles match against Anastasia Pavlyuchenkova. It was such a dramatic encounter, my favourite from the short jaunt to Paris, on the picturesque and sun-swept court 2. Lucie missed multiple set points in the second set but finally got the job done in what was a high-quality clash, 7-6(6) 7-6(9) against one of her best friends on tour. I got a shot of their post-match embrace, which both players shared on social media 😍.

The monumental win of Lucie’s run was her defeat of the number two seed and defending champion, Maria Sharapova, 7-6(3) 6-4. After barely come up short in their last three encounters, the win over Sharapova was a very satisfying one. For Lucie’s quarter-final against Garbiñe Muguruza, I remember I was in an all-day workshop at work. My brother works at the same company and when I came back to my desk, he glanced over with a big smile. I knew Lucie had won! He had written a detailed account of the match which was adorable 😂 . I listened to the semi-final against Ana Ivanovic unfold on French Open radio. I was a wreck for the last 30 minutes as Lucie closed out a historic victory, 7-5 7-5.

I was thrilled to be able to watch the final live against Serena Williams. It looked like it would be a one-sided finale until Lucie mounted a sensational comeback to win the second set. I was so proud of her efforts and it epitomised why I am a fan because she is such a fighter on court. For a split moment, up 2-0 in the third set, I thought she was going to do it. Serena eventually powered home for the three set win, 6-3 6-7(2) 6-2. It was such an incredible moment to witness my fave reach the final of a Slam and nothing will ever top it in my tennis fandom. I absolutely screamed the house down 🤣.

Lucie was sidelined with a bacterial infection towards the end of the 2015 season which was sadly the first of many illnesses that disrupted her career. Lucie returned in Doha in early 2016 and would lose seven straight matches. Fortunes flipped in Prague, of all places, as Lucie not only scored her first win of the year, but her first five as she outlasted Sam Stosur in the final to take home the title, her seventh and final WTA singles title on tour.

The most dramatic Lucie match i’ve ever watched live was her first round win at Wimbledon over BFF, Bethanie Mattek-Sands. Lucie saved three match points to win, 6-7(7) 7-6(3) 7-5 in two hours and 46 minutes. The handshake shot at the end is one of my favourite tennis shots. You can see the disappointment in Beth’s eyes, but I loved the respect on show between the pair. Lucie shared the picture on social media. It is always a special moment when a player shares your work.

I then got to watch Lucie win again on my birthday with her second round win over Samantha Crawford, a drama-free win, 6-3 6-4.

Lucie teamed up with Barbora Strycova to win the bronze medal at the 2016 Rio Olympics. The pair knocked out Serena and Venus in the opening round and beat fellow compatriots, Andrea Hlavackova and Lucie Hradecka in the bronze medal match. Their joy at the end of the match was infectious. It was a sweet moment and the medal ceremony was a tearjerker!

So happy for Lucie and Bara! 😀😀😀 pic.twitter.com/8BlzlT3uCs

I absolutely loved my week in New York back in 2016 – on a random sidenote, I think it was my favourite Slam to attend! On the second day, I watched Lucie play Daria Gavrilova on the old Grandstand. The match got dicey at the end but Lucie managed to serve it out for an excellent straight sets win, 6-4 6-4. 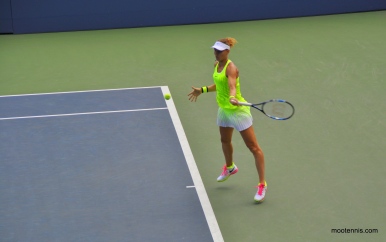 I completed my career slam in Melbourne in 2018 and watched Lucie win her first and second round matches in singles. I also got to see the first part of her marathon match against Angelique Kerber in Sydney, sadly not with the W. I didn’t realise at the time but it was my last ever live experience of watching Lucie 😭. I’m glad I got to see her go out with two wins, the latter in brutal conditions against Sorana Cirstea.

After Beth pulled out of Roland Garros, Lucie teamed up with Dominika Cibulkova for her final match against the pair of Andrea Petkovic and Sofia Kenin. Petkovic and Kenin won, 6-4 6-0. It was so nice that Petko was on the other side of the net because she’s one of the biggest huggers on tour!

Morgane on Twitter is collecting fan messages for Lucie. If you’d like to participate then please fill out the form at the link below!

I'm trying to collect fans' messages/wishes for Lucie Safarova's retirement. If you want to participate, please fill in the form, in EN or CS. Thank you in advance! https://t.co/nXSQ6HgDPd

Congrats on an amazing career and thanks for all the memories, Lucie! It’s been an absolute ball 😘😭🙂