I’ve just got back from another amazing day at Wimbledon. It was a special day as it was my birthday and I got to see two of my favourite players, Lucie Safarova and Timea Bacsinszky both win their matches in straight sets. Read on for my recaps and photos. Note another Set Points round-up will be posted on Friday morning including coverage of the dramatic Radwanska-Konjuh match. Previews will be back for Saturday’s matches and i’ll be going to be Wimbledon for the last time on Saturday where i’ll be on No.1 Court. I’ve been so lucky this year…

With first round matches still to be played, there was so many matches to choose from on the schedule! Play also began at 11am so more live tennis! My aim was to see Timea Bacsinszky on court 3 although whenever i’ve been to Wimbledon in the past, I always walk past massive queues for the unreserved sections on this court. My brother and I (big thanks to big bro for taking me… he had to though, it was my birthday haha) arrived as the gates opened and were right next to court 3. We joined the queue and then headed almost straight into the court where we had our pick of seats!

No problems getting a seat on court 3, starting with Timea! pic.twitter.com/oAvm65SWkM

Bacsinszky’s first round match against Luksika Kumkhum finally got underway. Timea made a slow start; it wasn’t a great surprise as she had played just one grass court match in Eastbourne where she lost out in straight sets to Kristina Mladenovic (shocked by Kiki’s loss today!). The first four games of the match all went to deuce and Kumkhum eventually got the early break to lead 4-2*. Bacsinszky had a coughing fit and had to pause play to go and get a drink. Someone tweeted me that she had swallowed a bug!

@Moo_Tennis Comms said that she apparently swallowed a bug?! 😝

Bacsinszky seemed to focus afterwards and began to find her rhythm, winning four games on the trot to bag the opening set, 6-4. Kumkhum went off her game and it kind of made sense with her current ranking of 169. She played some lovely points early on, but began to miss more and more as the set went on. 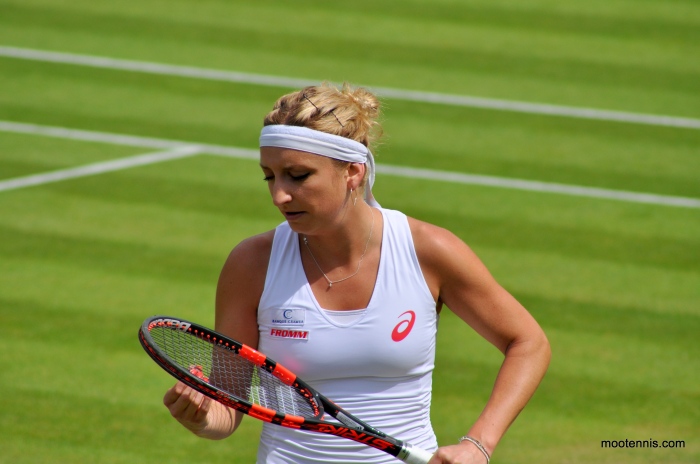 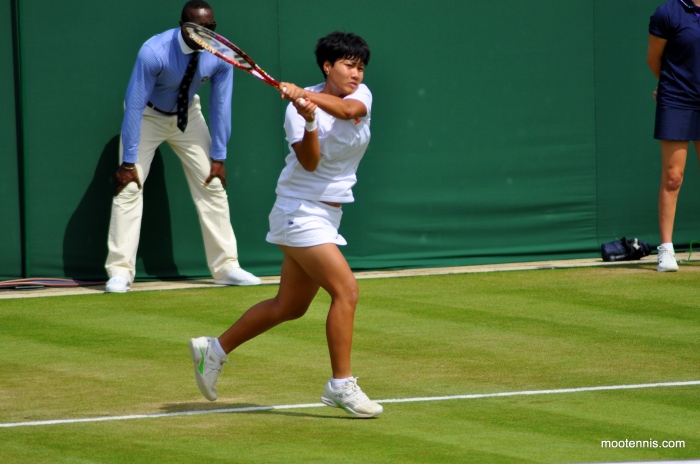 Into the second set and Bacsinszky went up an early break to lead *2-1. The pivotal game of the match would come in the following game where the Swiss player finally managed to consolidate her serve in a mammoth six-deuce game where she was forced to save four break points. Kumkhum missed so many shots up at the net and while the intent was there, she just couldn’t close the points. Bacsinszky won the last three games of the match, playing her best tennis and beginning to dictate more rallies and be more aggressive behind her groundstrokes. I sound like a broken record but that backhand is gorgeous… I wish Timea could give me a tennis lesson on how to hit backhands. 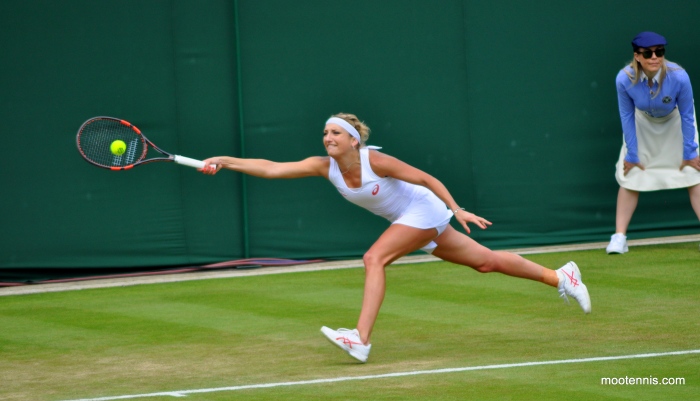 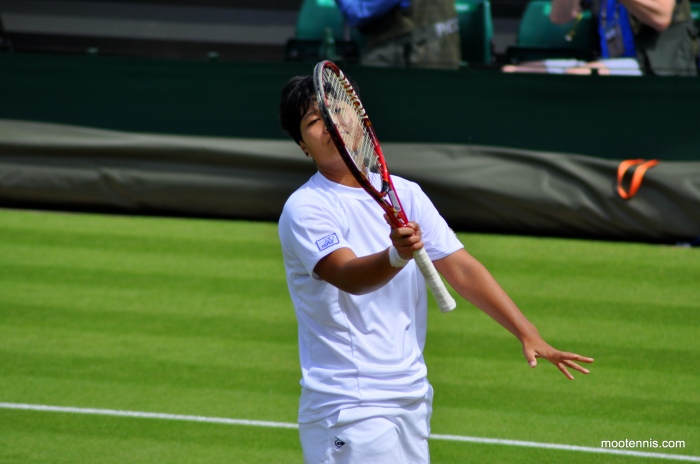 It wasn’t a perfect performance from Bacsinszky but a win is a win. I think she just needs more time on the grass and it’s whether she can improve in time as the calibre of opponents improves. Next up in the second round is Monica Niculescu which is a TOUGH match-up for Timea. Niculescu leads the head-to-head, 4-2 but Bacsinszky showed terrific resolve to defeat the Romanian player in the fourth round of Wimbledon last year, 1-6 7-5 6-2. 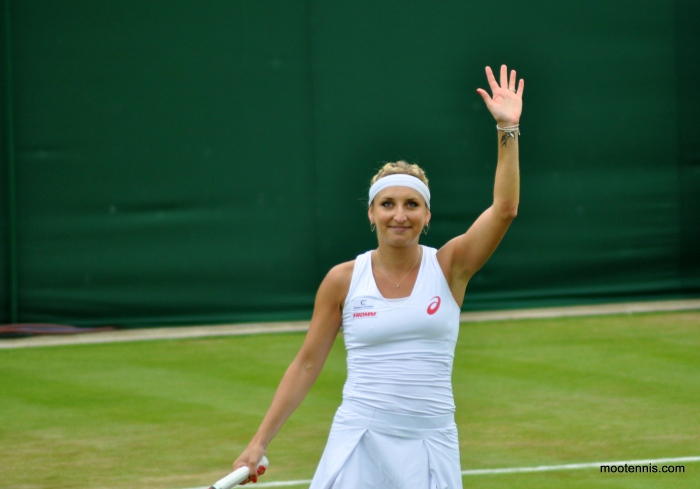 There was a nice handshake between Timea and Luksika. I was thrilled to witness my first Timea win live and she also retweeted one of my photos 🙂 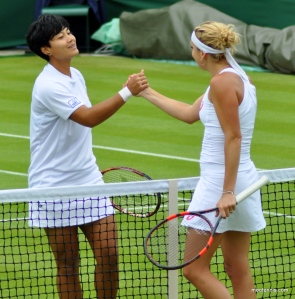 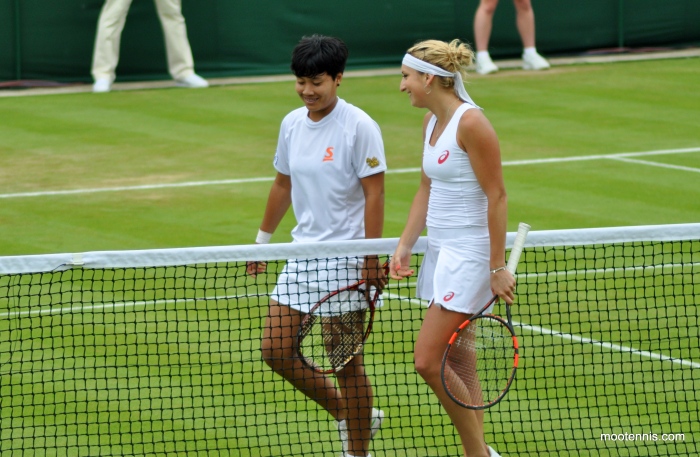 So Timea was through and I just HAD to watch Lucie again. In case you missed it, I wrote about Lucie’s first round win over Bethanie Mattek-Sands which nearly destroyed me HERE. Lucie saved three match points to book a second round match against Samantha Crawford. I was a little bit nervous for Lucie because Sam has a huge game, much like Madison. When it’s on, it is ON.

I didn’t need to be worried because Lucie played a superb match. You just need to look at her stats…

Lucie served great and didn’t face ONE break point. The aspect of her game that I was most impressed with was the return. Against Anna-Lena Friedsam in Eastbourne, she just couldn’t get the return back in court. Today though she got so many returns back and often with good depth. She seemed to have a good read on the Crawford serve. Furthermore, she did so well to absorb the pace from the American. I was really surprised how consistent Lucie was and she made very few errors. The forehand down-the-line was on the money. It was just all good… 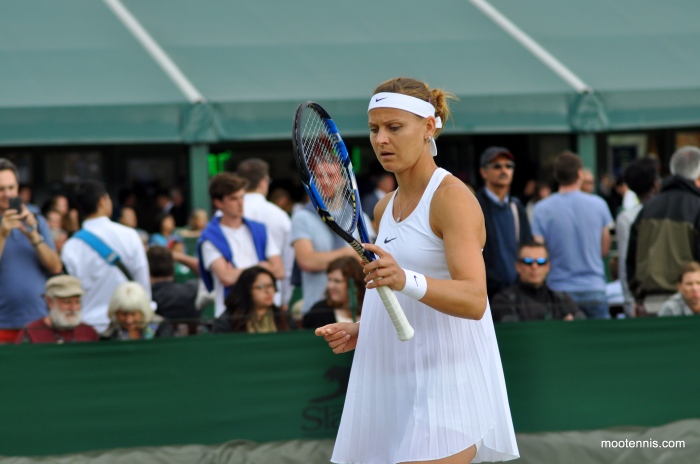 Crawford has two consecutive service games in the second set at *2-4 and *3-5 go to deuce but she held. Crawford made a a slow start in the first set on serve with a string of double faults but she tidied up her game in the second set. She had a lot of encouragement from her team who kept shouting things like “that’s the way, Sam” and “keep plugging away”. When Crawford held for *4-5, I was worried…

Lucie went down *15-30 on her serve as she tried to serve out the match. At this moment, a guy walked past and said “Oh it’s Safarova, she’s a choker”. He said “this will go 15-40, game and then set”. Well i’m delighted to say that Lucie closed out the match by winning the last three points. He then said at the end that her opponent had given it to her before strolling off, hopefully embarrassed. I was raging haha but it’s always nice to see someone proved wrong like that 🙂

It was a dreamy match from Lucie and I honestly can’t remember watching such a clean display, definitely in 2016. She was beaming at the end and I waited for her to walk past and congratulated her. She smiled 🙂 I hope she heard me cheering her on during the match!

Lucie plays Jana Cepelova in the next round after the Slovak player knocked out the number two seed and French Open champion, Garbiñe Muguruza over on No.1 Court. Lucie’s draw has opened up and I think her confidence is sky high after the win over Beth. She looked like a completely different player today compared to the one I saw in Eastbourne. I know that I could be perceived to be biased but I think she has real chances to go far in this draw if she maintain today’s performance level. I’m excited to see her next match, this time on the TV. 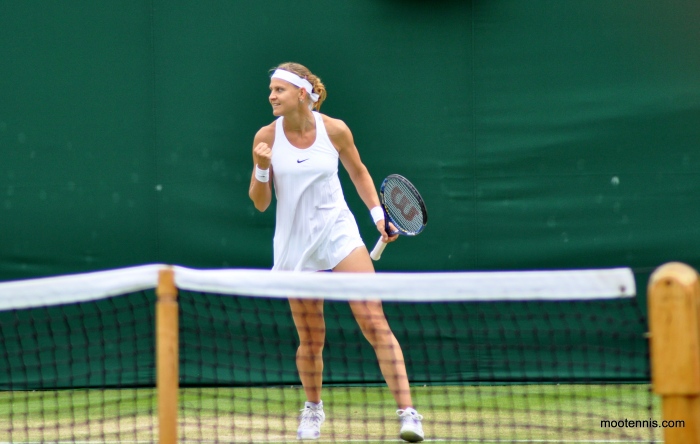 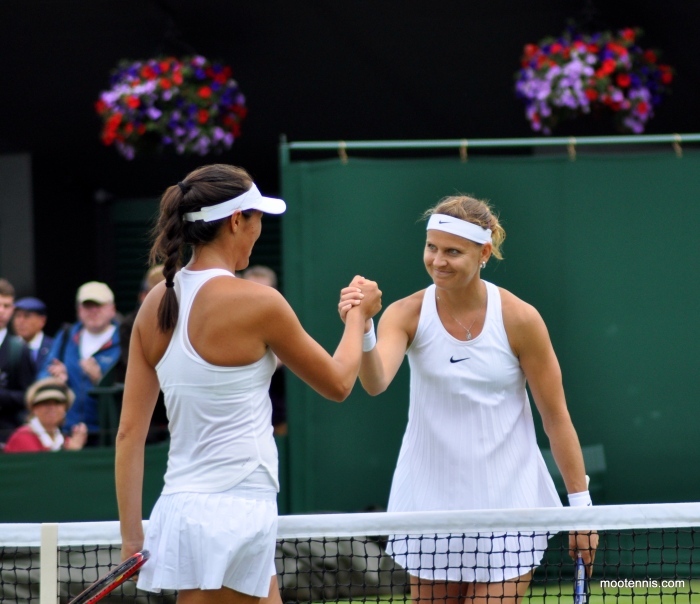 It’s a special experience to watch your favourite players live and I wish all fans get this experience one day. I was really lucky to see both Lucie and Timea win today and it will be yet another memorable live tennis experience that I will never forget.