This is the fourth report from my week at the Australian Open. For a recap and photos from day 3 where we watched matches including Svitolina-Sinakova, Kumkhum-Bencic, Wozniacki-Fett, Linette-Kasatkina, Nadal-Mayer, Kontaveit-Barthel, Dimitrov-MacDonald and Mertens-Gavrilova, click HERE. For our last day at the Australian Open we had day session tickets for the Rod Laver Arena. Let’s get stuck into day 4!

After three long days at the tennis we were DEFINITELY flagging ahead of our final day! It was also set to be an absolute scorcher with temperatures set to rise to 40C. It just so happened that Thursday was when had our best seats on Rod Laver Arena and therefore plum in the sun 😰. We arrived just in time for the start of play at 11am and headed straight into Rod Laver Arena for the first match of the day between Maria Sharapova and Anastasija Sevastova.

Our seats were fantastic and we had a great view of the the players coming out onto court. We had the first 20 minutes in shade but this was soon replaced by wall-to-wall sunshine. We were as prepared for the sun as we could be – the suncream was lathered on, we had a towel on our legs and my brother had a solar fan going! 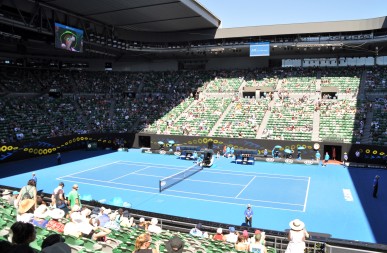 The first set whizzed by in just 24 minutes as Sharapova won it, 6-1. It was a near-perfect set from the Russian player who was superb on serve and return, and both aggressive and accurate off the ground. Sharapova went up an early break in the second set but couldn’t hold onto it as she suddenly began to look suspect on serve and throw in some unforced errors. Sevastova definitely improved and began to grow in confidence in the rallies. 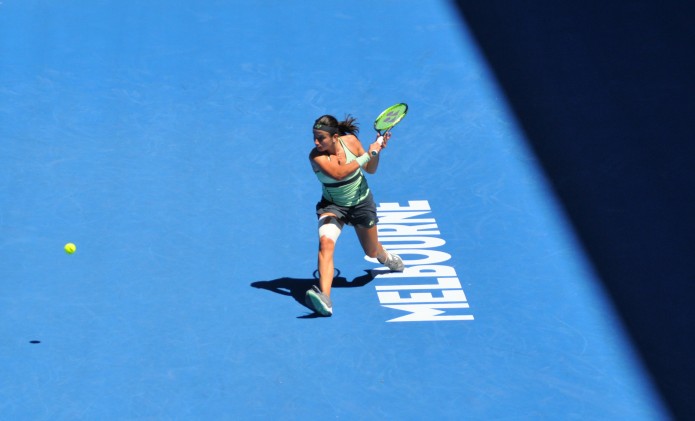 Sharapova was unable to serve out the match at *5-4, but managed to force the tiebreak. Despite some surprisingly woeful drop shots, Sevastova was now playing her best tennis of the match. Sharapova played a sensational second set tiebreak with three consecutive winners in the middle of it. Sharapova prevailed, 6-1 7-6(4) and was understandably ecstatic at the end. 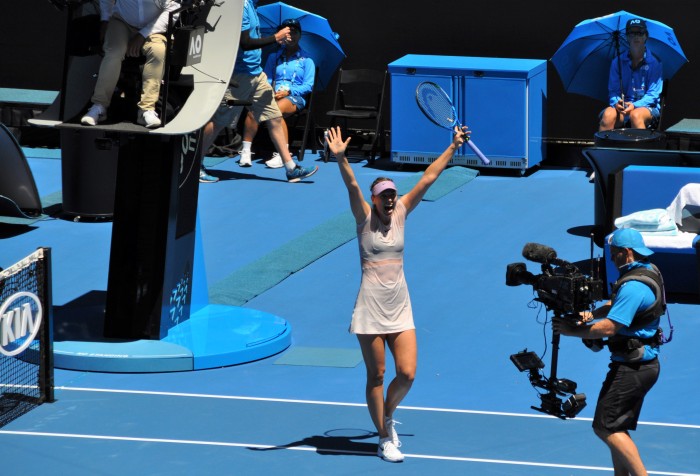 Sharapova spoke about her rivalry with Sevastova in her post-match interview and it was clear that she wasn’t going to underestimate her opponent. We were quite pleased to have survived a whole match and headed for some shade!

Next up on Rod Laver Arena was Garbiñe Muguruza against Hsieh Su-Wei and we were back on court midway through the first set. The sun was getting up and there were very few people in the seats around us. This meant we had a very clear view. I absolutely loved taking photos from our seats. I had to stop though because not only I was overheating, but so was my camera! 😂 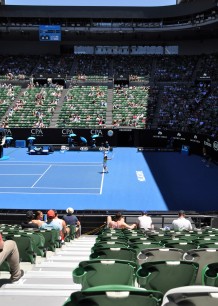 Muguruza-Hsieh was a quality match. Hsieh was hitting so early and into the corners, frustrating Muguruza. We did laugh at Hsieh’s rather nonchalant putaways at the net and it cost her on one point. Muguruza almost took out a lines judge which nearly cost her the match.

Muguruza took a medical time-out down 2-5. While she managed to level up at 5-5, the Spaniard was rather routed in the ensuing first set tiebreak. For the most part, I was marvelling at the depth that both players were getting on their groundstrokes. Muguruza lost her way at the end of the first set as Hsieh took it on the tiebreak. 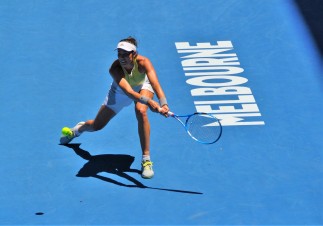 I had to get out of the direct sunlight and Lucie was starting her match on the outside courts so I headed out to Show Court 3. I managed to get a seat with some shade but it was still damn hot. I can’t imagine this right now as I sit here shivering 😂. It was a very depleted crowd for Lucie Safarova against Sorana Cirstea with a only a handful of brave people out in the sun.

I was so happy to see another straight sets win for Lucie! I thought both players handled the conditions admirably. Safarova played a great match – she served much better than in her first round and was mentally sound. She was aggressive, yet also more consistent than Cirstea who made quite a few wild unforced errors.

Cirstea had a group of guys cheering for her (I think the same ones that were rooting for Cibulkova on day 1) and they managed to add Sorana’s name into the Havana song. They also kept shouting in/out on the Hawkeye depending on which way it would favour Cirstea and moved around the stadium to do their rather imaginative songs and chants. Safarova had her own group of fans adjacent to the net who got up and clapped from time-to-time. On one occasion, they got a “who are ya” chant back from the Cirstea fans 😂.

Safarova served for the match at 6-2 *5-4. She started with two forehand errors, one on a short ball ballooned long. I only shout support for Lucie when I feel she needs it and now was definitely the time! She kept it together and chalked up some match points. Cirstea saved a pair in style, one with a huge return winner. Lucie managed to serve it out though for a really fab win and headed over to her team for the match win selfie.

The grounds were so much quieter on Thursday compared to Tuesday. I guess people didn’t bother coming out because of the weather. It was a quite a windy day and i’d compare it to being in a big hairdryer! While I was out of Rod Laver Arena, Hsieh had completed the upset of Muguruza, 7-6(1) 6-4 and the following men’s match between Novak Djokovic and Gael Monfils was on court. I joined my overheated brother for one game as Monfils served out the first set. One game was enough. We just couldn’t handle the heat.

We took a break to cool down (via the water mist fans) and then slowly meandered our way around the outside courts for one last time. We walked past Jiri Vesely playing Adrian Mannarino in front of a very sparse crowd on our way to Court 14 where Dasha squared, aka Daria Kasatkina and Daria Gavrilova, were just about to start their doubles match against Vania King and Jennifer Brady. This felt like a nice way to go out at the AO! 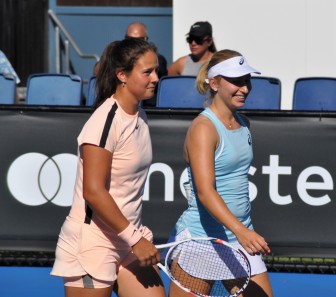 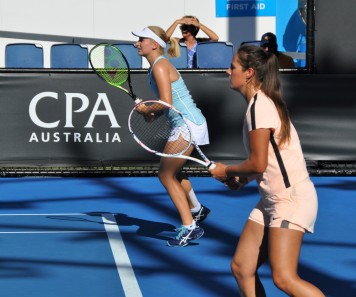 Dasha squared just crack me up! 😂😂😂

I really liked Vania’s colourful outfit! Her doubles prowess was clear to see and she owned the net. We only stayed for half a set and it was an up-and-down opener with plenty of breaks of serve. Brady and King eventually won in straights, 6-4 6-1.

We trotted back to Rod Laver Arena to try and catch the end of Djokovic-Monfils. We didn’t make it in time but did see Djokovic’s post-match interview. It was about 6pm and we were cooked so sadly called it a day. What a fab four days at the AO! I’ve got one final post to write with a review of the AO fan experience. Hopefully this will be helpful for anyone that may be planning a trip to Melbourne in the future.