Simona Halep battled to a three set victory over Timea Babos in the first match on Ashe. The stats weren’t pretty but Halep’s post-match interview may have explained her increasingly passive performance.

Simona Halep after escaping with the win: "I don't know how I came back." Says her back has been "blocked" the last two days. #USOpen

It was a brave effort from Babos who was competing in her first ever Slam third round match. She has made big strides this year in singles…

Halep plays Carla Suárez Navarro in the fourth round, who had a birthday victory over Elena Vesnina, 6-4 6-3. The crowd sang her Happy Birthday at the end :-).

Ana Konjuh is into her first Slam fourth rounder after beating Varvara Lepchenko in three sets, 6-3 3-6 6-2. She’ll get another shot at Agnieszka Radwanska in the fourth round having missed match points in their second round match at Wimbledon. Her challenge was effectively ended after she tripped on a ball and hurt her ankle :-(. 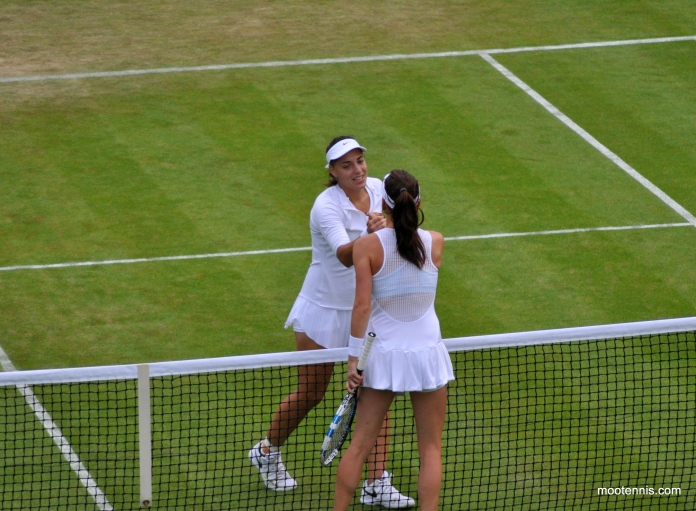 Radwanska had a comfortable third round win over Caroline Garcia, 6-2 6-3. Garcia had come-from-behind wins in the first two rounds but never challenged in this match in what was a disappointing display. Aga was on it with the passing shots and advances to the fourth round where she’ll be bidding to reach her first ever US Open quarter-final.

Serena Williams continued her serene progress through the draw with a 6-2 6-1 victory over Johanna Larsson. In the fourth round she will play Yaroslava Shvedova who has made her second consecutive Slam fourth round. Shvedova has dropped even fewer games than Serena through three rounds of this year’s US Open.

On the go: @serenawilliams moves on in New York pic.twitter.com/qHf8WRGiWL

Twirling into the next round. #Serena #USOpen pic.twitter.com/k5UFAvokAy

The final fourth rounder from the top half is probably the most intriguing as Venus Williams will play Karolina Pliskova. Finnnnnallly, Pliskova has broken new ground and reached the second week of a Slam. She enjoyed a fourth consecutive straight sets victory over Anastasia Pavlyuchenkova, 6-2 6-4. Venus dropped just three games in the night session, beating Laura Siegemund, 6-1 6-2.

A few things missed from the first week that had me in hysterics… Poots is legendary.

EVERYBODY WAS KUNG POOTS FIGHTING pic.twitter.com/jMgiRY8X79

And Gavrilova’s response was magnificent haha!

And finally, i’m beginning to go through all my photos from the US Open – I barely scratched the surface with the ones I posted here on the blog and Twitter. Check out my Facebook page at the links below for full photo albums.

Will post some photo albums from the US Open on my FB page.

Here's pre-tournament from the first Sunday…https://t.co/WRiOKs9Yu0