This post covers two fourth round matches that will be played over the next two days including Angelique Kerber v Petra Kvitova (Sunday night) and Simona Halep v Carla Suárez Navarro (Monday). The first of the review posts from my trip to the US Open should be out soon! For photo albums from the US Open, check out my Facebook page HERE. For an in-depth preview of another fourth round match, Madison Keys v Caroline Wozniacki, click HERE. 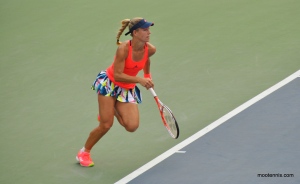 Well hello there… the number two seed, Angelique Kerber faces her toughest test yet up against the number 14 seed, Petra Kvitova.

Kerber is yet to drop a set this week although she was forced to save three set points in her second round win over Mirjana Lucic-Baroni. In the third round, Kerber flew past CiCi Bellis, 6-1 6-1. There’s been no sign of P3tra yet also as she has safely navigated her way into the third round. Arguably Kvitova’s best win of the week so far came in the first round against Jelena Ostapenko, up against a player she had a 0-2 record to in 2016. Kvitova recovered from a break down in the first set to win that match, 7-5 6-3.

.@AngeliqueKerber is moving on at the @usopen, she’s through to R4 pic.twitter.com/2mJyu9e8ho

Head-to-head record: Kerber and Kvitova are tied at 4-4 in their head-to-head; six of their eight matches have gone the distance. Kerber has won the last two, prevailing in a three setter in Stuttgart earlier this year where Kvitova looked strong for a time before Kerber powered home for the win, 6-4 4-6 6-2.

Interesting stat: Kvitova is enjoying her best spell of the year so far; Kvitova has now won at least two matches at her last four tournaments. The bronze medal picked up in Rio seems to have had a positive impact on her going forward.

Final thoughts: I’m a big fan of Kerber-Kvitova matches and I have high hopes for this one! Kvitova is capable of producing sensational tennis and there have been some nuggets of goodness in the past few months to suggest she’s playing well enough to challenge Kerber. However, the German player has been in excellent form herself and has been exhibiting a more positive gameplan for much of the year. 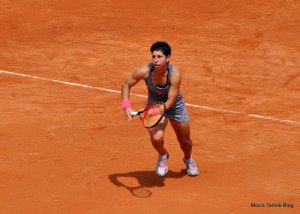 In another stalwart of a WTA match-up, Simona Halep and Carla Suárez Navarro will meet for the 11th time on the WTA tour, but the first time in 2016.

Halep needed three sets to overcome a brave effort from Timea Babos, 6-1 2-6 6-4. Halep played a superb first set, but became increasingly passive as the match wore on. She talked about a “blocked” back in her post-match interview, which she said affected her movement. I wonder if this wasn’t helped by the conditions which were much cooler at Flushing on Saturday. Babos won the last 11 points of the second set and was up a break in the third set at 3-1. The Hungarian player was pegged back to 3-3 and then had two break points on Halep’s serve at 4-4; however she committed too many errors at crucial stages. As close as this got, it never felt like Babos had the mental strength to pull out the win.

Suárez Navarro has enjoyed an excellent start to the US Open and is yet to drop a set en route to the second week. The Spaniard had her most challenging match of the week so far in the third round against Elena Vesnina but still advanced in straight sets, 6-4 6-3. Suárez Navarro won 68% of points behind her first serve, 60% of points behind her second serve and had +1 winners to unforced errors differential (16 to 15).

So Halep does this and wins the final four points to advance to week two. Good news for racquet tossers. pic.twitter.com/38Wk4gDFUG

Simona Halep after escaping with the win: "I don't know how I came back." Says her back has been "blocked" the last two days. #USOpen

Head-to-head record: Halep and Suárez Navarro are tied at 5-5 in their head-to-head. Their last three matches have all gone the distance with Suárez Navarro edging their last match in Rome last year, 2-6 6-3 7-5. Halep has won four of their five clashes on hard courts.

Interesting stat: Halep has won nine out of her last ten three set matches on tour.

Final thoughts: This should be another close encounter considering the pair’s recent form. Halep’s back may be a concern if the conditions are cool. She battled supremely well against Babos, but Suárez Navarro is likely to have more staying power. Suárez Navarro is playing well enough to sweep through if Halep is still struggling but with at least a day to recover, i’d guess Halep should be good to go for this fourth rounder..