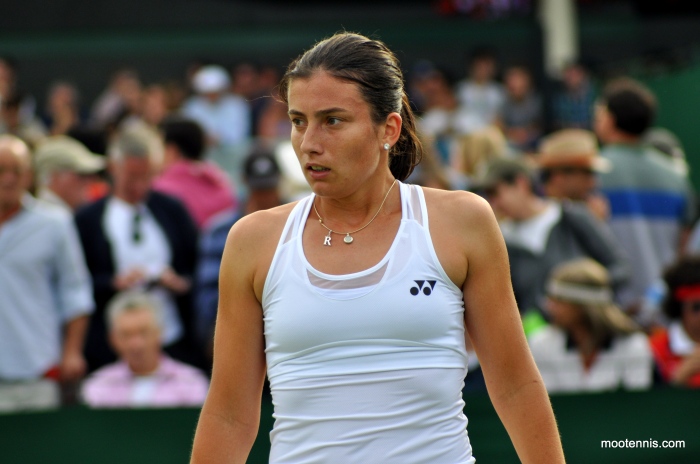 In an all-unseeded last eight meeting, Caroline Wozniacki and Anastasija Sevastova will play each other on Tuesday for a place in the US Open semi-finals.

Wozniacki continued her resurgence this week with a second top ten win of the tournament over Madison Keys, 6-3 6-4. It was a superb performance from Wozniacki who not only moved and defended well but was also positive in her shotmaking, striking the backhand beautifully and stepping into the court when the opportunity arose. The Dane also served smart and maintained a good depth, forcing errors from Keys. The American missed so many returns in the first set and although she briefly got back into contention in the second set, she couldn’t sustain the consistency that was required to challenge a rock-solid, Wozniacki.

Sevastova is into her first Slam quarter-final with a 6-4 7-5 victory over Johanna Konta. This result really surprised me because Konta played a brilliant match in her last round against Belinda Bencic and she has been so consistent on hard courts. Credit to Sevastova who played a tactically smart match, mixing up the pace and forcing Konta into uncomfortable positions. The Brit also struggled on serve, winning less than half 50% of points behind her first serve. Sevastova began to wobble towards the end, as would be expected of anyone going for the biggest result of her career. The Latvian player just about kept it together!

GSM Caroline Wozniacki: “This is crazy. After such a tough year to be here and into the quarterfinals is amazing.” #USOpen

#usopen stat: Anastasija #Sevastova is the first Latvian woman to advance to a Grand Slam quarterfinal since 1994. pic.twitter.com/s9Uf8C25jv

Head-to-head record: In their only previous match, Wozniacki defeated Sevastova, 6-3 6-4 in the fourth round of the Australian Open.

Interesting stat: Wozniacki and Sevastova’s only previous meeting also came in uncharted territory for Sevastova when she reached the last 16 of a Slam for the first time. Into a Slam quarter-final for the first time and it’s the Dane who awaits again…

Final thoughts: Wozniacki has been super impressive in her last three rounds; she is moving/defending so well, but also going for her shots, akin to the way she was playing in the second half of 2014. I think this is a sign that she’s finally fit and healthy again. The Dane seems to be thriving at her most successful Slam and has looked very comfortable on Arthur Ashe Stadium so far this week.

Sevastova has also had a great week and kudos to her for backing up the second round upset of Muguruza. Her variety has been inspired this tournament but there will be a question mark as to whether she has what it takes mentally to overcome the defences of Wozniacki. Experience at this stage of a Slam may also be a factor in this match.

Going for Wozniacki in straights…