The women’s singles tournament concluded on Saturday as Serena Williams defeated Angelique Kerber, 7-5 6-3 in a super final. Serena doubled up, winning the doubles title with Venus Williams, beating Yaroslava Shvedova and Timea Babos in another fun final, 6-3 6-4. This post highlights my favourite women’s matches from the fortnight. A Match Points summary is also in the works! 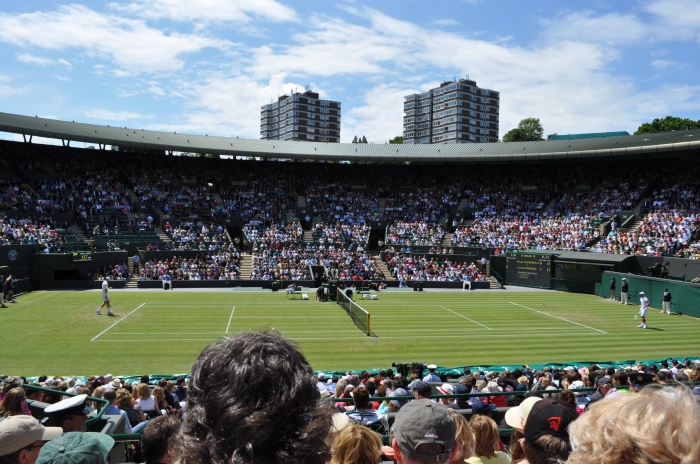 When the Centre Court crowd found out they were getting this extra match between Vandeweghe and Bondarenko, there was a bemused reaction! It may have appeared a strange choice but on a rain-affected day, it was the only match-up in the draw where the second round opponent had already been decided. It turned out to be a super match and the crowd were completely engaged. In particular, the last fifteen minutes were fabulous with some tremendous rallies and every blade of grass being covered. Bondarenko was floored chasing down a ball towards the end of the second set, but kept battling into a second set tiebreak where the American player raised her level to win in straight sets.

This may be the most entertaining 6-2 6-3 match i’ve ever seen! The scoreline masks how good this match was as Bencic produced a masterclass in her first outing on Centre Court. Pironkova didn’t play a bad match at all and was unlucky to draw Bencic in the first round of Wimbledon for the second straight year. The rallies were mostly being won rather than lost as the stats showed. It was such a shame to see BB pull out in the next round due to a wrist injury.

Middle Sunday came into play for the first time since 2004 and the No.1 Court were treated to an excellent women’s match to open proceedings. The quality may have fluctuated but it remained gripping and well contested throughout. Kuznetsova fought back from 2-5 down in the third set to reach the second week of Wimbledon for the first time since 2008. The embrace at the end was lovely to see and Kuznetsova encouraging the crowd to clap for Stephens was such a classy thing to do.

Safarova had a pair of three set epics (also d. Jana Cepelova, 4-6 6-1 12-10 in the third round) but i’ve gone for the match against doubles partner and good friend, Mattek-Sands, which I was fortunate enough to watch live. It was a wild and exhilarating ride as Safarova saved three match points (one in the second set and two in the third set), battling back from hefty deficits in both sets. Despite the tough loss for Beth, the pair shared a nice embrace at the net. For photos and a full recap of the match, click here.

While this was a great match, i’m still so bummed how this one ended. Konjuh played the match of her life, getting within one point of knocking the number three seed, Radwanska, out of Wimbledon. With tremendous power and neat touch, often outsmarting Radwanska, Konjuh demonstrated why her game is so well suited to grass. However match points came and went, and then Konjuh went over on her ankle as she chased a ball up at the net. She battled on valiantly but unfortunately, that was the end of her challenge as a tearful Konjuh lost and Radwanska escaped.

A valiant effort from 18-year-old Konjuh, who limps off after rolling her ankle and pushing Radwanska to the limit https://t.co/bQvBulrLVA

Magic Monday was a great day of women’s tennis with a handful of superb matches. Vesnina came into this fourth round match against her doubles partner, Makarova having failed to win a set against her since 2004 and having never reached a Slam singles quarter-final in her career. In a hard-hitting and compelling match, Vesnina held her nerve after failing to serve out the match at *5-4 in the third set, eventually refocusing to win the last ten points of the match. She would go on to break even more new ground by reaching the Wimbledon semi-finals.

Looking back at her draw path, this was *the* match that seemed to set Serena on her path for glory. In a fantastic encounter under the roof, Serena was forced to fight for her place in the draw against an at-times inspired, McHale. Serena came from a set down and then a break down in the decider before eventually breaking through against a tenacious, McHale. The intensity was awesome to watch and one particular rally in the third set blew my mind!

There were so many extra-time finishes in 2016 and this match was made all the more dramatic with some rain delays at the most awkward of timings, even one on match point! The difference in styles paved for the way for a wonderful match. Kasatkina was playing the Wimbledon main draw for the first time in her career and showed her adaptability, which has been evident on tour all year. Venus, who battled tremendously, came from a break down in the decider to edge through to the second week.

Serena-Angie produced yet another super Slam final. The scoreline may not be indicative of the quality on show but don’t be fooled! There were some stunning rallies, some of the most watchable of the tournament, and the match was played out in great spirits between two players with the utmost respect for each other. For Serena, it was a historic moment reaching #22. For Angie, it was her second Slam final where she once again demonstrated that she has the belief and game to compete at this stage. Serena’s serve and ability to dominate at the net helped her to reverse the result from Melbourne and tie with Stefanie Graf’s Slam tally.

Match of the day, match of the tournament and match of the year for me! This was another captivating edition in the Radwanska-Cibulkova rivalry with all four encounters in 2016 going three sets. Cibulkova produced arguably the performance of her career, smacking away 57 winners in some truly brutal rallies. Radwanska did marvellously well to stay with Cibulkova for so long with her mixture of defence and craft but the Slovak’s fearlessness overcame tired legs at the end to reach her second Wimbledon quarter-final.

"I was really crying, it was emotional"

What it means to reach the #Wimbledon quarter-final, featuring@Cibulkovahttps://t.co/FonJyFtYOn

What were your favourite women’s matches of Wimbledon 2016? Comments always appreciated!

6 thoughts on “Women’s Wimbledon 2016: Best Matches of the Tournament”