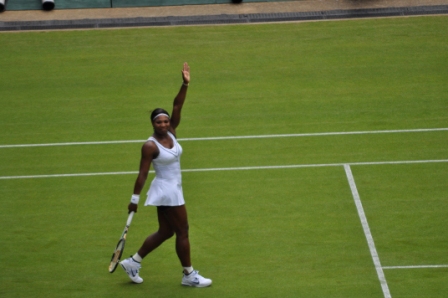 Serena and Angie put on a real show. This was another wonderful women’s final and featured high-quality tennis from the first point to the last. In fact, all three Slam finals this year have been excellent! After the disappointing women’s semi-finals, which received some unfair criticism in the media, i’m CHUFFED we got such a great final played between two champs with genuine respect for each other.

Credit to Kerber who put on a really marvellous display. After saving three break points in her first service game, she was surprisingly secure on serve for the majority of the match. Kerber actually won more points on her second serve compared to her first serve, which is an amazing stat against someone who returns as well as Serena. Kerber produced devilish depth at times and as she has done during this Wimbledon, had a lot of success with her crafty drop shots.

But today was about Serena. The big difference between the Australian Open final and today was the serve. It’s been on it these past few matches and the rhythm was there again for Serena, getting her out of any trouble. Kerber chalked up one break point in the second set but Serena swiftly dismissed it with another ace. Serena produced 13 aces throughout the match; while she won half as many points on the second serve compared to Kerber (39% to 68%), Serena’s first serve was magnificent, dropping just five points behind it.

Another big factor was Serena’s success at the net. The world number one won 16 out of 22 points up at the net (compared to 15 out of 32 net points in Melbourne). Hitting 39 winners to 21 unforced errors, this was a cracking display from Serena and she never really looked back after coming from a set down to beat Christina McHale in the second round.

Kerber played a great match (*that* backhand DTL from way out the court was AMAZING). Serving second in both sets was always going to be tough. She just lost her way in one service game in each set. Two unforced errors in the first set at *5-6 *15-15 was her undoing in the opener. In the second set, Kerber just went off her game with some mis-timed strokes after she missed the break point at 3-3. Serena was so dominant on serve and the pressure on Kerber’s service games was immense. The German player did a fantastic job to hang in there. Once Serena got the break in the second set to go up *5-3 she was never going to let it go, powering her way through the final game.

And the embrace at the net… GOOSEBUMPS.

And the speeches… GOOSEBUMPS.

Summoning the spirits of Wimbledon after hitting the shot of the tournament: pic.twitter.com/kkrlF7zRGy

The craftiness of Serena's ground game is very underrated, and yet Kerber is staying with her stroke by stroke. Aces the big difference.

The best serve in the history of women's tennis has been there every time Serena has needed it
Kerber, playing GREAT, trails for THAT reason

Serena is warmly congratulated at the net by Kerber after winning her 22nd Grand Slam title. https://t.co/y4eiNRGvcl

Serena and Angelique hugging at the net. #Wimbledon pic.twitter.com/MZvyZRIjvP

Serena: "It was difficult not to think about (the record). Knowing how hard I worked, it makes the victory sweeter" pic.twitter.com/OZ6ul7Cosj