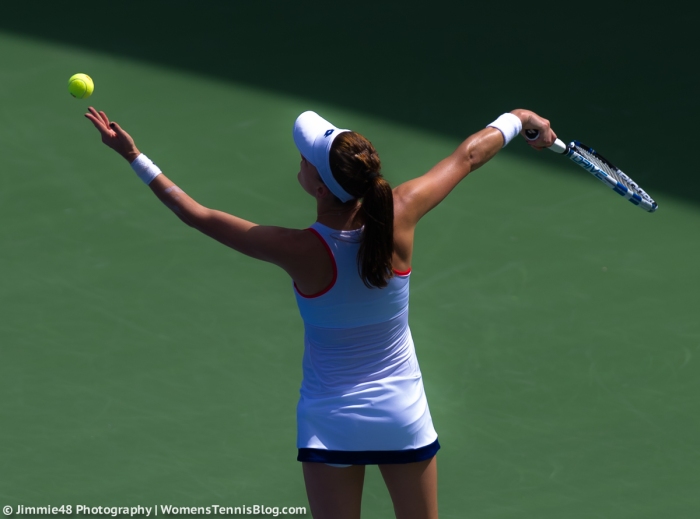 The first of the 2016 Australian Open women’s semi-finals will be contested between the number one seed, Serena Williams and the number four seed, Agnieszka Radwanska. While there have been many surprises, mostly in the fourth quarter, the top half has gone with seeding. Radwanska advanced to the quarter-finals thanks to a straightforward 6-1 6-3 victory over Carla Suárez Navarro. It was one of Radwanska’s better performances of the week although she was given a helping hand by Suárez Navarro’s 45 unforced errors.

Radwanska has dropped just one set during this tournament in a frenetic fourth round match against Anna-Lena Friedsam. The Polish player was 2-5 down in the third set and two points from defeat, but battled hard against a cramping Friedsam. This is the kind of match where Radwanska has come unstuck in the past, getting out-hit by a more aggressive player, but she did well to survive that encounter. Radwanska’s first three wins all came in straight sets against Christina McHale (6-2 6-3), Eugenie Bouchard (6-4 6-2) and Monica Puig (6-4 6-0).

It was more of the same for Serena Williams who sealed her 18th consecutive win against Maria Sharapova with a 6-4 6-1 quarter-final victory in 92 minutes. Sharapova certainly had her chances in the first set; she led 2-0 30-15 after an error-strewn start from Serena but the world number one was soon on level terms. The turning point would be the final two games of the set. Sharapova had two break points on Serena’s service game at 4-4 but both were extinguished; the first on an ace and the second with a forehand putaway. Sharapova then failed to capitalise on game point serving at *4-5 *40-30 as a slice of luck with a lucky net cord allowed Serena to push the game to 40-40. After another tense deuce battle, Serena eventually sealed the opening set with a volley winner.

Serena attributed her sluggish start and a visit from doctor on court to “dealing with food poisoning issues from a few days ago”. Her run through the draw has still been pretty spectacular with wins over Camila Giorgi (6-4 7-5), Su-Wei Hsieh (6-1 6-2), Daria Kasatkina (6-1 6-1) and Margarita Gasparyan (6-2 6-1) .

.@ARadwanska is one match away from making the #AusOpen final. pic.twitter.com/5cEhMdgQTM

Agnieszka #Radwanska progresses through to the SF of #AusOpen Watch more https://t.co/Ek545ZyE1J https://t.co/XFO0YoChdU

.@serenawilliams on serve during the #AusOpen QF pic.twitter.com/6HgZGnqwmv

when you see other people acting foolish pic.twitter.com/wf9c8u23V1

When you're about to go out then your dad says "…is that what you're wearing?" pic.twitter.com/gWidOnJD4I

Head-to-head record: Serena leads Aga, 8-0 in their head-to-head. Aga has won just one set, which came in the 2012 Wimbledon final. The pair haven’t played a competitive match since the WTA Championships in Istanbul in 2013 where Serena won, 6-2 6-4.

Interesting stat: Radwanska has maintained her winning streak which is now at 13 matches. She will be looking to reach her second Grand Slam final…

Analysis: This will be a tough ask for Radwanska to make a dent in this head-to-head against an in-form Serena. She has done extremely well to reach the semi-finals and choosing to skip Sydney as a precaution for the leg injury (which has been heavily taped this week) proved to be a very smart move. The serve will be absolutely crucial for Radwanska in this clash; her second serve will come under attack from the crushing returns of Serena so a high first serve percentage is imperative. This has improved for Radwanska throughout the tournament and was at 69% against CSN.

The world number four can certainly make life difficult for Serena if she can channel AO 2014 vibes when she lit it up against Azarenka in the quarter-finals. Radwanska will have to play the match of her life and/or rely on Serena throwing in a sub-standard performance. Serena has looked super sharp throughout much of the tournament and almost always raises her level at the business end of Slams… I’m going for Serena to reach her seventh Australian Open final.