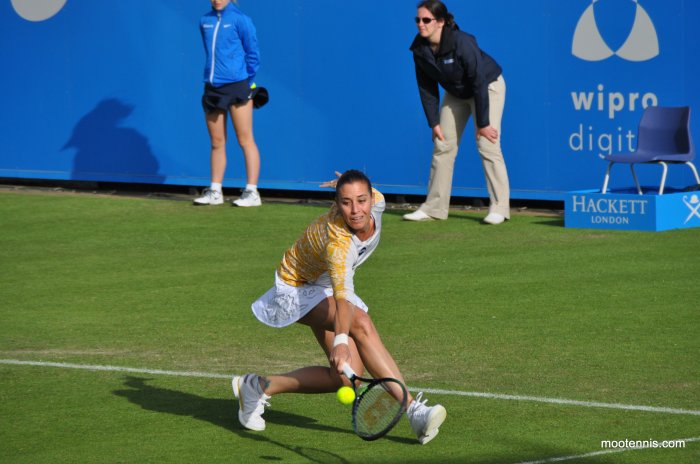 Flavia Pennetta maintained both her superb record against Sam Stosur and at the US Open to reach a sixth quarter-final in seven years in New York. Pennetta won her seventh consecutive match against Stosur, winning, 6-4 6-4 with one break of serve in each set. Of all the players on tour, Stosur has to be one of the most match-up dependent player. She owns some players (6-1 H2H against Na Li) but against others, it’s not soo good! Pennetta played an excellent match, minimising Stosur’s weapons, dictating with her backhand and serving exceptionally well, dropping just five points on her first serve. Stosur carved open some opportunities but just couldn’t do anything with them as Pennetta won most of the big points.

Flavia was quite excited by the win…

Pennetta plays Petra Kvitova in the quarters who by contrast, has reached her first ever US Open quarter-final, completing the quartet of Grand Slam quarters. Kvitova snapped the 16 match winning streak of Johanna Konta, coming through, 6-3 7-5 in 88 minutes. There were just two breaks of serve in the whole match with Konta dropping two service games on double faults. There are only positives to take away from this tournament for Konta who won’t be qualifying for any Grand Slams for a while with her ranking set to soar into the world’s top 60. I really hope she can use this as a springboard to even better success in the future.

We’ve yet to see P3tra this tournament who has had a routine run through the draw. The scheduling has favoured her with two night matches and not having to play in the full heat of the day. Against Pennetta, a player who has had her best results in New York, she’ll face her toughest test yet. Kvitova and Pennetta are tied at 3-3 in their head-to-head although they haven’t played since 2012. Kvitova has won their last three matches including a three set win in their only encounter at a Grand Slam at the Australian Open.

I really like Pennetta’s chances in this match. She has the kind of game that when it’s on, serve and backhand firing, can cause a player like Kvitova to make errors. While Pennetta has struggled this year in match-ups where you’d expect her to win, she has still produced some superb wins on the hard courts over Maria Sharapova (Indian Wells) and Victoria Azarenka (Miami),

Going in Kvitova’s favour is that she is the type of player who locks down at the ends of tournament once she’s into her groove. Further to her four wins in New York, Kvitova is on a eight match winning streak after winning New Haven ten days ago. Despite not being able to practice as much due to her recent announcement that she has Mononucleosis, Kvitova is marching her way through the draw with minimum fuss.

This is a tough pick… I’m going, justtttt, for Petra.