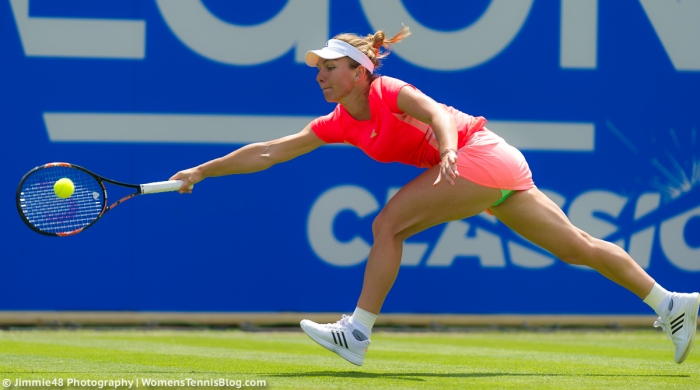 The Victoria Azarenka-Simona Halep match-up has been on my bucket list all year and finally, finally, FINALLY, we will get to see it!  The excitement is very slightly muted after watching a seemingly injured Halep scramble her way into the quarter-finals, coming from a set and a break down to beat Sabine Lisicki in a MESSY match, 6-7(8) 7-5 6-2. To be fair to both players, the conditions were brutal and the heat rule was called into effect after the second set. The first set was extremely tortuous; Lisicki twice led by a break, both times failing to consolidate, and then Halep was unable to serve out the set at *5-4. The Romanian player had a set point but Lisicki broke back.

The set went into the tiebreak where there were actually some decent points. Halep struggled to find the balance between defence and attack, and made a lot of errors off the forehand. Halep had the mini-break at 5-3 but Lisicki knucked down. There was one particular point I have in mind where Lisicki took the pace off and utilised the extreme angle, eventually closing out the point and soon after, the set. Halep looked to be in big trouble, clearing suffering in the heat and hindered by a thigh injury that was strapped up by the trainer on the changeover.

The second set was almost identical to the first with Lisicki twice going up a break and Halep failing to serve out the set. At times, Lisicki was reasonably patient and took the pace off the ball… many other times, she didn’t do this and missed the court altogether! Halep kept fighting hard and eventually toughed out the set. Lisicki took a MTO at the end of the second set with both players going off during the break.

Lisicki seemed to be cramping during the final set as Halep looked to be the more physically stable. A gorgeous volley helped Halep break to *4-2 and she recovered from *0-30 down in the next service game to hold and then break to reach her first ever quarter-final at the US Open. The stats for this match (see below) were NOT pretty! It was a really gutsy win from Halep although it does leave some question marks ahead about her injury.

Sabine just hit a 67 mph FIRST serve into the net.

Azarenka backed up her win over Angelique Kerber with a solid performance against Varvara Lepchenko, winning 6-3 6-4. It wouldn’t have been a surprise if there was a letdown from Vika after that sensational third round match but she was focussed and pumped up during the match. Azarenka failed to serve out the match, playing a little too passively and waiting for errors from Lepchenko. She righted the ship in the next game, breaking for the win.

There was some excellent rallies in the second set and credit to Lepchenko who has improved so much in the last few years. Previously, Lepchenko always seemed to have major lapses in concentration and get tight in crucial moments but she is much more solid these days. Her health derailed her for quite sometime after an excellent start to the year in Australia but she seems to be back playing well again. Azarenka was sporting strapping on her upper arms, looking like armbands, which she revealed in the post-match interview was due to her outfit rubbing on her skin.

Ooh, @FortyDeuceTwits was onto something. Vika says her rash is indeed from rubbing against her shirt. Not good, Nike.

Sooooo… Azarenka v Halep! In their two previous matches, both in 2012, Azarenka beat Halep, 6-3 6-1 in Doha and 6-1 6-1 in Linz. However, these results can kind of be discounted since this was before Halep made her rapid rise up the rankings to relevance on the WTA tour. I’m disappointed that Halep appears not to be 100% although she will have Tuesday to recover. Azarenka herself has had injury concerns so I really hope that injuries doesn’t affect the match in anyway!

Halep strolled through her first three matches, but was below-par against Lisicki. However, winning a match like that, one that could so have easily been the end of her tournament for her, will no doubt have been a confidence boost. Azarenka has played high quality tennis in her last two matches and if she can maintain her proactive gameplan by charging the net, I think she’ll have the edge in this one.

Hoping for a great match! 🙂