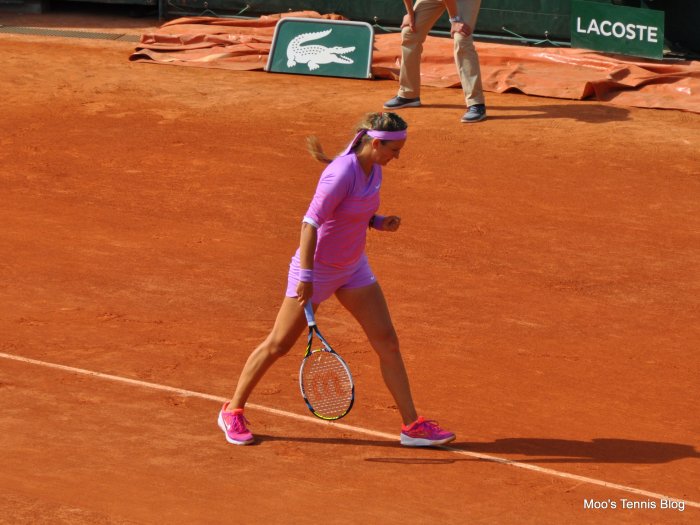 TAKE A BOW, LADIES. The third round match between Victoria Azarenka and Angelique Kerber was one of the most anticipated women’s matches of the tournament… and boy did it deliver! Azarenka defeated Kerber, 7-5 2-6 6-4 in two hours and 52 minutes of quite breathtaking tennis. This may be the heat of the moment but I think that’s my WTA match of the year so far. Without doubt, it’s the best WTA match i’ve watched at the US Open this year. Where this match holds up well against others is that the quality was maintained through all three sets. The rallies were just insane and I loved the way that both players committed to the match. Kerber’s ability to chase down balls rivals anyone on the WTA tour, while Azarenka’s willingness to come into the net and judge the right time to do it was one of the key factors that saw her across the finish line.

Kerber led *5-2 in the first set but Azarenka mounted a superb comeback, playing accurately and aggressively. The set hinged on a titanic six deuce game with Kerber serving for the set at *5-3. Kerber saved five break points, most of them on crashing forehand winners on the line. The way she manages to hit these shots on the run is so impressive. Azarenka kept bringing up the break points and finally converted on a sixth. The next two games also went to deuce but Vika won them both before serving out the set to love.

Kerber could have gone away after losing out on the first set but she never dropped her intensity in the second set. Kerber led 5-2 again but this time, she closed it out with a break of serve. Azarenka couldn’t quite solidify the momentum, committing more unforced errors.

And then the final set… the first point set the mood for what was to come. The rallies were sensational and it was impossible to see who would come through with both players producing some peak play. After the pair exchanged early breaks, Azarenka saved two break points at *1-2 with some clutch play. From this point, Azarenka raised her game to another level. Kerber kept fighting for every single ball. In another marathon game with Kerber serving at *3-5, the German player saved five match points (most of them on ridiculous winners) to force Vika to serve it out… Angie’s reaction to winning that game was EVERYTHING.

Serving for the match, Vika did not buckle. I loved the embrace at the end. This match was just sensational. I’m throwing all these adjectives at it but it’s not enough. If you missed it, I couldn’t recommend more watching this match in its full entirety. It’s a shame these two had to play in the third round and it was another tough loss for Angie in the third round of a Slam and i’m gutted for her. She gave it her absolute all but once again, just came up short. This is yet another match of the year contender featuring Kerber… I think she’s in all of my top five!

Vika showed an exceptionally high level during parts of this match but she will need to knuckle down if she’s going to progress deeper in the draw. Azarenka plays Varvara Lepchenko in the fourth round after the American player beat Mona Barthel in three sets.

I’m absolutely buzzing right now. I couldn’t keep my eyes open a few hours ago but now i’m wide awake! I’ll leave you with some tweets from the end of the match…

When matches actually live up to the hype pic.twitter.com/0zn70vkfXh

Please let this match go on forever and ever.

Great celebration and even greater hug and embrace at the net from Vika Azarenka and Angelique Kerber https://t.co/1ybvIDMOvj

Nice exchange at the net between Kerber and Azarenka. Incredible match. pic.twitter.com/3Y5ITDhfks

"Between finish & punish he came up with the pinish" – Victoria Azarenka https://t.co/QmXBUdiniM

6 thoughts on “US Open Day 6: Match of the year contender, Vika and Angie put on a show!”