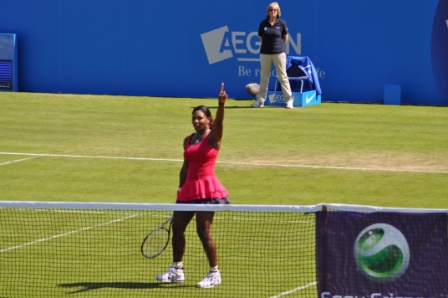 Serena Williams won her 21st Grand Slam title and claimed the Serena Slam for the second time in her career, beating Garbine Muguruza, 6-4 6-4 in the 2015 Wimbledon final. It was a topsy-turvy final which had some wonderful moments. It had started in nervous fashion for Serena who threw in three double faults in her first service game. It was a perfect start for Muguruza who needed to start well and DID start well! She consolidated the early break to go up 2-0. The Spaniard was up 2-0 30-0* before Williams started to find her rhythm.

Muguruza maintained her lead to 4-2, saving two break points with a superb hold from *3-2 *15-40 down where she really stepped up her aggression and carried on from her previous matches at Wimbledon, saving her best tennis for the big points. Williams was starting to fly through her service games though and look more settled. The world number one won four straight games, getting her serve going and ramping up the intensity of her groundstrokes.

Williams looked unstoppable in the second set as Muguruza began to make some errors, particularly on the forehand side. However, similar to the French Open final where Serena lost the second set from *4-1 up, there was a wobble. Williams twice failed to serve out the match as Muguruza really stepped up her game and went all in for one last time. The game with Williams serving at *5-3 was the best of the match. The American player swiped away three break points at *0-40 with some tremendous serving. It looked like the end was two points away, but Muguruza was not perturbed and really WON that game. It was a shame that she was unable to consolidate in the next game, but it was always going to be a tough ask. The match ended in bizarre fashion withe the crowd seemingly unaware that Serena had won the match.

It was a really entertaining final and Garbine gave a great account of herself. Serena is just too good… that serve! It wobbled at times but the serve was ALWAYS on hand to get her out of trouble when she most needed it. Serena currently holds all four Slams and has therefore secured her second Serena Slam. The world number one has had a breathtaking year and is currently at 39-1. Serena goes for the Calendar Slam at the US Open, which promises to be a fascinating narrative.

I loved the trophy ceremony where both were in good spirits. There were tears from Garbine which was kind of good to see because it showed that she wanted it and believed she could win. I have no doubt that she will be back winning Slams in the future. It will be interesting to see how she responds, particularly when you look at some of the recent Wimbledon finalists and how they have struggled. I really do believe in Garbine though. It wouldn’t be a surprise if the Spaniard stalled for a time but I think she’s got it and she will be back in a Grand Slam final sooner rather than later.

Muguruza got a rousing applause from the crowd (and Serena!) and she was so cute in her interview. I have such a soft spot for her… she’s enchanting! I loved the respect between the two players and I come away from that final feeling happy 🙂

In a dramatic, high-powered match of sublime stretches & shaky ones, Serena Williams hangs on to beat Muguruza, 64 64 for the title.

THIS WAS SO LOVELY ❤ well done, ladies! pic.twitter.com/LJ9RK7eC6N

Muguruza: "I want to say congrats to Serena! She's still showing us that she's world No. 1" #Wimbledon pic.twitter.com/aZg8IdUYPm

Amazing speeches from both. Garbine definitely has Slams coming her way, and Serena is an unbelievable Champion. The greatest of all time.

Beating Venus, Azarenka, Sharapova, and Muguruza dropping just one set en-route to the title. Safe to say, Serena deserved this one. Oh yes.

This is also my new everything. Serena! https://t.co/6DjZp4hYQf

@pearlescent48 HER REACTION TO THIS WAS JUST TOO CUTE THO. OMG she just charms the pants off me. What a QT.