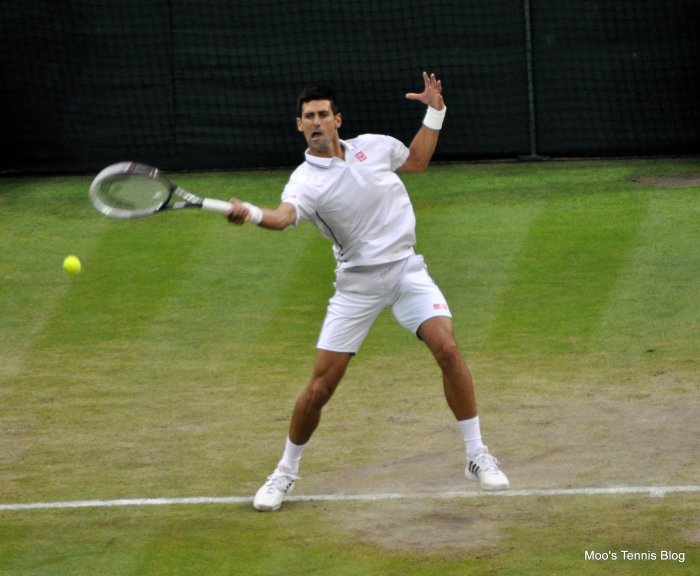 Novak Djokovic won his ninth Grand Slam title and third Wimbledon title with a four set victory over Roger Federer in the 2015 Wimbledon final, 7-6(1) 6-7(10) 6-4 6-3. While the second set had some tremendous moments, the match was a little flat and subdued after the rain delay in the third set. I have to confess that I always struggle to really enjoy men’s finals as it is the last day of Wimbledon and the last day of holidays for me! Federer had the opportunities in the first set, going up a break at *3-2 (but unable to consolidate) and having two break points on Djokovic’s serve at 6-5. However, Djokovic played a great first set tiebreak and Federer… didn’t. 59% first serves in wasn’t going to cut it.

The second set was the highlight of the men’s final. While the tennis was superb at times, neither played their best tennis when a potential opportunity arose. The set ebbed into the tiebreak where Federer saved seven set points to level up the match. It was a stunning effort from Federer who was clutch on so many of the set points which felt like virtual match points.

I still can’t get over how well Novak responds to adversity and we’ve seen it soooo many times. His response to losing that second set was admirable. Add to that, the disappointment he must have felt after the crushing defeat at Roland Garros. Djokovic played an excellent final two sets and was fully deserving of the victory. After the rain delay, the match lost its bite and Federer just could not rival Djokovic’s unnerving consistency. The Serb hit 23 winners to 5 unforced errors in the last two sets. Although there was a disappointingly muted response when Djokovic won, it was a nice trophy ceremony with super speeches from both.

In the final match of the Wimbledon 2015 Championships, Martina Hingis and Leander Paes delivered a mixed doubles masterclass, beating Timea Babos and Alexander Peya, 6-1 6-1. Also, a shout-out to the women’s doubles final on Saturday night which was FANTASTIC. Hingis did the double, teaming up with Sania Mirza to beat Ekaterina Makarova and Elena Vesnina, 5-7 7-6(4) 7-5 in what was easily the best final of the weekend. It was a tough one for the Russian pair who had led 5-2 in the third set.