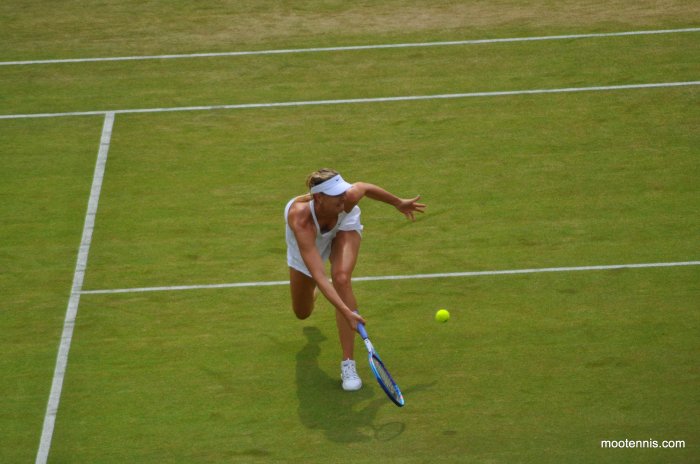 The two highest seeds in the top half of the women’s draw have progressed to the Wimbledon semi-finals which will be played on Thursday. Serena Williams and Maria Sharapova were both pushed hard in their quarters, needing three sets to prevail. In the first quarter-final of the day, Sharapova overcame a spirited effort from CoCo Vandeweghe, 6-3 6-7(3) 6-2 in two hours and 46 minutes. Considering it was her first Grand Slam quarter-final, CoCo put up a really decent showing. She was the better player early on, forcing four break points in Sharapova’s first two service games. The pair exchanged breaks early on before Sharapova played two excellent games, getting returns in court and hitting with consistent depth and margin. Sharapova won the first set, 6-3.

Vandeweghe was frequently getting pissed at Sharapova who was moving on the baseline. She kept mentioning it to the umpire and seemed to suggest she would say something about it… WE WERE ALL HOPING SHE WOULD SAY SOMETHING TO MARIA! CoCo is a real character; she tried to get the crowd going and succeeded.

When your jam comes on in the club pic.twitter.com/UomkoC5kcz

Sharapova led by a break in the second set, but failed to serve out the match with a very poor game at *5-4 including a double fault. Vandeweghe broke and then hung on for dear life in a four deuce game at 5-5, saving two break points. Vandeweghe had two set points on Sharapova’s serve at *5-6 but it went into the tiebreak where the American was rejuvenated and forced a third set. Scattered throughout the match were some lovely points where Vandeweghe went toe-to-toe with Sharapova before finishing off in style at the net. Sharapova eventually came through the third set, 6-2 but it was not easy at all.

Serena had to come from a set down for the third time this year to defeat Victoria Azarenka, 3-6 6-2 6-3 in what was a great match. Some of the tennis in the second set was just sensational. The quality and intensity of the rallies was like nothing i’d seen from the women all year. It was the game with Vika serving at *1-2 featuring six deuces that blew me away. The Belarusian saved three break points to hold in what was an awesome effort. Azarenka was at her very best in the first and second sets, dragging Serena all over the court with angles and serving extremely well.

Serena finally made her breakthrough at 3-2 and didn’t look back, saving a couple more break points at 4-2 en route to winning the second set, 6-2. Serena’s stats in the second set were magnificent; 5 aces, 8 points dropped on serve, 7/7 on net points and 17 winners to just THREE unforced errors. Serena carried that form into the decider where she quickly broke and threatened the double break lead. Azarenka fought valiantly to stay in touch, even earning a break back point when Serena served for the match. A couple of booming serves sealed the win for Serena who won her 18th three set match in a row. The pair combined for 66 winners and 23 unforced errors… a super match. I loved Vika’s press conference afterwards, of which highlights are provided below…

In the Serena-Maria head-to-head, Serena has won 17 of their 19 clashes and Maria hasn’t won since 2004. They have only play three times on grass with Sharapova famously winning the title match in 2004 and Williams winning their other two matches; a tight two setter in 2010 and the Olympics final where Serena lost just one game. Their last match in the final of the Australian Open was actually a great match. It remains some of the highest quality tennis we’ve seen from the women this year. Serena won, 6-3 7-6(5), but Maria played extremely well in the second set to keep it close.

Maria has yet to play a top 30 player this fortnight and Vandeweghe was her first real test of the tournament. Serena has been pushed to the brink by Heather Watson and Azarenka, but come through with flying colours. Maria will have to bring up her level by several notches to compete with Serena who has played some superb tennis in her last two matches. It’s always a special occasion when these two play but the head-to-head record looms over Maria like a rain cloud and to be honest, I don’t see her challenging Serena in this semi-final.