For the first day of Roland Garros 2015, I was lucky enough to get tickets for Suzanne Lenglen Court. Before I left for Paris, I was desperate to know the order of play, so much so, that I was refreshing the schedule page on the French Open practically every minute! Anyway, when it eventually came, I was thrilled. We had Ekaterina Makarova, Stan Wawrinka, Kei Nishikori and Ana Ivanovic. I was chuffed to get Stan and Kei, both players I have barely any photos of.

Fast forward to Sunday and we took up our seats for the first match between Ekaterina Makarova and Louisa Chirico. We were so lucky with the weather, which I had been checking constantly! It was a glorious start to the day and rather surreal to be at the French Open! To be honest, I was a little disappointed with our seats. There are three categories of seating for Suzanne Lenglen and I’d bought the middle category. Our seats though were just a couple of rows from the back! We still had a pretty decent view and with the stadium being so empty to begin with, as is the norm with Parisien crowds, we had a great view for the women’s match. I stayed for a set and a half, and it was an enjoyable match even if the atmosphere was somewhat lacking. 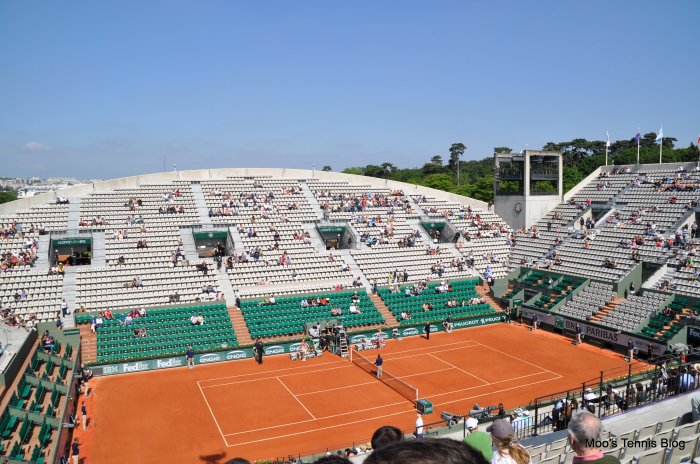 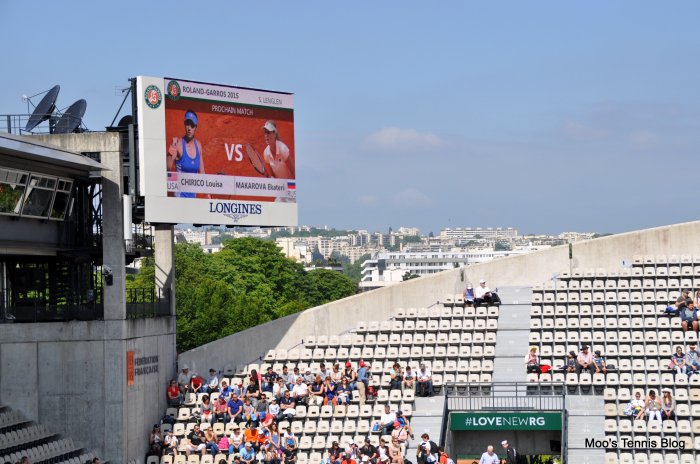 Makarova started well, playing with good depth and taking advantage of Chirico’s obvious nerves and inexperience. Chirico though competed extremely well and stayed with Makarova all the way through the first set. Twice, she came from *0-40 down with some really gutsy play. It’s the first time I have ever seen Chirico play, who has a decent serve and nice groundstrokes. The photo below, Chirico used on her Instagram account (Thanks Adrin on Twitter for letting me know!) 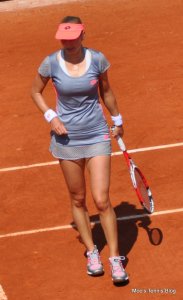 Makarova became increasingly frustrated with her inability to take break point opportunities. Unsurprisingly,  when she stepped up to serve for the match she faced a few break points. Makarova has become much feistier and more animated on court of late. I don’t think it’s helping her to be honest but she must feel some pressure now as a top ten player. Makarova held on for the set with a huge roar.  There were quite a few outbursts at the end of the first set. After Makarova broke to go up again the set 2 we left to go and wander the outside courts.

We came back for Suzanne Lenglen for the second match featuring Stan Wawrinka and Marsel Ilhan. I’d only ever seen Stan play once before at the O2 and I only have two pictures of him, one of his back (!) so I was thrilled to get Stan. One issue we noticed with Suzanne Lenglen was getting into the court. We arrived after the match had begun and the queue was so long at our gate! We didn’t even get in at the first changeover. Stan and Marsel then decided to play a really long deuce game so we were waiting for about 20 minutes which was a pain. They had a TV just by the gate but you could hear the crowd reaction to a point before it happened the TV! 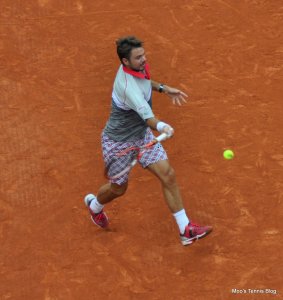 After a shaky first set, Stan played a pretty solid match. He looked completely nonchalant in the first set and the crowd didn’t really get involved. I love watching Stan and he was hitting plenty of winners in this match. The backhand down-the-line is just joyous to watch. Ilhan put up very little resistance and was particularly disappointing in the third set as Stan strolled to victory. 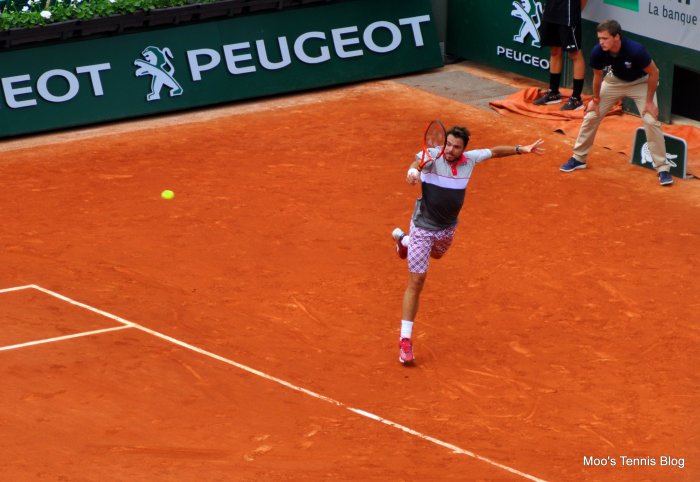 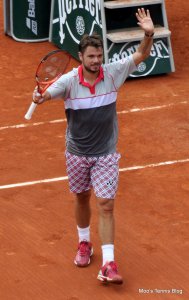 The final match we watched on Suzanne Lenglen  was the one I was was most excited about featuring Kei Nishikori against Paul-Henri Mathieu. I’ve been wanting to watch Kei for years. Last year, I made desperate attempts just to get a picture of Kei. My brother and I were at Wimbledon waiting by court 3 and we knew Kei would walk past us to his court for his match. I tried getting a shot but my camera just wouldn’t focus! Finally now I have some pictures!!!! These were my best pictures from Suzanne Lenglen court and the sun was perfect. It was pretty hot on Suzanne Lenglen. I can’t deal with heat… 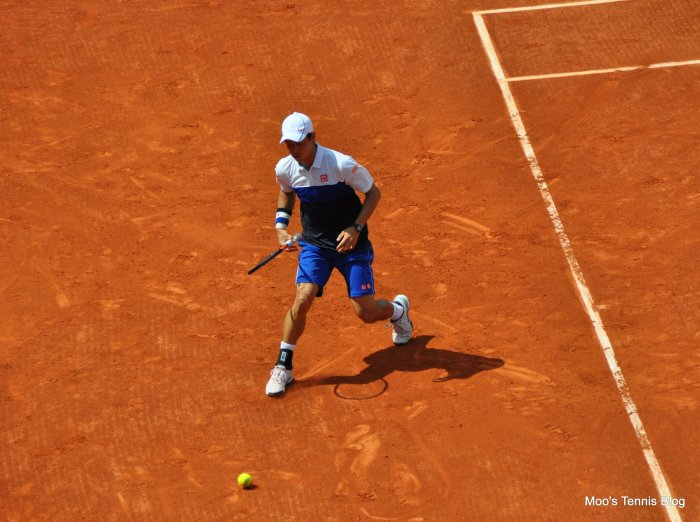 Nishikori’s  match against Mathieu was a fun one, particularly with the crowd support for Mathieu. The French crowd really get behind their players and I was impressed with how they pulled Mathieu through the second set. Back to the first set and Kei played some fantastic points to get the early break (he was pumped early on – see picture below) and then was solid for the remainder of the set, eventually winning it, 6-3.  Mathieu really gave it a go in the second set and was dictating many of the rallies. Kei didn’t get many free points with his serve and was just about hanging in. They traded breaks a few times and Mathieu did go up a break at one point, but it was Nishikori who was the more solid and reliable player. He had some comfortable service games at the end of the second set and then broke at 6-5 for the set on a very lucky net cord. This got boos from the dejected French crowd. 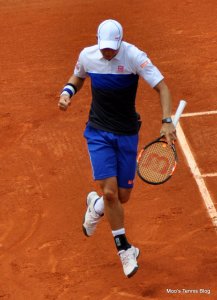 The French crowd always annoy me watching on TV, but strangely enough, they were fun to be a part of! I love all the French crowd-isms and it really made for a great atmosphere. Some of the people doing all the ba da ba da ba da’s were sat in our row. I was also impressed with their mexican wave too which was very co-ordinated! I love how the crowd always claps themselves after a mexican wave as the players are waiting to get on with the match. Nishikori broke Mathieu and the French crowd’s spirit in the third set and romped home for a straight sets win. It was a good match and Mathieu got a nice ovation at the end. 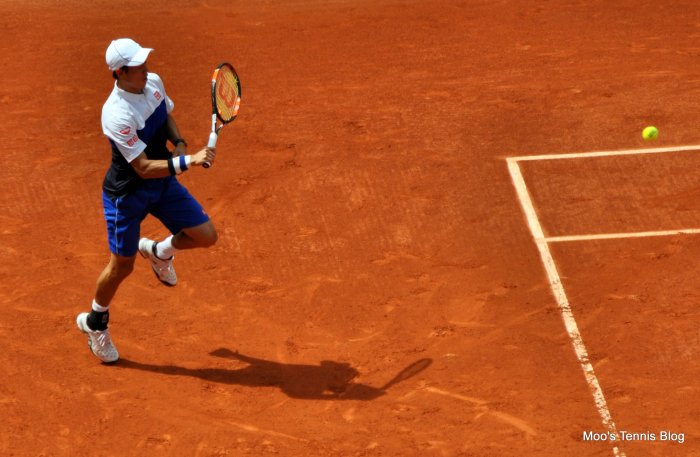 Suzanne Lenglen was fun although i’d love to try Phillipe Chatrier next time. Still to come in my accounts from RG… court 1, the outside courts, best photos from the two days and thoughts about the overall RG experience.

2 thoughts on “Roland Garros 2015: A day on Suzanne Lenglen Court”