For the past couple of years, I had wanted to visit Roland Garros but always put it off with the “oh I’ll do it next year”. It looked like the same would happen this year when my plans fell through beforehand. When the big release for tickets arrived in March, I thought i’d get in the queue and see what was left. When I brought up the page and it said I was something like 50,000th in the queue and would had to wait four hours, I thought my decision was made. After an hour and a half, I finally got through and there were tickets available. I’m normally very indecisive but this time I thought, screw it… LET’S GO TO ROLAND GARROS!

I love Paris so for my first venture of live tennis outside of the UK, it was always going to be Roland Garros. I’d also heard so many great things about the tournament from people on Twitter. I went with a friend from work and we got the Eurostar from London St Pancras to Gare du Nord. Trying to choose a hotel in Paris was difficult but in the end, we went for one based in Cambronne that I had stayed at before. It was a great location with plenty of local bars, cafes and restaurants, and just a ten minute walk to the Eiffel Tower to feed my thirst for a bit of sightseeing. There was also a direct metro line to Roland Garros just a 5 minute walk away.

The buzz of going to a new tournament is something I hadn’t experienced for quite a few years. I was both excited and nervous! There are several metro lines that serve Roland Garros but we came in at Porte d’Auteil. It was very straightforward getting to the venue with a ten minute walk from the metro station and stewards very clearly showing the way. I was a bit worried about getting my camera through security although I took my smaller lens (18-200mm) which it said would be OK. A few people on Twitter (thanks to @elissetennis for all the great tips!) had warned me that they do enforce the policy of nothing more than 20cm. After a bag check you then have to scan your tickets and show your ID. You then get this tiny little ticket. I lost it at least twice on the first day…

And then we were in! It took a while to get a lay of the land so we walked around the whole venue to get a feel for everything. Here are some of my overriding thoughts after two day at Roland Garros.

One of the big disappointments for me was no designated area for practice courts. One of my favourite things about going to a tournament is watching players practice as it’s something that you can’t do as a fan watching on TV. Although there were players practising on the outside courts on the Sunday, there were less opportunities on the Monday. Courts 12 and 15 seem to be used exclusively for practices which was nice. There was never a problem getting to the front of Court 15 and we saw Aga practice here. Perhaps it was my lack of RG insider knowledge. Looking on Google Maps, I noticed there’s a cluster of courts away from the the venue and it seems that the top players practice away from the actual venue. This is one of the reasons why I love Eastbourne so much as you can get right up close to the practice courts and you often pick up little tidbits too. It’s also fun to see who practises with who 😉 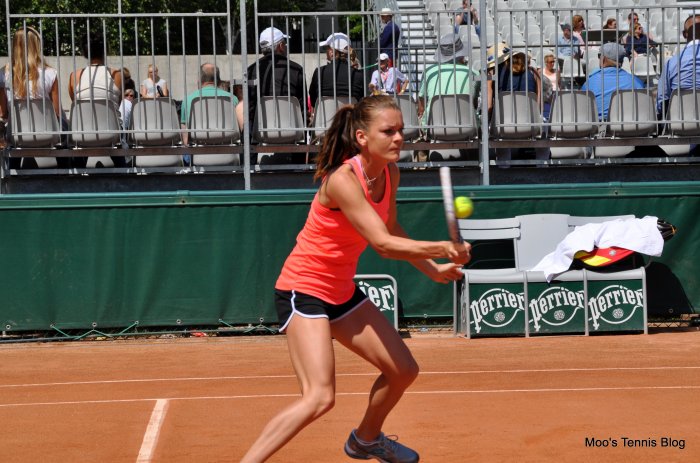 The queues and PEOPLE

I knew it was going to busy but I wasn’t quite prepared for howwww busy! Sunday was much quieter. The atmosphere wasn’t quite there, but it was a nice introduction to Roland Garros. Monday though was so busy on the outside courts. There were many courts I tried to get onto without success. I wanted to see Mona Barthel and Dominic Thiem on courts 4 and 5 respectively but both had big queues out of the courts. We kept going from queue to queue, changing our minds about which one was least long! The one for court 3 on Monday where Sam Stosur was playing at the time and Nick Kyrgios was set to play was just HUGE! It snaked all the way out of court 3 and past court 2. Wimbledon is busy, but it felt more pronounced at Roland Garros and never really died down, even past 6pm local time.

The best tactic I found was to head to a court before the match I wanted to see finished. I wanted to see Kerber-Babos on Court 2 on the Monday and started queueing before Fognini finished his match. The court then empties and you can get in! It required a lot of planning and organisation, and I wasn’t as prepared as I could have been. 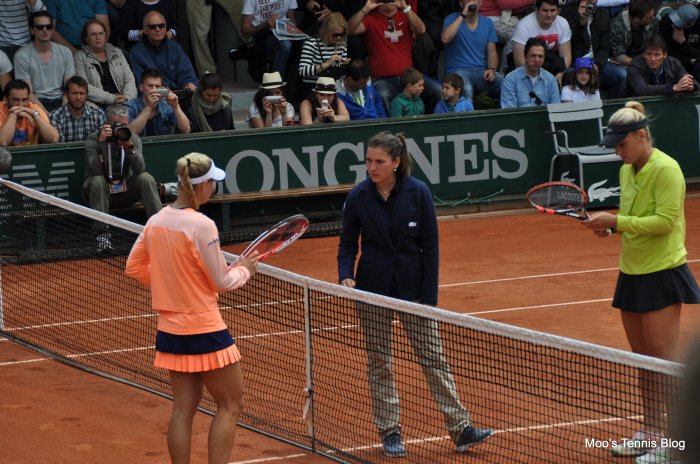 Security on the outside courts was poor

This was one of my main gripes. The security of letting people in and out on the outside courts was poor. The sheer volume of people trying to get in on changeovers meant there were always people still trying to find seats or leaving when play started. We tried to get in for the Coric-Querrey match on court 6. We got in at one of the changeovers but because you couldn’t see the court until you got in, realised that play had already started! It was so embarassing as we tried to locate two empty seats and then had to do the walk of shame, pissing people off as we lumbered over them. This is something they do so well at Wimbledon and the stewards are on point with locating  where the empty seats are. Court 17 was also a bit of a nightmare with many people just sitting on the stairs with no-one in the actual court to control this.

My 3G wasn’t working on the Sunday and for large chunks of Monday. I didn’t know any of the results on Sunday as we couldn’t find a scoreboard! We only realised on Monday there’s a big screen outside of Suzanne Lenglen that often showed scores but other than that, it was difficult to know what was going on. I wanted to know what was going on on Court 2 with Lucie’s court on the Sunday! They did start to put up scores during the changeovers on Suzanne Lenglen during the Stan and Kei matches but it would have been nice to have a few more scoreboards around the place. Even when my 3G is working, my phone battery is normally dead by the afternoon!

I love to complain… RG made me realise how comfortable the seats are at Wimbledon. It may not seem like a big deal but if you are watching a gripping, lengthy match, it’s hard to stay in your seat for more than an hour or two without needing to shake the legs!

Roland Garros is noticeably smaller than Wimbledon but it still has that Grand Slam kind of vibe but with a more intimate feel to it. I loved all the green as well! Compared to Wimbledon, it’s much easier to get from one end to the other and I do like to wander… 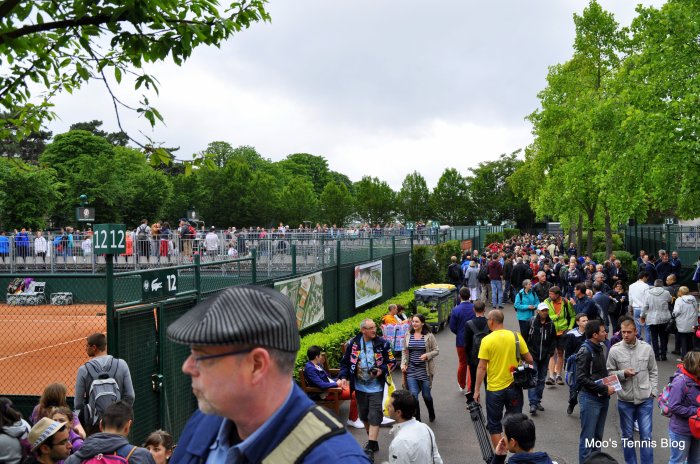 There were quite a few courts I didn’t manage to get on, but I did get on Court 2 and loved it! It’s such an intimate court and there isn’t a court like it at Wimbledon. The atmosphere was great for all three matches I saw here. Also, the sun in the evening was gorgeous for taking photos. 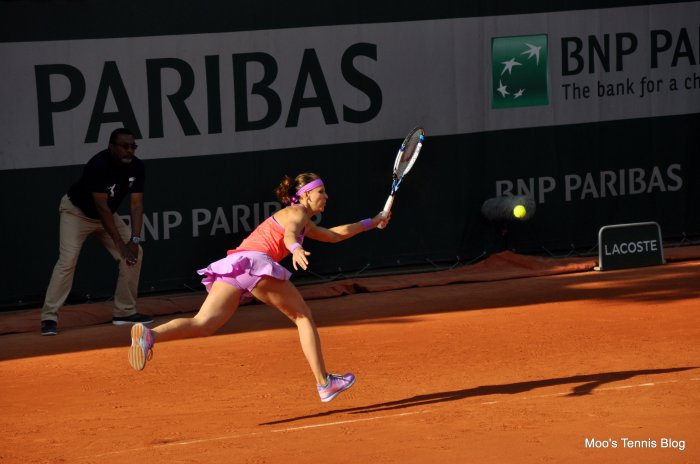 When I watch the French Open on the TV, the crowds drive me mad. Being part of them, I though they were great and a real hoot to be a part off. They were so supportive of their players and they were on the whole, very knowledgable. I quite liked all the French crowd-ism where they call out “allezzzz” and do all the “da da da da da olee”. Perhaps I was just in a good mood!

I didn’t have time to pick up anything before going to Roland Garros so ended up buying at the venue. There are plenty of places for food with many stalls selling drinks and sandwiches. The set menus for a drink and a sandwich/hot dog/salad was 7 Euros. Prices were expensive, but didn’t shock me at all. There were also two shops, one on one side of Suzanne Lenglen court which had more sandwich options. I’m a fuzzy eater but didn’t have any problems finding something. They also sold Sugarpova and it’s POSSIBLE I may have bought some hahaha. A tip though – if you’re like me and spend your whole time watching tennis, buy your food early as they tend to get very busy around lunchtime and you can waste time in  queues.

I love taking pictures of the clay. LOVE, LOVE, LOVE! In the late afternoon to evening, the light was just magical at Roland Garros for taking pictures. I was quite pleased with my pictures and this never happens. I’m normally never happy with them. 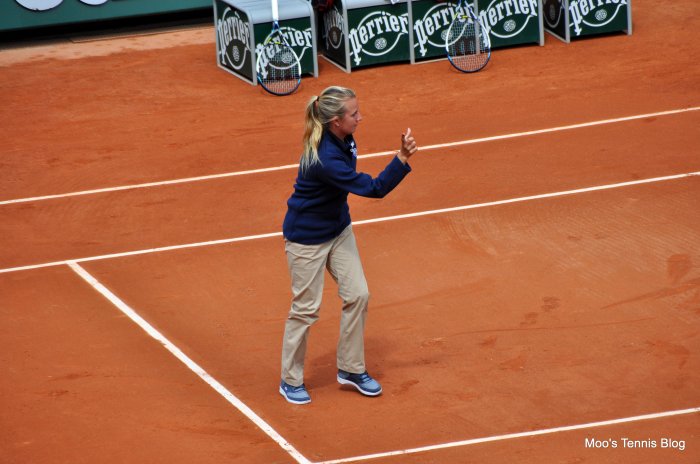 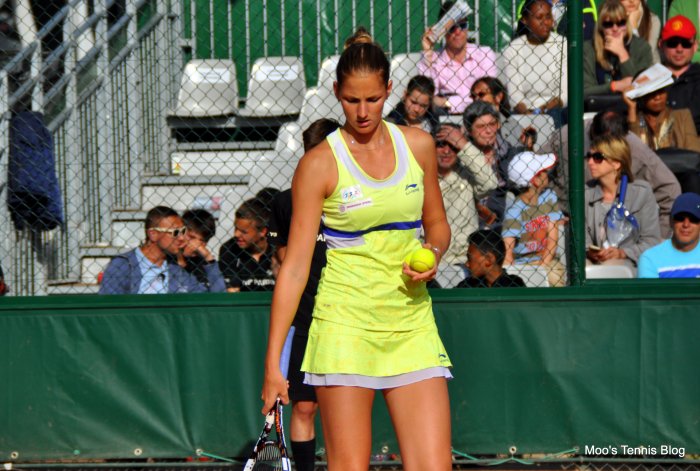 I loved experiencing Roland Garros for the first time and watching clay court tennis. It is kind of a surreal feeling and I can’t believe I went, particularly now after a week back at work. I keep watching all the courts and saying ooo I was there. My brother is already completely fed up with me. I’d love to go again although I may leave it one year. My family are planning a holiday during RG next year… Can you believe it?! If anyone has any questions about visiting RG, I’m more than happy to answer. I hope you enjoyed my accounts from RG as they’ve been a ball to write. I love reading other people’s accounts from tournaments so always like to reciprocate. My next live event is Eastbourne and i’ll be there for at least three full days. If there’s any content you’d like to see on mootennis.com for Eastbourne then please let me know! It’s a given that i’ll be sharing plenty of pictures 😀

If you missed any of my RG dedicated posts, check out the rest below…

If you enjoyed this post, you might like my page of tournament experiences HERE featuring all my trips to Wimbledon, Eastbourne, Birmingham, Queens and the O2. Once the tournament is over, i’ll be adding my Roland Garros posts here too.

15 thoughts on “Roland Garros 2015: My experiences of visiting for the first time”