This is the annual post on Moo’s Tennis Blog where I attempt to predict next year’s season end rankings. 2019 was a shocker as I correctly predicted four of the world’s top ten. I’ve spent weeks deliberating my top ten and i’m still not entirely happy but here goes! Please sound off in the comments with your top ten predictions 😁.

Muguruza is one of the most fascinating players on the tour and I just can’t figure her out. I thought she competed well in 2019 but was held back by her increasingly passive tactics. Now back with Conchita Martinez (the coaching announcement of this year’s off-season that filled me with the most joy), I still have faith that Muguruza can rediscover her best form. My expectations are tempered compared to last year where I had her at number two but she’s too good to be languishing outside of the world’s top 30. She will always be one of my favourites for the French Open title.

I’ve omitted Serena from my top ten for the past few years but have her sneaking in this time round. She’s never going to be high on my list, purely for the fact that she plays so few tour events. Key to winning her 24th Slam is playing more matches and I think winning a title somewhere on the tour would be huge. If she keeps putting herself in Slam finals, surely it’s going to happen?

Andreescu is a curious one for me. Her rise in 2019 was incredibly rapid as she started the year outside of the world’s top 150 and finished it inside the top five with a first Major. I do have my concerns as to whether it all catches up with her. Will she start to think, or feel some expectation? She’s an extraordinary competitor and her game has so many layers that I cannot ignore her in my list.

I’m sold on Muchova’s game. I think she will win Slams although probably a push for 2020. Muchova has plenty of ground to make up next year having not played Indian Wells, Madrid, Rome, Canada or Cincy in 2019. Her variety reminds me of Barty and I think her game has the potential to be even more complete than Ash.

Pliskova is a safe lock for the top ten in my opinion. She’s consistent and clutch on the tour, and frequently manages to rescue herself from precarious positions to post solid results across the board. Interestingly, it’s a completely different story at the Slams where she experienced tough losses at the last two Slams. I’m still not convinced she will win a Slam in 2020.

No strong feelings for Halep but similar to Pliskova, she’s a definite for the top ten barring any injuries. Along with Muguruza, she will always be a favourite for Roland Garros. Pairing up with Darren Cahill again surely will be a boost, even if their exchanges in Shenzhen were not exactly harmonious.

Despite finishing the season at world number one, I still feel Barty was underappreciated in 2019. The year is so long and she kept such a consistently high level from start to finish with titles on all surfaces. I do think the rest of the challengers will be hungry to topple her in 2020 and i’d be surprised if she can maintain her position at number one. Her game has so much variety and she has such a wise tennis brain that I think she will be there or thereabouts. I’m going for Ash to win Wimbledon next year. She loves the grass but it’s never quite come together for her at SW19 yet.

I omitted Osaka from my top ten countdown in 2019 but I don’t have the same reservations for 2020. There were plenty of ups and downs this year, yet it was still a fabulous season which was bookended with titles in Melbourne and Beijing. She’ll definitely win more Slams in my opinion (going for one more in 2020) and i’m still convinced her game can marry up with the grass despite her struggles this year.

I think that Kenin will win a Slam in 2020. I’ve always been impressed with her mentality and how she backs herself on court. I viewed Kenin as a counter-puncher back in 2018 but I completely changed my opinion in 2019. The young American had an aggressive, fearless edge. While she still displayed some inconsistencies this year, I think the belief she has in herself is going to take her far.

Third time lucky? I’ve gone for Svitolina as my world number one again. I feel that if she can stay healthy, she is the most consistent player across all surfaces. I’m still not sold on whether she can win a Slam but I think she’s going to win a shedload of points at the tour level. 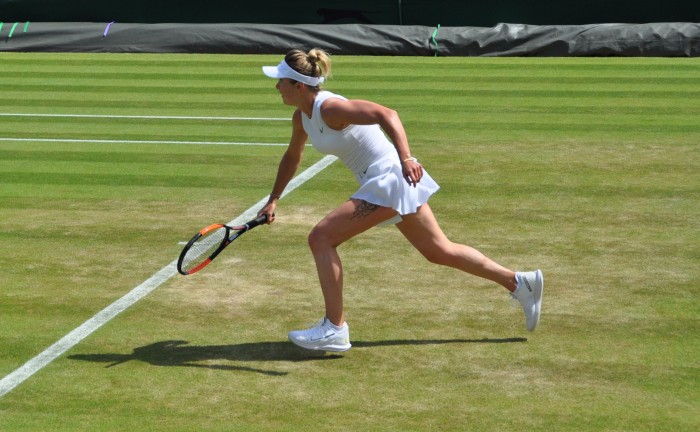 Best of the rest:

Elise Mertens: One of the most reliable and consistent players on the tour. Went under-the-radar for much of 2019 but I think she’ll be more prominent in 2020. No.11.

Belinda Bencic: Probably 2nd on my list of contenders for Wimbledon behind Barty. Injuries and composure on court at times still worry me. No. 12.

Aryna Sabalenka: I can’t believe Sabalenka finished at number 11 after what felt like a mostly disappointing season. Just like 2018, she ended the season on a super high. Her power is undeniable but it’s the mental side that still concerns me. No.13.

Amanda Anisimova: The 18-year-old is no longer restricted by her age so can play a full schedule. Her backhand is world-class and composure on court already sets her apart from the rest. She’s a future world number one and Slam champ IMO. I think her big breakthrough will come in 2021. No.14.

Petra Kvitova: I want Peak Petra to win another Slam but struggled to fit her in my top 10! Wary about her consistency in 2020. No.15.