It is time to review last year’s predictions! Actually, they weren’t that bad as I correctly predicted six of this year’s season ending top ten and managed to get Kvitova’s position spot on. Before posting my predictions for 2019, let’s take a look back at some of my statements from last year’s post and how they stacked up against reality. 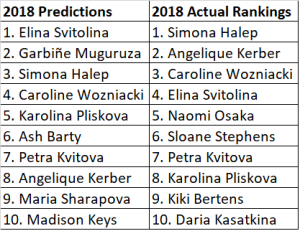 If she can stay healthy, I think that Sharapova will sneak back into the world’s top ten again with at least one deep run at a Slam.

Hmmm… Sharapova did have a relatively deepish run at the French Open where she reached the quarter-finals, but finished the year at number 29 in the rankings. She ended her season early due to a shoulder injury.

I think that Kerber will thrive out of the spotlight and with a point to prove to get back into the world’s top ten.

I was right about Kerber’s trajectory although only had her sneaking into the top ten at 8. The German player had a sensational year, adding Wimbledon to her tally of Slams and finishing the year at world number 2.

I still remain a tad skeptical as to whether Wozniacki can string together seven match wins and triumph at a Slam. The Dane would likely have to get past an in-form big hitter and on a quick surface, compared to Singapore where she recently triumphed.

Nope! Wozniacki went onto win her first Slam in Melbourne.

I’ve been yoyoing on Muguruza for the past few years but i’m currently high on the Spaniard.

Svitolina has improved her season-end ranking every single year she has been on the tour and I think she will do it again in 2018. Top of my list of newbies to win a first Slam.

I was right to have Svitolina moving up the rankings again but was off with my prediction that she’d win a Slam.

I’ll never lose hope that Pavlyuchenkova will be able to put it all together on a consistent basis and improve her focus in matches. A top 12 finish.

Oh dear. I don’t think i’ve lost hope just yet but I am definitely not as high on Pavs as I was last year.

I think there is a long way to go for Kasatkina in terms of finding the balance between defence and attack, but I do think she’s going to be a regulation top ten, top five player in years to come. A top 15 finish.

Wow I thought this was being bold! Kasatkina exceeded my expectations by cracking the world’s top 10 in 2018.

I really like Mertens’s attitude and temperament, and she is still going under the radar for me. A top 25 finish.

Mertens was on my radar but again, I did not see her moving up the rankings so quickly. Currently ranked at 12, Mertens has some big points to defend in Australia next year.

A concern in Vikhlyantseva’s game is coming forward to the net, but those groundstrokes are lethal. A top 30 finish.

Oops. I was high on the Vik after watching her produce a serving masterclass in Moscow last year. The Russian player finished the season at 134 in the rankings after a disappointing season.

Yes… but again way off with the predicted ranking! Sabalenka cracked the world’s top 15 after a sensational second half to the season that saw her win 30 of her last 38 matches.

Just 16 but so much talent. Perhaps one year off her big breakthrough although I wouldn’t put it past Anisimova cracking the world’s top 100 in 2018.

Happy with this one. Anisimova did have a breakthrough year and sneaked into the world’s top 100 at 96.

Not a year too early! Potapova finished the year at 93 after reaching two WTA level finals.

Oh… Serena made the final of Wimby but other than that, a disastrous set of Slam champ predictions for 2018!