It’s a quick turnaround as Manic Monday is in the books and the women’s quarter-finals are up on Tuesday! The last eight will be back on court to contest the 2018 Wimbledon quarter-finals. For a recap of how things unfolded on Monday, check out my rolling live post HERE. I’ve got Tuesday afternoon to watch the matches and then that’s it for me for my Wimbleholiday!

Angelique Kerber and Daria Kasatkina will add another chapter to their fascinating rivalry on tour in their most high profile match to date. The pair played just last week in Eastbourne and are currently tied at 3-3 in their head-to-head.

Kerber saved four set points to reach the quarter-finals of Wimbledon with a 6-3 7-6(5) win over Belinda Bencic. Kerber is the only player this year to have reached at least the quarter-finals of all three Slams. This was a good match and Bencic’s growing confidence was apparent from her ultra-aggressive start. Bencic made 37 approaches to the net in this match, of which 26 were successful. The Swiss player threw in a few too many unforced errors at key moments, and couldn’t convert on her opportunities when serving for the second set. Kerber played a mostly solid match, showing intent to go down-the-line in the first set and serving the better of the pair in the deciding second set tiebreak.

Kasatkina played Alison Van Uytvanck for the second time in two weeks and the result was remarkably similar to their match in Eastbourne! Kasatkina rallied from a set down to win, 6-7(6) 6-3 6-2. Van Uytvanck played a pair of bold and successful serve and volleys to save a set point in the first set tiebreak. The Belgian player won the set on a Kasatkina double fault. Kasatkina didn’t panic and eventually wore down Van Uytvanck with bundles of variety and positivity. Van Uytvanck played a poor game up 7-6 *2-1 and ultimately never recovered as Kasatkina won 11 of the last 14 games to reach her first Wimbledon quarter-final.

Head-to-head: As alluded to above, Kerber and Kasatkina played just last week in Eastbourne. It was a bizarre but entertaining quarter-final match as Kerber won, 6-1 6-7(3) 7-6(3). I wrote about the match HERE. Kasatkina had won their previous match at Indian Wells in arguably her best performance of the entire year, allowing Kerber just two games.

Thoughts: If the match in Eastbourne is anything to go by then hold onto your nearest and dearest for this one! Kerber is the more comfortable and experienced player on grass. However, Kasatkina is clearly growing in confidence on this surface and i’ve been impressed with how positive she has been. Kasatkina has won 78% of points at the net this week and was an excellent 14 out of 16 for her match against Van Uytvanck. She hasn’t backed off from hitting her forehand.

Kerber’s serve and willingness to go down-the-line have been her greatest strengths this week. Her drop shots haven’t been quite as good (!) a tactic that didn’t work against Bencic, or against Kasatkina in Eastbourne.

I’m excited about this match and pretty close to being 50-50. Kasatkina struggled with the nerves and occasion in her first Slam quarter-final at Roland Garros last month. This will be her first match on Centre Court which does worry me! All in all, i’d probably give the edge on Slam and grass court experience to Kerber. Give it your best shot, Dasha! 🙂

Jelena Ostapenko and Dominika Cibulkova have both yet to drop a set this week at Wimbledon. Something will have to give in this sure-to-be feisty quarter-final clash.

Ostapenko recovered from a slow start to beat Aliaksandra Sasnovich, 7-6(4) 6-0. Ostapenko was 2-5 and a double break down in the opener. She also received a code violation for coaching when a linesperson alerted the umpire. Ostapenko handled the situation admirably, winning 12 of 14 points and forcing a tiebreak which she then dominated. On the whole, Ostapenko has rebounded impressively from her first round defeat at Roland Garros last month.

Cibulkova defeated the giant-slayer, Hsieh Su-Wei, 6-4 6-1. The pair traded eight consecutive breaks of serve until Cibulkova finally held serve at 4-4 in the first set. There was a very controversial moment with Hsieh serving at *4-5. A shot from Cibulkova on Hsieh’s baseline was called out, but hawkeye showed it to be in. The point was given to Cibulkova. It was clear from the replay that Hsieh put the ball back into court. Hsieh argued the point and got the referee on court who ordered for the point to be replayed. Cibulkova was furious (she didn’t really have a right to be!).

The Slovak player was rattled for the first few points before settling down to break for the set with two fabulous forehands. Hsieh did manage to eek out a hold in the second set but the result was never really in doubt. An aggressive Cibulkova won the last nine points of the match and her forehand was 🔥.

Thoughts: Ostapenko and Cibulkova have been two of the most impressive players this week and I think this *could* be an absolute stunner. The serve will be crucial for both players as they each love to batter a second serve, perhaps even a first. While difficult to compare opponents, Cibulkova’s first serve percentage (66 to 59%) and second serve points won (55 to 45%) have both been better than Ostapenko during the tournament. Ostapenko’s serve though has looked much steadier during this tournament than normal.

Ostapenko will be the favourite. I think that that Cibulkova is a real dark horse in this draw though. She’s been playing so, so well and with buzz and intensity about her game again. Cibulkova as an underdog is a very dangerous thing. I’m going for Cibulkova in three sets. 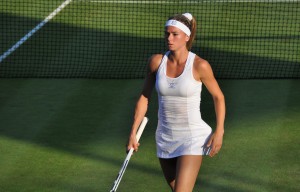 Serena Williams faces her toughest test of the tournament so far against the enigmatic and first time Slam quarter-finalist, Camila Giorgi.

Williams is into her first Slam quarter-final since giving birth to her first child in 2017. Williams is yet to drop a set and enjoyed a routine win on Manic Monday, beating fellow mother, Evgeniya Rodina, 6-2 6-2. It was a solid display from Williams who was never really pushed by Rodina. Williams’s serve has held up well, considering the chest muscle injury that she had at the French Open.

Giorgi is enjoying her best Slam run after a 6-3 6-4 win over the in-form, Ekaterina Makarova. Giorgi needed four match points serving for it at *5-4 and saved a break point. The Italian player was so aggressive in this match. It’s not often you see Makarova being the more defensive player on a tennis court! Following their general trends in the tournament, Giorgi was more willing to come forward to the net.

Head-to-head: Williams leads Giorgi, 3-0 and hasn’t dropped a set in their H2H. Their last match was a brutal first rounder at the Australian Open in 2016 where Serena had to start strong to see off Giorgi in straights, 6-4 7-5.

Thoughts: I think this could be a really tough match for Williams. Giorgi is one of the most aggressive players on tour and has always been capable of causing big upsets. The fact that they’ve played before means that Williams will know about the speed at which Giorgi plays and the power she possesses. There’s no doubt that Williams will be forced to play at a higher level than her fourth rounder against Rodina.

I think Giorgi will win a set in this match. Ultimately i’d favour Williams’s problem-solving skills, the serve and overwhelmingly superior experience at a Slam to prevail.

Julia Goerges and Kiki Bertens last played each other on the green clay of Charleston. Now they will square off on the green grass for a place in their first ever Wimbledon semi-final. Neither has enjoyed great success on the grass but belief must surely be growing for both right now…

Heading into this tournament, Goerges was 0-5 in last 16 Slam matches throughout her career. This was just the second time in six last 16 matches that Goerges went in as the higher ranked player. This time round, it all fell into place for Goerges as she beat Donna Vekic, 6-3 6-2 in 76 minutes. The nerves crept in for Goerges in the second set but she fought really hard to hold onto her serve at *3-1 (2 break points saved) and *4-2 (3 break points served) before breaking for the win.

Bertens backed up her win over Venus Williams with another top ten win on grass, holding her nerve to see off Karolina Pliskova, 6-3 7-6(1). Bertens controlled many of the rallies and played a fantastic first set. Bertens did lose her way and back off a tad in the second set but always remained in the lead with her reliable serve. The second set tiebreak was a battle of fine margins. Everything seemed to go Kiki’s way and she came through surprisingly comfortably to knock out the last remaining top ten seed in the draw.

Head-to-head: Bertens leads the H2H, 2-0 with her most recent win in the final of Charleston, 6-2 6-1. I wouldn’t read too much into the scoreline as both players had to play twice in one day.

Thoughts: I will be happy for whoever wins this match as Goerges and Bertens are two of the nicest women on tour. They’ve both had similar journies on the grass, struggling to play their best tennis on this surface. Before Wimbledon, both players had negative records on the grass – Goerges had a 15-18 W-L record and Bertens was 7-13 (via Tennis Abstract). Goerges was on a six match losing streak at Wimbledon before 2018!

Both players finally seem to be believing that they can play well on the grass. Tricky one to call as I think it could be a nervy affair with a semi-final at Wimbledon up for grabs. My instinct is that Bertens will take this.