This post previews the quartet of fourth round matches from the top half of the women’s draw. These matches will combine with those from the bottom half to all be played on Manic Monday. For previews of the bottom half, a preview of these matches can be found HERE. I’m so thankful for Middle Sunday and a break!!!

My favourite match from the entire slate of fourth rounders will see Angelique Kerber take on Belinda Bencic for a place in the quarter-finals of Wimbledon. The pair have never played before on grass, a surface that both thrive on.

After two tricky matches, Kerber produced her best display of the tournament on Saturday to defeat the number 18 seed beat Naomi Osaka, 6-2 6-4. Kerber is the only player to have reached the last 16 of all three Slams this year. Against Osaka, Kerber served exceptionally well, especially in the second set where she dropped just six points behind her serve. She was bold and aggressive, and hit plentiful winners down-the-line.

Bencic has won three matches at the same tournament for the first time in 2018. She reached the last 16 of Wimbledon for the second time in her career with a 6-1 7-6(3) victory over Carla Suárez Navarro, Bencic played a brilliant first set before encountering resistance in the second set where she twice fought back from a break down as Suárez Navarro was unable to take advantage of her opportunities to force a deciding set.

Head-to-head: Bencic leads Kerber, 3-0 in their H2H with all three wins coming in straight sets including a third round win back at the US Open in 2014. Note that Kerber did get a win over Bencic in the final of the Hopman Cup earlier this year, 6-4 6-1. It is an exhibition so does not count officially on the H2H records although the women always take this event pretty seriously.

Thoughts: Kerber was pushed hard in her first two matches, which I think helps to explain why she came out at such a high level vs. Osaka, a player she knew she’d have to be at the top of her game to beat. A fit and heathy, Bencic has exceeded expectations this week and should hopefully be able to swing away and give this one her best shot. It’s a cliché but it does feel like BB has nothing to lose in this match-up.

Definitely not a walk in the park for Kerber with the H2H as an example and Bencic looking very sharp so far. Still, Kerber has been one of the most consistent players on tour this year and will no doubt be well prepared for the challenge that Bencic presents. I’m going for Kerber in two tight sets.

Like London buses… having never played each other before on the tour, Daria Kasatkina and Alison Van Uytvanck will meet each other for the second time in two weeks and for a place in a first Wimbledon quarter-final.

Despite being the higher ranked player, Kasatkina went into her third round match against Ash Barty as the underdog. This was based on Barty’s recent form on the grass. From 1-4 and break point down, Kasatkina won 12 of the last 16 games to win, 7-5 6-3. Kasatkina overcame some serving yips at the start of the match and ultimately played a superb match. The Russian player constructed the points beautifully as she went aggressive with the forehand and handled Barty’s increasingly erratic backhand slice with ease.

Van Uytvanck backed up her second round upset win over Garbiñe Muguruza with a comfortable victory over Anett Kontaveit, 6-2 6-3. Prior to Wimbledon, Van Uytvanck had just two top 30 wins to her name. In the space of two days, she’s doubled that figure!

Head-to-head: As alluded to above, Kasatkina and Van Uytvanck played just last week in Eastbourne. It was a match that I got to watch live and one that I enjoyed very much (see match review linked below and HERE). Kasatkina rallied from a set down to win, 5-7 6-4 6-1. Van Uytvanck played some wonderful tennis for a set and a half before an increasingly positive, Kasatkina made a comeback. Van Uytvanck went away rather rapidly at the end of the match.

Thoughts: Fascinated to see how this one unfolds after their clash in Eastbourne. Both have clearly come a long way in just a week as they have each arguably produced their best matches on grass in their career at this year’s Wimbledon. I think the occasion and dealing with nerves could play a big factor for both players in this match.

For Kasatkina, she will need to stay on the baseline and throw in variety to try and get Van Uytvanck out of her rhythm. The Belgian player has been hitting the ball beautifully and there is the concern for Kasatkina that she could get blown off the court. Kasatkina has made the second week of the last two Slams and is building experience on the big stage which I think will prepare her well for this match. I’m optimistic for Dasha!

This match-up fills me with joy! After both knocked out top 16 seeds in the third round, Dominika Cibulkova and Hsieh Su-Wei advance to a fascinating fourth round meeting.

Hsieh had the biggest win of her career on Saturday as she came from 2-5 down and saved a match point to beat Simona Halep, 3-6 6-4 7-5 in an enthralling encounter. Hsieh looked to be tiring at the end but rolled through an aggressive surge as she put pressure on Halep with her unique game of angles, spins, slices and defence. It was a remarkable performance from Hsieh who has now secured top ten wins at three of her last six Slams. She was an absolute delight in her post-match press conference.

Cibulkova has yet to drop a set and has been making very swift progress through the draw. Each of her wins has been increasingly straightforward in the scoreline with victories over Alizé Cornet (7-6(3) 6-1), Johanna Konta (6-3 6-4) and Elise Mertens (6-2 6-2).

Thoughts: It’s hard to ignore Cibulkova’s form in this tournament which arguably makes her a dark horse for the title. Hsieh presents something completely different in her game style to Cibulkova’s three previous opponents and the player from Chinese Taipei seems to be floating on air right now! I do wonder how Hsieh can back up that incredible win over Halep as it was a very gruelling match. I think that Cibulkova’s intensity and willingness to go for her shots, particularly off the forehand, will see her through to the quarters. 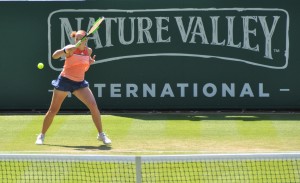 Last but not least, a rematch of last year’s first round match between Jelena Ostapenko and Aliaksandra Sasnovich is bumped up to a last 16 meeting in 2018.

Ostapenko was tested in her opener against the British wild card, Katy Dunne where she was forced to save two set points. Since then, Ostapenko has rolled through her next two matches with a pair of bludgeoning performances that saw her lose just eight games. The serve has looked pretty decent so far this tournament and she has won more than half of her second serve points in her last two victories.

Sasnovich has completely flown under the radar since her first round shock win over Petra Kvitova. Sasnovich has backed up the win with straight set victories over Taylor Townsend (6-0 6-4) and Daria Gavrilova (6-3 6-1). It’s quite the run since Sasnovich went 0-4 in sets on grass during the warm-up events this year.

Head-to-head: Ostapenko has won her two previous matches against Sasnovich in three sets including a first round win at Wimby last year, 6-0 1-6 6-3.

Thoughts: Ostapenko has looked in superb form this tournament and has rebounded impressively since her first round exit at Roland Garros. I’m still a tad wary because her game can go off very quickly and without much warning! Sasnovich is having a great week and has already shown that she has the variety and game to upset a big hitter. I think this could be a close match. Ostapenko is definitely the favourite but write off Sasnovich at your own peril!