First round action will continue on Tuesday in Charleston with the remaining 10 first round encounters to be played. Please note that there will also besecond round matches on the schedule for Tuesday but these are yet to be determined at the time of writing. For a preview of Monday’s matches, click HERE. 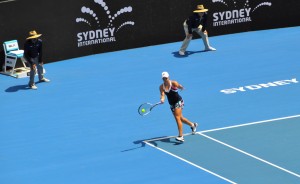 Match of the Day

The number nine seed, Ash Barty faces a potentially challenging opener against an in-form, Sofia Kenin. The 19-year-old American qualified for the main draws of both Indian Wells and Miami, beating Daria Kasatkina and forcing a third set against Petra Kvitova at the latter. Barty made the fourth round in Miami where she lost out to Elina Svitolina. An on-court coaching session showed a few signs of vulnerability as she berated her game, unable to brush off the negativity of letting slip a 5-2 first set lead. On a positive note, Barty teamed up with CoCo Vandeweghe to win the doubles title in Miami.

Barty has few data points on clay so I am intrigued to see how she fares this year. She will have just a day to prepare on the green clay before this match. A mild upset alert as Kenin has proven herself to be a really gritty competitor. I’d go for Barty and her intelligence on court to see her through to the second round.

Katerina Siniakova and Kristyna Pliskova will play each other for the seventh time with Siniakova leading the head-to-head, 4-2. This will be only their third encounter at the WTA tour level and third on clay too. Siniakova won their last meeting at the start of the year in Shenzhen, 6-2 6-2.

Both players have struggled to build on promising first weeks in Shenzhen. Siniakova reached back-to-back finals in Shenzhen, falling to Simona Halep in three sets in this year’s final. Aside from an impressive showing in St. Petersburg, Siniakova hasn’t won back-to-back matches anywhere else.  In her first match of the year, Kr. Pliskova scored the best win of her career so far by beating the world number 7 (at the time), Jelena Ostapenko. Since then, Kr. Pliskova has only scored three more wins all season with just one of those against a top 100 player. Siniakova baffles me at times but her ballstriking is as good as it comes when she’s in the zone. I’ll take Siniakova in three.

Elena Vesnina will be going for a third consecutive win over Madison Brengle with previous wins at the French Open (6-2 6-3, 2016) and Eastbourne (7-6(2) 6-4, 2-16). I like this match-up for Vesnina because she is comfortable attacking the net. In my opinion, this is an effective tactic to playing Brengle as she can be tough to break down from the baseline.

The 2010 Charleston champion, Sam Stosur takes on the 25-year-old American, Kristie Ahn. Stosur has always done well on the Charleston courts at the start of her favourite stretch of the year. Stosur’s year has been so-so with a bit of dip since qualifying for the main draw of Dubai with just one win in her last four matches. Ahn has had a decent year with four top 100 wins to her name in 2018. I would favour Stosur’s experience in this clash.

Blast from the past

The last time that Eugenie Bouchard and Sara Errani played each other on tour they were both top 20 players. Errani is back in the top 100 by virtue of her Indian Wells $125k title, while Bouchard continues to struggle having won back-to-back matches just once (!) since her run in Madrid last year. Errani lost out in an eventful match to Tereza Martincova in Miami qualifying a few weeks ago – Errani forced a decider from 4-6 3-5 down and was then unable to convert on a match point and a 5-0 lead in the third set! Martincova won that crazy match, 6-4 5-7 7-6(2). Despite that loss which must have had an impact mentally, i’d fancy Errani’s consistency and natural game for the clay to prevail in this clash. Errani in 3.