Bye bye Miami, hello Charleston! This is one of my favourite tournaments of the year and it’s one I would love to attend in the future. The 2018 Volvo Car Open has attracted a decent line-up with nine of the world’s top 20 in attendance. Main draw action will begin on Monday with 14 first round matches on the schedule. This post is a sweeping preview of the stand-out first round matches in Charleston. 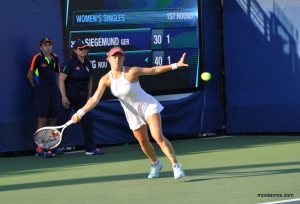 Match of the day

Laura Siegemund vs. Natalia Vikhlyantseva (1st up on Court 4 at 10am)

The most attractive first round match-up for me will see the WTA tour return of Laura Siegemund up against Natalia Vikhlyantseva. Siegemund is on the comeback after doing her knee in at Nurnberg last year. It was such a shame as with the openness of the draw, Siegemund would have gone into the French Open as a dark horse for the title. Vikhylantseva has been on my radar for a time. Consistency and confidence is a work in progress but her ball striking abilities are undeniable. Siegemund is a tricky customer on clay, even so soon in her comeback. Vikhlyantseva will need to be on the ball. I think match fitness will prevail in the end.

Bethanie Mattek-Sands hasn’t been able to resume her Team Bucie partnership with Lucie Safarova yet. The Amderican is back in singles again in Charleston after a first round loss to Alizé Cornet in Miami. First up in Charleston is an intriguing clash against Aleksandra Krunic. Since beating Muguruza by retirement in Brisbane, Krunic has won just one of seven matches on tour. This should be a fun one as both have unique games. I’m going for Krunic in three.

The last time that…

Daria Gavrilova and Ons Jabeur played each other, Gavrilova won just four games in a first round meeting in Baku in 2013. The pair will meet in the first round of Charleston where Jabeur will be seeking just a second WTA main draw win of 2018 in what has been an injury-affected season so far. I’d take Gavrilova’s scrappiness and slowly building confidence to prevail.

Naomi Osaka and Jennifer Brady played each other, Brady won 6-4 6-4 at an ITF tournament in 2014. I don’t think this will be a straightforward opener for Osaka and I guess it could be an awkward match-up for the Japanese player. Osaka in 3.

The 2014 Charleston champion, Andrea Petkovic opens up against Varvara Lepchenko. Petkovic earnt a wildcard which was later not required after a string of late withdrawals for this year’s Charleston tournament. Lepchenko won their only previous match at the French Open last year, 6-4 3-6 6-3. This feels like a 50-50 match-up. I’ll go with Petko based on her previous history and love of the tournament.

The 19-year-old, Caroline Dolehide came through two rounds of qualifying to reach the main draw where she will take on Johanna Larsson. Dolehide first came to my attention in Stanford last year where she beat Naomi Osaka and took a set off Madison Keys. She has continued to prove that result wasn’t a flash in the pan with a quarter-final in Quebec City and a third round showing in Indian Wells last month where she beat Shelby Rogers and Dominika Cibulkova and took a set off the world number one, Simona Halep. Larsson is at her best on clay. I quite fancy Dolehide’s fearlessness to score an upset based on ranking with 69 places separating the pair.