This is the first of five “Best of” posts on Moo’s Tennis Blog looking back at the 2017 season on the WTA tour. Once again we start with something cheery – handshakes and hugs! Compiling this post never ceases to put a smile on my face (see 2016 edition HERE). I love to see acts of great sportswomanship on the WTA tour and 2017 was no different. Note to the WTA producers – Stopppp panning into the crowds at the ends of matches and missing the handshake!

An all-Czech second rounder in Auckland ended with a deft drop shot and a nice hug between Lucie Safarova and Barbora Strycova.

One of my favourite post-match hugs from last year between Kristina Mladenovic and Belinda Bencic repeated in the first week of the year at the Hopman Cup in Perth.

I love this picture! Naomi Osaka and Luksika Kumkhum embraced after Osaka won their first round clash at the Australian Open, 7-5 in the decider. Naomi elaborated on their friendship in the tweet linked below.

.@Naomi_Osaka_ shows why the #AusOpen is also known as the 'Happy Slam' 🤗

She's set to play #Konta in the 2R. pic.twitter.com/KLiKB6ol64

Literally one of the first people on tour to talk to me, one of the nicest people ever. Hope to play her again soon 🤗❤️👏 https://t.co/Sx97be7QDz

After a hard fought match, Daria Gavrilova and Timea Bacsinszky shared a moment at the net. Nice to see Dasha clapping Timea off the court 👏.

As announcer says, "The Fighting Spirit of Timea Bacsinszky"
Gracious to Dasha and then signing for fan. 100% Class & Grace@TimeaOfficial pic.twitter.com/fQTkJenqPu

In the oldest ever Slam semi-final with a combined age of 69, Serena Williams and Mirjana Lucic-Baroni come together at the net.

#Serena on #LucicBaroni: “I'm really happy for her. She's an inspiration and deserves all the credit."#AusOpen pic.twitter.com/qYuumCcgXf

Doesn't get any better than this. pic.twitter.com/mfW76oM85R

Not always the best with handshakes but this was sweet from Yulia Putintseva after a brilliant final in St. Petersburg.

Two different results in Doha (see below) and Charleston, but the same reaction at the net between Monica Puig and Daria Kasatkina.

I love how Mladenovic alerts Heather Watson to the clock at the end – one of the longest matches of the year!

Always going to be tough for whoever came up short in this one. A really nice touch from Kiki Bertens, going in for hug with Bacsinszky, after a brutal match in Indian Wells.

A pre-planned handshake – Dasha squared are the best!

Emotions running high but sportswomanship of the highest order – Lara Arruabarrena and Sara Sorribes Tormo after their semi-final in Bogota.

Books a spot in @CopaWTABogota Final with 6-2, 4-6, 6-4 win over Sorribes Tormo! pic.twitter.com/a2YW8KIGvO

Very classy from Kristina Mladenovic after barely coming up short in the final of Stuttgart against Laura Siegemund.

Viktorija Golubic cramped on match point during her first round match at Roland Garros against Aliaksandra Sasnovich. Nice to see Aliaksandra go over and offer support at the end of the match.

One of my favourites from the year with racquets on the floor for the embrace! Petra deservedly got a lot of love from WTA players this year.

A rip-roaring third round battle on the court and nothing but admiration at the net between Svetlana Kuznetsova and Zhang Shuai.

The mutual respect between players has been one of our favorite parts of this year's @rolandgarros #RG17 pic.twitter.com/KZqew6jQ43

Big respect to Timea Bacsinszky and Simona Halep for their sportswomanship after their Roland Garros campaigns were ended by the lethal winner machine, Jelena Ostapenko. Bacsinszky and Ostapenko played their semi-final on their birthdays!

Lovely moment at the net between Bacsinszsky & Ostapenko after their @rolandgarros SF pic.twitter.com/jce0wTeuGh

You can hear Lucie telling Dasha at the end “great match”.

Only one live handshake shot for this year from what grew into a rather captivating semi-final in Eastbourne between Caroline Wozniacki and Heather Watson. Hoping to catch more moments for handshakes and hugs in 2018! 😉 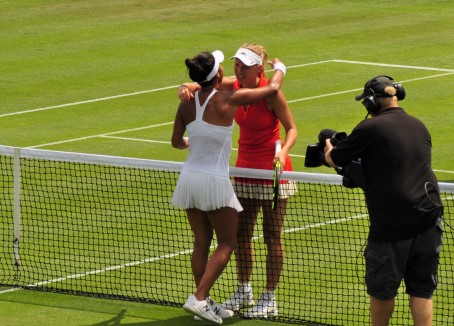 Classy and beyond. Love this extended embrace between Johanna Konta and Donna Vekic after a sensational Centre Court extra-time clash – Konta won, 7-6(4) 4-6 10-8.

After a three-hour and 10 minute battle, an emotional embrace at the net for Johanna Konta and Donna Vekic…#Wimbledon pic.twitter.com/XWhbX3J1WB

A hearty hug after a thoroughly entertaining second round match at Wimbledon. Angelique Kerber praised Kirsten Flipkens in her post-match tweet.

Tough match yesterday against a good friend & great competitor. @FlipperKF Happy to be through to the third round 😅☘ #Wimbledon 🍓 pic.twitter.com/91JMmPan1R

There’s a few players that crop up frequently – one of them is Andrea Petkovic.

Petko again after an enthralling semi-final against Julia Goerges in Washington. Even with a pat of Julia’s face 😂.

Madison Keys and CoCo Vandeweghe shared a trio of moments in Stanford (see below), Cincy and at the US Open. It was nice to see them joking and laughing after a high quality finale at the Bank of the West Classic.

First time Slam finalists at the US Open, Sloane Stephens and Madison Keys, in one of the most touching moments of the year.

What a win and what an incredibly emotional embrace ❤️️ #USOpen pic.twitter.com/ngcaC2FLs4

Kimiko Date played the final match of her career in Tokyo earlier this year. While she didn’t win a game against Aleksandra Krunic, the end was wonderful as Krunic bowed before launching into a huge hug. Krunic even had “Kimiko” on her top during the on-court ceremony. All class.

A respectful bow from @KrunicAlex for Kimiko Date as she says goodbye to her professional career. Class act. pic.twitter.com/xkTWzVBUiz

This is my new favorite handshake ever. Goodbye Kimiko😰 pic.twitter.com/Ofp5AtPy9q

Each going for their biggest title, Caroline Garcia edged past Ash Barty in the final of Wuhan. Great sportswomanship from Barty at the net despite having been so close to the win, twice serving for the title in the second set.

From the final week of regulation tournaments of the year, Julia Goerges was emotional after winning her first title in over six years. Kasatkina judged it wonderfully and went over to Goerges’s side of the net to congratulate her.

And finally, a nice pair of embraces to cap off the year with the finals in Singapore and Zhuhai.

Claims the biggest title of her career at the @WTAEliteTrophy pic.twitter.com/yHHLbWsfyU