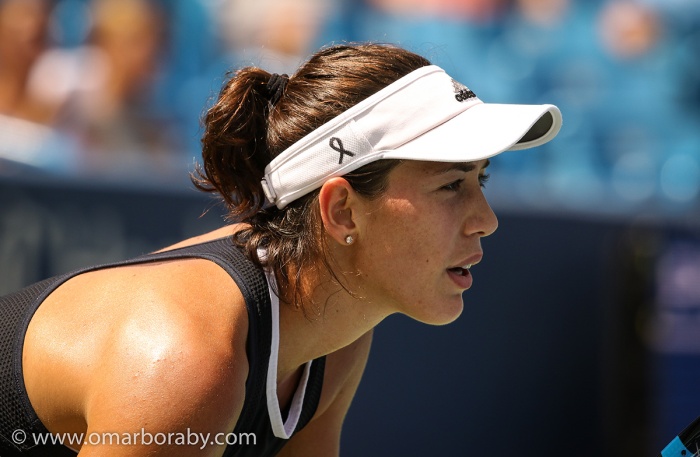 In a Wimbledon quarter-final rematch, Garbiñe Muguruza needed three sets to see off Svetlana Kuznetsova, 6-2 5-7 7-5 in two hours and 45 minutes. The last 30 minutes of this match featured some sensational high-quality tennis from both players. In the end, it was another gutsy effort from Muguruza to tough out the win deep in a third set to reach the last four in Cincy.

The one thing I remember from the Muguruza-Kuznetsova Wimbledon quarter-final was that Kuznetsova’s stats were better pretty much across the board. Muguruza was so clutch on that day and won all the big points to win in straight sets. This match was kind of a continuation with two long games defining the opening set.

After winning the latter, Muguruza dropped just one more point to comfortably win the opener. 6-2. The Spaniard was much more aggressive and willing to come forward, while Kuznetsova didn’t seem to be feeling the ball and was passive as she resorted mostly to defence.

There was an ominous feeling to this match as Muguruza quickly went up a break in the second set with Kuznetsova rather out-of-sorts. To her credit, Kuznetsova got stuck in and looked a little more stable after a pair of service holds to stay in touch. The Russian player managed to break back to level terms at 3-3. This triggered a trio of breaks with neither looking that secure on serve.

Kuznetsova scored a big hold serving at *4-4 with Muguruza missing a few returns. Finding her game, slowly but surely, Kuznetsova nailed a big return winner on set point to force a deciding set. The balance began to switch in the rallies with Kuznetsova much more decisive with her groundstrokes.

Muguruza had the trainer on between the second and third sets, which looked to be retaping of her ankle/foot. The Spaniard had retreated a little at the end of the second set and came out with intent in the decider. On one particular point, Muguruza was practically floored at the net by Kuznetsova (see photo below!), but still managed to eek out an impressive volley winner. The pair exchanged breaks early on with Kuznetsova looking a different player. She was driving through the ball with excellent racquet head speed and looking much more comfortable on serve, helped out by a higher percentage of first serves. 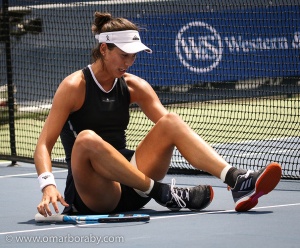 Midway through the third set Muguruza called down her coach, Sam Sumyk and was clearly rattled. The Spaniard picked up a code violation from the umpire, Mariana Alves with Sumyk overrunning after she had called time. Muguruza reacted positively though and came out with renewed aggression and focus to hold to 15. It was after this changeover that the quality of the match soared. So many of the points were being won rather than lost.

Muguruza’s service games were going by pretty quickly, while Kuznetsova was being forced to play some of her best tennis to stay ahead on serve. Kuznetsova faced a break point serving at *4-4 *30-40 – she saved it with a glorious backhand down-the-line after a pulsating rally. There were flashes of peak Sveta and on the very next point, she hit a serve-forehand combo with such confidence. Kuznetsova held.

What a way to save break point!

Kuznetsova faced more pressure serving at *5-5 and once again, played some tremendous tennis down break point. The first one she fended off with a backhand winner. The second save was even better as she displayed some incredible footwork to run around onto her forehand side and whip a winner down-the-line. However, Muguruza kept the pressure on and converted on her third break point of the game as she forced the error from Kuznetsova by getting her out wide with a decent backhand.

Muguruza served for the match at *6-5 and quickly went up *40-0 with three match points. Kuznetsova saved all three, the third on another captivating rally where she was on the offense and managed to close with a cute but equally scary volley!

On her fourth match point, Muguruza booked her place in the semi-finals of Cincy for the second consecutive year. After such a great match, it was good to see such a respectful handshake between the pair.

Winners to unforced errors ratio between sets were as follows: 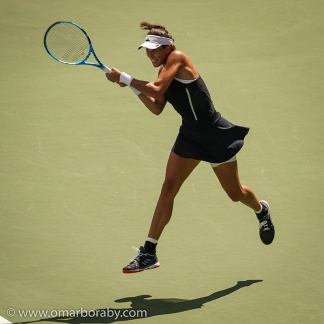 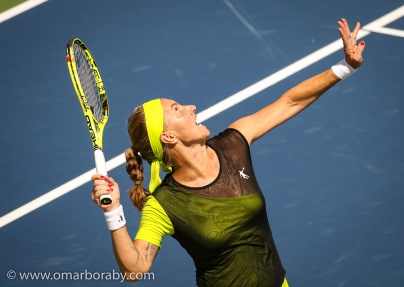 The first two sets of this match were nothing special, but the pair really put on a show at the end and played some tremendous tennis for the last 30 minutes. The difference between Kuznetsova’s level at the start and end of the match was day and night. Kuznetsova has this ability to take her hitting to another level and when she was hitting through the ball, it was special to watch.

It felt like Kuznetsova was playing the better tennis and going after her shots. However, it was yet another gutsy performance from Muguruza who served especially well (72% of first serve points won in the decider) and was also the more positive going forward. On the whole, I thought this was a pretty convincing performance from the Spaniard up at the net. To back up the win over Madison Keys on Thursday where she saved three match points to win in a third set tiebreak was a fine effort.

Muguruza has an excellent three set record in 2017, winning 16 of her 21 matches that have gone the distance. In particular, i’ve been very impressed with Muguruza’s focus and commitment in matches since Wimbledon. The Spaniard seems to have built on the mentality and confidence she showed through those two weeks in her three tournaments since, reaching the semi-finals at two of them.

Muguruza’s press conference after the match is linked below from the WTA’s Facebook page.