The third Premier Mandatory tournament of 2017 starts on Saturday at the Mutua Madrid Open with nine main draw matches on the schedule. It’s a packed draw with no byes for the top seeds and a plethora of high quality of first round matches. This will be a sweeping preview since we are underway so soon with a focus on the fabulous list of first round matches. Let’s take a look at the draw… 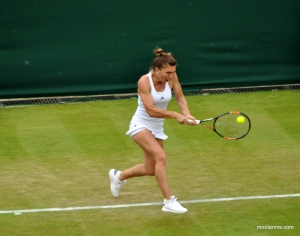 Kerber headlines the draw: The world number two, Angelique Kerber, will be seeking to end a barren run in Madrid which has seen her come unstuck in her last four matches at this tournament and go winless since 2013. Early doors, the draw has been reasonably kind. However, Kerber’s recent form suggests that she could still be vulnerable on this surface. First up is Timea Babos – Kerber has won all four previous matches although Babos did nick a set in their most recent encounter in Miami last year. This would be followed by either Katerina Siniakova or a qualifier in the second round of Madrid.

Sharapova’s quartet of intrigue: Maria Sharapova will be one of the talking points in draws for the next few months. Originally she was due to play Rabat finalist, Anastasia Pavlyuchenkova in the first round. Following Agnieszka Radwanska’s withdrawal, Pavs was moved and replaced by the number 17 seed, Mirjana Lucic-Baroni. Of particular interest is that Sharapova could play Alizé Cornet or Eugenie Bouchard in the second round, two players who have taken a strong stance against her. The Russian player though will face a stern challenge in the first round against an in-form Lucic-Baroni who should thrive on the faster clay surface.

Halep defends her title: The defending champion, Simona Halep has a fair draw in Madrid and looks in great shape following a run to the semi-finals in Stuttgart. She also won the Tiebreak Tens exhibition on Thursday night in Madrid. Halep will take on Prague finalist, Kristyna Pliskova in the first round. Fatigue on Kr. Pliskova’s side and Halep’s ability to move her opponent around the court are likely to result in an uphill struggle for the Czech player. The winner of that match will play Roberta Vinci or Daria Kasatkina in the second round.

A neat looking draw for Ka. Pliskova: It’s actually at the stage where i’m having to bring out Ka. Pliskova again (good for you, Kr. Pliskova!). The number two seed looks to have a decent draw on paper. Clay is obviously not her best surface, but the speed of the courts should aid her this week. Ka. Pliskova will play Lesia Tsurenko in the first round – the pair are tied at 2-2 in their head-to-head. The highest seeds that Pliskova could meet in the third round and quarter-finals are Barbora Strycova and Garbine Muguruza respectively, both players she has beaten already this year.

A Miami final rematch on clay? Johanna Konta and Caroline Wozniacki are on collision course for a third meeting in 2017 in the third round, assuming both win their first two matches in Madrid. This may be a stretch though with both on their least favourite surface. Furthermore, Konta has a mean looking draw with Laura Siegemund, Stuttgart champion, up first. Wozniacki will likely be more content with the draw as she takes on Monica Niculescu in the first round. The Dane has never dropped more than four games to Niculescu in 14 sets of tennis.

Johanna Konta (6) v Laura Siegemund (Saturday, 6th up on MS Court): My favourite first round match will pit Konta against one of the most dangerous unseeded players in the draw in Siegemund. These conditions are likely to be right up Siegemund’s street as the clay in Madrid plays fast due to the altitude. Konta dealt handily with a nasty draw in Melbourne but on her least favoured surface and against an opponent that will keep her guessing and make her feel uncomfortable, this match-up will definitely come with the tag of upset alert.

Maria Sharapova vs. Mirjana Lucic-Baroni (17) (Sunday): Sharapova made a superb start to her comeback in Stuttgart but i’d guess that as normal life on tour resumes, the challenges will rise as she looks to build her ranking. Lucic-Baroni will give Sharapova no time to settle and, based on how she has taken on some of the top ten players this year, will feel no fear. This could be a cracker.

Garbiñe Muguruza (5) vs. Timea Bacsinszky (Sunday): Less than two years ago, Muguruza and Bacsinszky competed in a Premier Mandatory final in Beijing… now they’re meeting in the first round! Both players are arguably at their best on the clay, but both have had injury-affected years – Muguruza has retired during three matches this year, while Bacsinszky spent time on the sidelines in January and after Miami due to a wrist injury. Muguruza will likely be more content with the draw having won all four previous encounters against Bacsinszky.

Ana Konjuh vs. Kristina Mladenovic (14) (Sunday): Since their last meeting at the Australian Open where Konjuh won in straight sets, fortunes have reversed between the pair. Konjuh has won only six matches since Dubai including a four match losing streak, while Mladenovic has won a whopping 22 matches including three finals and a title in St. Petersburg. A tough one to call but form and surface sides with Mladenovic.

Dominika Cibulkova (4) vs. Jelena Jankovic (Sunday): In all six previous encounters, Jankovic has been the higher ranked player when taking on Cibulkova. On this occasion, the rankings have flipped in drastic fashion with Jankovic currently outside the world’s top 50 and Cibulkova maintaining her place in the top five. Neither is in great shape right now – Cibulkova missed Stuttgart due to a wrist injury, while Jankovic is barely winning matches with just four main draw victories in 2017. If Cibulkova’s wrist holds up then she should have too much game for the struggling Serb.

Barbora Strycova (15) vs. Lucie Safarova (Sunday): My heart sunk when I saw this one! This all Czech match-up has proven to be tense and tight the last two times with Strycova securing three set wins in Auckland (7-5 3-6 7-6(4), 2017) and Birmingham (6-3 3-6 7-5, 2014). Strycova had a solid week in Prague, reaching the semi-finals, while Safarova was forced to pull out of her second round match at the same tournament due to illness. Too close to call for me…

Roberta Vinci vs. Daria Kasatkina (Saturday, 1st up on ASV Court): One of my favourite matches from last year was Vinci-Kasatkina from Doha where the Italian player saved three match points to win. Kasatkina’s progression (and in all honesty, Vinci’s decline during the year) saw the Russian player secure a straight sets win in Montreal. Kasatkina righted the ship in Charleston last month, winning her first WTA title and snapping a four match losing streak in the process. The fast conditions will likely not favour Kasatkina although she will be the clear favourite based on Vinci’s form in 2017.

Cici Bellis vs. Daria Gavrilova (Sunday): Swept under the carpet because of the quality of opening matches, but one to keep an eye on with interest will be a first career match-up between Rabat quarter-finalists, Bellis and Gavrilova. I’m fascinated to see whether Gavrilova’s intelligence and defence on court can negate Bellis’s fast-developing power game.

Dear #redclay….let's be nice to each other this year 😘

I wanted to get my preview post out as soon as possible since the draw starts on Saturday! Therefore, I haven’t done my picks yet and they will follow in the usual place. On first glance, i’m high on the usual clay court suspects such as Halep and Kuznetsova.

Who do you think will win Madrid? Have your say in the tournament poll below and as always, comments are appreciated!