WTA action on Tuesday at the Mutua Madrid Open will feature the remaining eight second round singles matches. This post covers two previews from the top quarter of the draw including Dominika Cibulkova v Caroline Garcia and Anastasia Pavlyuchenkova v Camila Giorgi. In a quarter that has lost all of its seeds, the four players in question all have a superb opportunity to win big ranking points as Madrid is a Premier Mandatory tournament. As always, comments are appreciated so let me know your thoughts on each match :-). 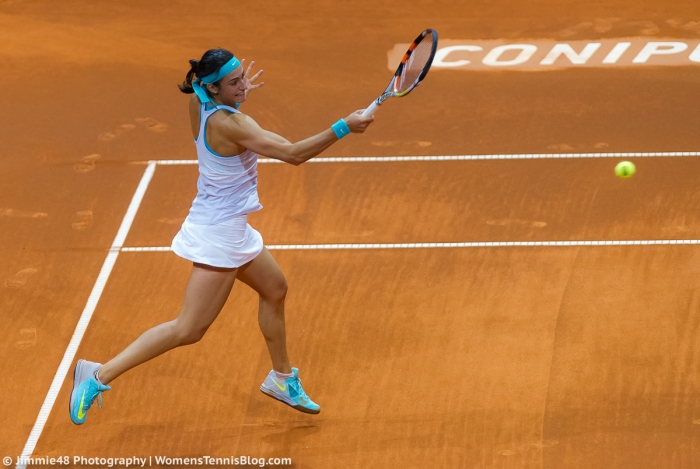 In a first career match-up, Dominika Cibulkova and Caroline Garcia will compete in Madrid for a lucrative place in the last 16 of the 2016 Mutua Madrid Open. Cibulkova had been on the cusp of a big win all year; she was two points away from defeating Garbiñe Muguruza in Miami and just one point away from the win against Agnieszka Radwanska at Indian Wells. Paired up against Radwanska in the first round of Madrid, this time Cibulkova bagged the upset win, prevailing, 6-4 6-7(3) 6-3 in two hours and 37 minutes.

It was another tortuous match for Cibulkova as she had led 6-4 5-3 and served for the match. The Slovak player has been shaky in these moments before and the memory of being unable to get across the finish line against both Radwanska and Muguruza was coming back to haunt her. Radwanska, with bucket loads of variety, fought back and edged a topsy-turvy, but rather enthralling second set.

Cibulkova though, wasn’t to be deterred and fought back in the third set, playing some solid and aggressive tennis to win six of the last seven matches. Radwanska produced some stunning flashes of brilliances but it wasn’t sustained and Cibulkova deserved the win despite the wobble in the second set.

Garcia benefited from a retirement by Johanna Konta in the first round, up 6-4 2-1, to advance to the second round. Garcia nearly wasted a 4-1 first set lead but won the last two games to claim the set. Technically, it was Garcia’s first singles win on tour since Miami having lost in the first round of both Charleston (l. to Irina-Camelia Begu, 4-6 6-2 6-7) and Stuttgart (l. to Monica Niculescu, 2-6 2-6). Garcia’s successes of late have come in doubles with Kristina Mladenovic. The pair have won titles in Charleston and Stuttgart, and developed a ten match winning streak together.

Interesting stat: Some of Garcia’s best singles performances have come in Madrid. In 2014, she qualified and then reached the quarter-finals of the main draw, defeating Angelique Kerber and Sara Errani, before losing out in a high-quality quarter-final against Agnieszka Radwanska. Last year, Garcia played lights-out tennis to defeat Karolina Pliskova in the second round and then came so, so close to upsetting Maria Sharapova in the third round, eventually losing out, 2-6 6-4 5-7.

Final thoughts: As a first-time match-up, this intrigues me! Garcia likes the clay and I feel like the conditions and surface should really suit her game. Cibulkova made a poor start to the clay court season in Prague; however, that loss doesn’t seem to be a concerning one considering how she managed to turn her fortunes around against Radwanska. I think this will be a close match with plenty of ups and down. Both can get tight in winning positions so it should be a rocky ride! Garcia’s serve could be the difference…

HELMETS AT THE READY! A huge-hitting clash is set for Tuesday when Camila Giorgi and Anastasia Pavlyuchenkova meet in the second round of the Mutua Madrid Open. Giorgi was one of six first round winners on Sunday, knocking out the number 15 seed, Sara Errani, 7-5 7-5. It was an excellent win considering Errani had served for both sets. Looking at Giorgi’s results in 2016, they are much better than I thought they were… perhaps it is because I expect so much more.

In her last three tournaments, Giorgi has reached the final of Katowice (for the third straight year), won two rounds of qualifying in Stuttgart and reached the quarter-finals in Prague. That’s not a bad slate of recent results but all ended with disappointing straight sets losses. In particular, she was taken to the wood chipper by Karolina Pliskova last week, falling 2-6 1-6 in just 50 (!) minutes.

Pavlyuchenkova’s recent form had been beyond disappointing, particularly when she had shown so much promise at the back end of 2015. I’ve always enjoyed watching Pavlyuchenkova play and racked my brain trying to work out how she hasn’t managed to achieve more in her career with such a complete set of strokes. It shows how much about tennis is mental these days. Heading into Madrid, Pavlyuchenkova was on a five match losing streak stretching back to Acapulco.

Credit to the Russian player who snapped the streak with a confident 6-2 6-1 victory over Lesia Tsurenko in the first round of Madrid. Perhaps the Ukrainian p;ayer was hampered by a leg injury which was heavily taped, but again kudos to Pavs for getting the win and without any wobbles! There was a little fall in the second set but she rebounded strongly.

Interesting stat: During Pavlyuchenkova’s recent losing run, perhaps the most disconcerting stat was that all five losses came against players ranked outside of the world’s top 50. However, she can really turn it on against the best players on tour and has 18 top ten wins to her name throughout her entire career.

Final thoughts: Surely three sets… I’d expect momentum swings and a balance of flashy winners and back-fence errors. It *could* be a great match but i’d expect some messiness too! Again, it’s a first time match-up so it is hard to really gauge how their games will match up against each other. Instinct says Pavlyuchenkova, who likes the clay and will have a little more light and shade with her shotmaking and more variety to counter Giorgi’s raw power.

Photo in this post by Jimmie48 Tennis Photography and mootennis.com