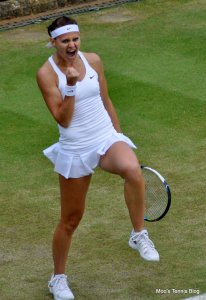 Lucie Safarova is backkkk… *high fives everyone*. Regular readers of Moo’s Tennis Blog will know i’m a big Lucie fan so this is going to be a really exciting week. Lucie’s been out of action since the WTA Finals in Singapore following complications from the bacterial infection she suffered during last year’s Asian Swing. Prior to the Australian Open, Lucie was quoted as saying that she was still struggling to get over it and there were reports she had been diagnosed with rheumatic fever.

The treatment of my bacterial infection has become complicated in recent days. My joints still hurt and so I can’t prepare the way I and my coach would like. The bio-chemical checks are not 100 per cent either

Quotes from article by Mike Patterson of Sky Sports (January 7, 2016)

Lucie Safarova, who will miss the Australian Open, has been diagnosed with rheumatic fever, according to her camp

After missing out on an entire off-season and then having to skip Australia, Lucie finally announced towards the end of January that she was back in training. On a positive note, she didn’t actually drop any ranking points in Australia but at the same time, she wasn’t able to gain.

Lucie has been practising with her coach, Rob Steckley in Doha for the past ten days. It’s so great to see Lucie and Rob back together… they are my favourite team and seem to have such a great connection. I’ve missed their videos!

Lucie is currently at number 12 in the rankings and hasn’t dropped a great deal of ranking points so far but she comes into Doha as the defending champion. It was at this stage of 2015 when Lucie went on a tear, producing a series of superb performances to win the title, beating Victoria Azarenka in the final. So what can Lucie do in Doha? Honestly, I have no expectations for this week and it will be great just to see her Lucie on the tennis court. I hope there are no further health issues and she can build up her stamina ahead of the clay court season where she will be defending her Roland Garros final points.

In Doha, Lucie will play her first match of the week against Cagla Buyukakcay… i’m so proud of myself that i’ve managed to learn how to spell Buyukakcay without checking it haha! The pair have never played before and while it’s a very winnable match on paper for Lucie, there’s just no knowing where she will be with her game. We’ll soon find out…

I’ll leave you with some tweets, videos and articles about Lucie’s return.

After a few months off #teamsafarova is bAcK to stArt the 2016 seAson 💥 let the road 2 recovery Begin@luciesafarova pic.twitter.com/zaPOPHtiZc

6 thoughts on “WTA Qatar Total Open, Doha: The return of Lucie and Rob!”