This post covers previews for two second round matches on Tuesday at the Qatar Total Open in Doha featuring the two highest ranked German players; Angelique Kerber who plays Saisai Zheng and Andrea Petkovic up against Margarita Gasparyan.

In her first WTA tour match since winning the Australian Open, Angelique Kerber will play Saisai Zheng in Doha. So much has changed for Angie in the last month and it’s still quite a shock to see her as the number one seed at such a high-profile tournament. Kerber rose to number two in the world by virtue of her magnificent run in Melbourne and is likely to stay there for sometime with few points to defend until April. Kerber has played since Melbourne, competing the week after in Fed Cup action; she went 1-1 over the weekend, comfortably defeating Timea Bacsinszky, 6-1 6-3, but failing to nag a first win over Belinda Bencic, going down, 6-7(4) 3-6. You can cut Angie some slack though who was obviously physically and mentally fatigued.

Zheng overcame Varvara Lepchenko for the second time in a week to advance to the second round of Doha; Zheng beat Lepchenko in the final round of qualifying last week, battling through a first set that lasted one hour and 28 minutes before strolling through the second to win, 7-5 6-1. Zheng backed that up in Doha, winning her first round match, 6-2 7-6(6). The scoreline hides the struggles that Zheng had to close out the match; she finally sealed the match on her tenth match point, twice failing to serve out the match at *5-4 and *6-5 and then nearly letting slip a 6-1 lead in the second set tiebreak. I still have nightmares from Zheng’s match against Lucie Safarova at the US Open in 2014 when she was moonballing on most points. She’s come a long way since then…

Kerber arrives in Doha (photo via @QatarTennis). Draw is out. She opens v Saisai or Lepchenko. Possibly Genie in R3 pic.twitter.com/2pNvFz2tas

This is Doha! 🇶🇦 pic.twitter.com/Z4iQuFzArt

Head-to-head record: This will be the first time that Kerber and Zheng have played each other on the WTA tour.

Final thoughts: I am fascinated to see how Kerber copes with the newly-found interest surrounding her. Still, she has been one of the most consistent players on the tour and i’d expect her to come through this match comfortably. More challenging tests could crop up later in the week… 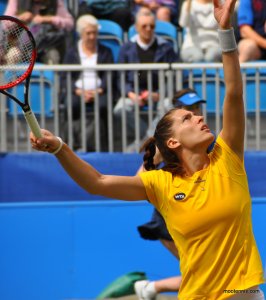 In another first career match-up, Andrea Petkovic and Margarita Gasparyan will play each other in a sure-to-be compelling second round encounter. Both eased through their opening matches on Sunday; Petkovic continued her dominance over Ekaterina Makarova, beating the Russian player for the fourth straight time, 6-3 6-2, in her most convincing win yet. Gasparyan upset the number ten seed, Karolina Pliskova, dropping just two games. While Pliskova continued to show little fight on the court, she was outplayed by a super solid, Gasparyan.

Final thoughts: This is a really tough match to call. After watching Gasparyan beat Pliskova I thought the Russian had  the edge in this encounter, but Petkovic delivered an equally assured display later in the day. Petkovic reached the quarter-finals last week in Dubai and seems to be enjoying her tennis once again after a miserable 2015 season. I think their games will match up quite evenly and the court surface suits both. I’d probably give a very minor edge to Petkovic to scrap her way through but I really think it could go either way…