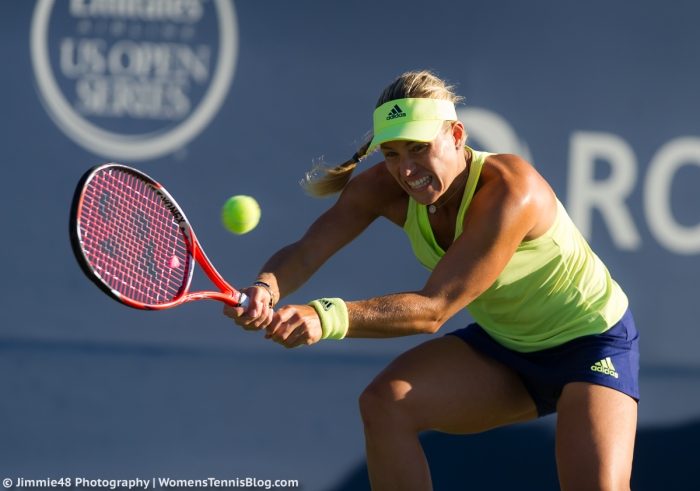 The second of the Australian Open semi-finals will produce a first time Grand Slam finalist with the number 7 seed, Angelique Kerber going up against Johanna Konta. While she was the higher seed, Kerber went into her quarter-final match against Victoria Azarenka as the underdog with a 0-6 head-to-head deficit and a recent loss in the final of Brisbane. There was a quote from Kerber before the match that her coach, Torben Beltz had a new tactic for playing Azarenka… it looks like it worked! Kerber produced a terrific performance, recovering a 2-5 second set deficit and saving five set points to prevail over the Belarusian, 6-3 7-5 in one hour and 45 minutes.

Kerber’s serve held up for the most part and she was aggressive on return, constantly putting pressure on Azarenka to produce her best tennis. When Kerber’s back was against the wall down set points in the second set, she was bold and aggressive, producing three winners on five of the set points. This clearly rattled Azarenka who double faulted away the game at *5-2 having led *40-0 at one point. While I went for Azarenka as my winner in this match, I was a little concerned that she hadn’t been pushed hard in a set, let alone to three sets… on this occasion, she came up against an in-form opponent and couldn’t find the answers.

The first item on the news on the radio this morning was Jo Konta reaching the semi-finals! Konta is the first British woman to reach a Grand Slam semi-final since Jo Durie back in 1983. It’s been a fabulous week for Konta with seeded upsets over Venus Williiams (6-4 6-2) and Ekaterina Makarova (4-6 6-4 8-6). I watched back her match with Makarova and I was so impressed with how she played, particularly in that third set. She got a little tight serving for it at *5-4 but understandably so. There was one groundstroke long that looked nervy but I thought it was more about Makarova producing the goods, including two passing winners, more than Konta doing anything badly.

It was a terrific battle with some hard fought rallies and edge-of-your-seat tension. It’s been a challenge watching matches during this first month but it was easily my favourite WTA match of the tournament. I loved Jo’s interview; the interviewer mentioned that it had taken three hours and the Brit pointed to the scoreboard and said “Three hours AND four minutes… trust me those four minutes count”. In her first Grand Slam quarter-final, she ended the dream run of Shuai Zhang with a 6-4 6-1 victory.

#Kerber has beaten #Azarenka for 1st time in her career to advance to SF #ausopen Watch more https://t.co/Ek545ZyE1J https://t.co/LvMcLVIHpe

Making Britain proud: @JoKonta91 is through to the semis in Melbourne pic.twitter.com/dLIbu940MG

Head-to-head record: Kerber and Konta will be playing each other for the first time.

Interesting stat: Kerber will crack the top five in Monday’s rankings and could go even higher if she reaches the final or wins the title. I think by the time Indian Wells and Miami comes around, Kerber will be number two in the world. For Konta, she will rise to a new career high ranking inside the world’s top 30.

Analysis: I’m really, really, really looking forward to this match and am setting my alarm early for tomorrow. I think Konta has a real chance in this one. Kerber is the clear favourite and while she tried to dismiss this in her press conference, I think she will feel that pressure with such a huge opportunity to reach a first Grand Slam final. Furthermore, for Kerber, there is a concern she could have a letdown after such a magnificent win over Azarenka. It happened to an extent when she beat Maria Sharapova at Wimbledon in 2014 and lost the next day to Eugenie Bouchard although that was probably more down to tiredness. I think Konta starts this in a decent position but obviously the pressure will transfer if she gets into a winning position. While I think she has held it together well mentally this fortnight, she’s more of an unknown quantity in how she deals with the occasion as Kerber is the much more experienced.

I love these situations with both players trying to break new ground and while I think Konta is playing well enough to at least trouble Kerber, I think the German player will ultimately prevail…