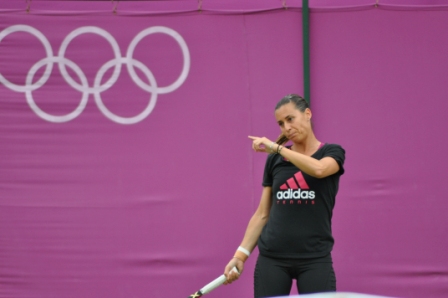 Just wow. This is the second day in a row that tennis has rendered me a speechless and sputtering wreck.  Flavia Pennetta won the 2015 US Open, her first Grand Slam singles title, with a 7-6(4) 6-2 victory over Roberta Vinci. In her victory speech, Pennetta also dropped a bombshell as she announced her retirement of tennis. In an interview with Eurosport afterwards she appeared to confirm this would come into effect at the end of the year.

Going out on the highest of highs like pic.twitter.com/su331iq3yu

While it’s a sad one for Flavia fans and tennis fans in general, I think it’s a rather delightful decision. Go out on a high, I say! There had been some rumours about Pennetta retiring and I saw it mentioned on my Twitter timeline today and was nodding along… still, it’s a shocker! Initially I thought it was retirement with immediate effect but it seems that Pennetta will continue for the rest of the year… Singapore is now a real possibility for Flavia.

Back to the final…. both were nervous during the first set but on the whole, it was a decent final considering neither had experienced this occasion before. Pennetta went up a break in the first set, finally converting on her seventh break point in the fifth game of the match. She lost her break and then had to serve with scoreboard pressure at *4-5 and *5-6, sealing both games in surprisingly convincing fashion with super shots at the net. Vinci’s game at the net wasn’t there to start with as she won just 4 out of 11 points up there and she couldn’t get her forehand going.

Into a first set tiebreak, which seemed about fair, and it was Pennetta who was the more solid. Vinci made quite a few errors including a forehand lifted long and a return way long to set up set points for Pennetta… she duly obliged. Winning the first set seemed to free up Pennetta who started to go for her shots and hit more aggressively, going up *4-0. The quality was excellent at the start of the second set with some wonderful points up at the net. Vinci mounted a mini-comeback but Pennetta would not be denied, winning with looming grey clouds… they finished JUST in time!

This tournament has been a wacky and wild rollerocaster but I mean that in a positive way! There have been some stunning women’s matches this fortnight, a few that will definitely be contending my top 20 countdown at the end of the year, and while this tournament didn’t end the way that many, including myself, anticipated and hoped it would, I kind of loved everything about that final.

this is just awesome pic.twitter.com/Ib9kUMXllo

I’m so thankful (for selfish reasons) that this match finished in two sets because I feel terrible right now… you know that feeling where you’re shivering cold but also burning up. This tournament has destroyed me! Time for sleep…

Many, many, MANY congrats, Flavia and Roberta.

14 thoughts on “Wowzers… Pennetta wins the US Open and will retire from tennis at the end of 2015!”