The first round of Cincy begins on Monday and there is plenty to look forward to over the next week. As always, I will be endeavouring to cover all the WTA action. Please note I will be posting my predictions each day HERE so you can follow my progress… last week was hilariously bad but hey ho, that’s the fun of it for me! Here are previews of some of the best first rounders to be played over the next two days with Keys-Bacsinszky one of the night matches in Cincy on Monday…

The quality of the Cincy draw is quite nicely summed up with one of the toughest first round matches at any tournament this year between Angelique Kerber and Belinda Bencic. Bencic has carried her great form from the grass court season onto the hard courts; after a second round loss in DC, Bencic went all the way in Toronto, taking out six top 25 players. Bencic’s route through the draw included Eugenie Bouchard, Caroline Wozniacki, Sabine Lisicki, Ana Ivanovic, Serena Williams and Simona Halep. I think you’ll be hard pushed to find a better draw path for a champion than that. The Swiss player is now at a new career high ranking of 12 (!) and is zoning in on the world’s top ten. She does have big points to defend though at the US Open next month where she reached the quarter-finals last year.

Kerber turned her season around in Charleston where she won her first of four Premier titles. Her results at the Slams this year have been disappointing although two tight three set losses to Garbiñe Muguruza is hardly a disgrace. Kerber comes into Cincy with four days of rest following a taxing two weeks where she won Stanford and then reached the third round of Toronto.

Kerber and Bencic last met at Flushing Meadows with Bencic delivering a display well beyond her years and showing far superior mental toughness to prevail, 6-1 7-5. Kerber started the year at one of her lowest ebbs but after her excellent run in finals, she looks arguably more confident than she has done in years. This is a tough first round match and it will depend on the freshness of both players – Kerber’s legs were gone in Toronto but she will have had at least four days rest compared to Bencic who will have a very quick turnaround, both physically and mentally. With more time to adjust, i’m going for Angie. 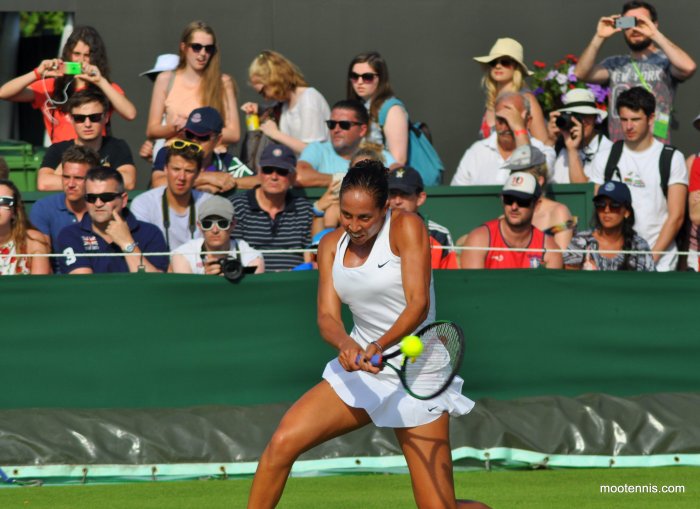 I like this match-up and it was the one that I stared at lovingly for a while when I first saw the draw. Madison Keys and Timea Bacsinszky played their first match against each other at the French Open earlier this year where Bacsinszky’s bag of tricks saw her prevail in straight sets, 6-4 6-2. Both players will be looking for matches ahead of the US Open; Keys won a round in Stanford but was forced to pull out of Toronto with a wrist injury, while Bacsinszky lost her first match in Toronto, an absolute epic against Alison Riske that lasted over three hours. Bacsinszky had two match points in the second set but ended up losing in three. This will be an important match for her to get over the disappointment of that loss. This one will also depend a lot on Keys and whether she can control her groundstrokes. Bacsinszky had the edge on clay but I think this will be much closer. I’m leaning towards Timea and her ability to mix it up, to help her prevail over three sets,

Carla Suárez Navarro will be seeking to snap a five match losing streak next week in Cincy when she takes on Sloane Stephens… this is another horrible draw (no-one has an easy draw though) for Carla who lost to Alizé Cornet in Toronto last week. Cornet twice failed to served out the match in the second set before collapsing in the tiebreak. Rain halted the third set until the next day which gave Cornet the chance to settle again with Suárez Navarro unable to capitalise on her momentum. Stephens also lost her first match in Toronto but can be forgiven for being fatigued after finally winning her first title in Washington the week before with wins over Magda Linette, Louisa Chirico, Sam Stosur and Anastasia Pavlyuchenkova all in straight sets.

Stephens has had a really consistent year and since Indian Wells, has won at least three matches at six tournaments. Stephens is back into the world’s top 30 and can keep improving on that for the remainder of the year where she is defending few points. In their only previous match, Stephens defeated Suárez Navarro, 6-1 7-5 on the grass courts of Eastbourne. While that was on Carla’s weakest surface, their respective form has continued to stretch further in opposite directions since that match. If Stephens can find the form she showed in DC, looking to hit her shots with authority, then it’s hard to see Suárez Navarro turning her recent woes around.

Well this should be interesting… two players who are about as erratic as they come, Caroline Garcia and Sabine Lisicki, will meet in the first round for the chance to meet… Petra Kvitova! Garcia is on a four match losing streak and hasn’t recovered from a gutting loss to Heather Watson at Wimbledon where she had match points. I saw an article on Twitter timeline (posted by @josemorgado) which implied that Caroline’s dad regretted implementing such an aggressive game style for her (see HERE but not in English). It certainly isn’t working right now. Against Jelena Jankovic in Toronto she was solid for a time, particularly on serve, but when it really mattered, the errors and indecision came flooding back.

Lisicki was also struggling after an earlier-than-usual exit at Wimbledon where she was outplayed by Timea Bacsinszky in the third round. She then lost in the first round of Stanford to Kimiko Date-Krumm from a convincing lead, 1-6 7-6(4) 6-2. However, Lisicki did well in Toronto, beating Venus Williams and Barbora Strycova in straight sets before losing out to eventual champion, Belinda Bencic in a wonderful WTA scoreline, 6-1 1-6 7-6(3). Lisicki had a match point but shouldn’t be too disheartened. There was an overhead in the net in the third set tiebreak but it wasn’t easy. I was actually quite impressed with Lisicki who looked surprisingly secure from the baseline in the third set. The last few games were of a very high quality.

Lisicki beat Garcia earlier this year in Indian Wells, 6-4 6-4 en route to the semi-finals. Garcia needs a big result somewhere to get her out of her current tail spin. I’m favouring Lisicki in this match-up though…

*Note – I had incorrectly put Garcia over Lisicki here*

12 thoughts on “WTA Cincinnati 2015: A sweep of first round previews”