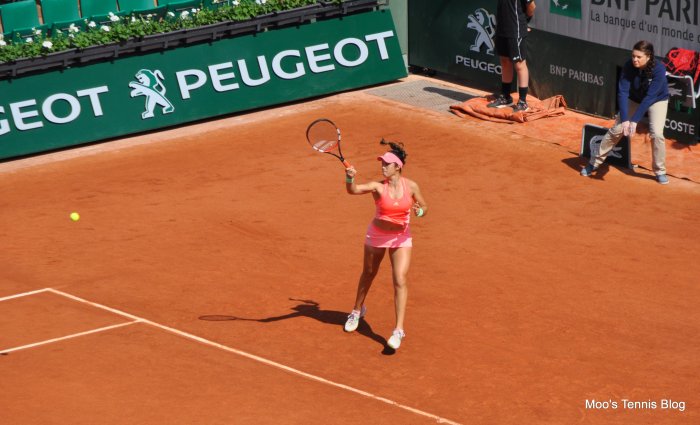 The first result from the 2015 Citi Open yielded a surprising outcome as the 19-year-old, Louisa Chirico scored her first ever WTA main draw with a comprehensive 6-3 6-0 victory over Heather Watson. The Brit’s last match had been on Centre Court at Wimbledon against Serena Williams where she came within two points of the win. Watson was not at the races as Chirico, aside from one poor service game, was dominant throughout their 69 minute contest. I’ve only seen the American play twice before but both times i’ve been impressed. In particular, her serve is decent and the backhand looks magical at times. There were a couple in the first set that were world class when she managed to time it to perfection The forehand looks like it can break down but Watson failed to exert enough pressure on it as she contributed to her own downfall with a hefty number of unforced errors, many off the forehand side.

In an unstreamed match (whyyyyy) Alizé Cornet defeated the qualifier, An-Sophie Mestach, 6-3 6-3 in one hour and 22 minutes. A big thumbs up though to DC as WTA matches are never normally streamed and there were FOUR on the first day of main draw action. Unsurprisingly, Cornet and Chirico have never played each other before. This could be a tricky match for Cornet if you look at her results this year. She has won multiple matches at just four tournaments this year and Chirico should get some decent support. The American player was impressive against Watson but it will be intriguing to see how she will get on against Cornet, who is unlikely to make as many errors as Watson did. I’d fancy Chirico to win a set but Cornet’s experience to see her through in the end.

There was a collective sigh among WTA tennis fans when CoCo Vandeweghe lost her first round match in Washington, preventing what what would have been a hilarious second rounder against Yulia Putintseva. CoCo lost in three sets to Christina McHale, 6-2 4-6 6-4. It was a solid showing from McHale who has looked much improved in the last couple of months. I felt this result was more about CoCo though; the higher ranked player committed a lot of errors and more significantly, struggled on serve getting just 38% of first serves in play.

Putintseva also had to come through a three setter in what sounded like from people on the grounds (it was unstreamed!) a dramatic match. Putintseva defeated Kurumi Nara, 4-6 6-4 7-6(4). Poots has had some good results of late and beating Nara was a solid result, particularly after losing the first set. In their only previous match, Putintseva beat McHale, 6-1 6-7 6-2 at the Australian Open in 2013. While Putintseva brings all the hilarity with her on-court behaviour, she has a really tidy game. Poots has buckets of variety and she really maximises what she has. I quite like Poots to sneak out the win in this one with a touch more invention helping her cause. She’ll need to keep her cool though against a pretty solid opponent…