Four days down and we are left with the top 32 in each draw. There were upsets in the women’s draw on day 4, but nothing that really shook the boat. The big result came in the men’s draw with the final match of the day. I’m focusing mainly on the women but how could I ignore that match..

What a terrific match! Nadal-Brown totally lived up to my expectation although despite Rafa’s shakiness on grass in previous years, I wasn’t expecting Dustin to prevail in a best of five. Brown played his instinctive game, serving well, volleying well and constantly rushing Rafa. Dustin played at such a quick pace. He was superb, particularly in the first and third sets, but Rafa played a poor game to lose his serve at the start of the fourth set. As Dustin stepped up to serve for the match, he opened with a double fault. I was screaming “slow downnnn” at the TV! He won the next four points though to claim the biggest win of his career in his first outing on Centre Court. Dustin looked a bit shellshocked in his post-match interview and was really starting to ramble! This opens up Nadal’s eighth providing BIG opportunities for Dustin, Viktor Troicki, James Ward and Vasek Pospisil to reach the quarters.

A glance at those remarkable numbers… #Wimbledon pic.twitter.com/XfcHnwfdMO

Magdalena Rybarikova scored her second main draw win at Wimbledon with a superb performance to knock out the number eight seed, Ekaterina Makarova in an entertaining and high quality court 2 battle, 6-3 7-5. Rybarikova had previously gone 0-7 at Wimbledon but finally bagged her first win at SW19 on Tuesday after Karin Knapp retired down a set and a break. There was no doubt about this win though. Rybarikova played a fantastic match as she unsettled a normally consistent Makarova with her variety of drop shots, volleys and slices. Rybarikova exposed Makarova at the net on several occasions and was good value for the set.

The second set was much closer as Makarova was much more precise and raised her intensity. Makarova led 5-3 in the second set but made a right horlicks of serving out the set and lost four straight games in a muddle of unforced errors. Rybarikova made no mistakes, serving the match out to love. It felt like Rybarikova had got the monkey off her back with a first win in Wimby and she looked completely free to play *her* game. Rybarikova hit 26 winners to just 5 unforced errors, which are magnificent stats. Makarova did well to get into a winning position in the second set but did lose the plot in the last few games. She finished with more unforced errors than winners which is very rare on the Wimby stats which are normally very kind.

When she puts everything together like this, Rybarikova is gorgeous to watch. She has a great opportunity to keep progressing in this Wimbledon draw as she plays Olga Govortsova in the third round.

Petra and Angie keep on winning

Petra Kvitova and Angelique Kerber continued to look the most impressive players in the bottom half as they both won in straight sets on Thursday. Once again, Petra needed less than an hour to beat Kurumi Nara, 6-2 6-0. It wasn’t peak Wimby Petra but it was still pretty damn good. Petra hit 10 aces and dropped just nine points on her serve. She is yet to face a break point at the 2015 Wimbledon Championships. Kvitova’s groundstrokes went off at times but it was her serve that really pulled her through with such ease.

Kerber was tested by Anastasia Pavlyuchenkova but came through with flying colours in a 7-5 6-2 win. Pavs played a really competitive first set. She played the right way, serving well, going for her shots, but also mixing it up with drop shots to try and disrupt Kerber’s rhythm. Kerber was still in control and twice went up a break. However, she played two shocking games to back up the breaks. It was third time lucky for Kerber though as she served out the match after breaking Pavs at 5-5. Kerber got the early break at the start of the second set and took control as Pavs fell away. Kerber posted impressive stats once again with 24 winners to 6 unforced errors, and dropped just 7 points on her second serve. It’s good to see her winning these matches quickly, which should help her later on in the tournament.

Both players face seeds in the third round; Kvitova takes on Jelena Jankovic, while Kerber plays Garbine Muguruza for the second consecutive time. Both matches will be previewed on Moo’s Tennis Blog on Friday. 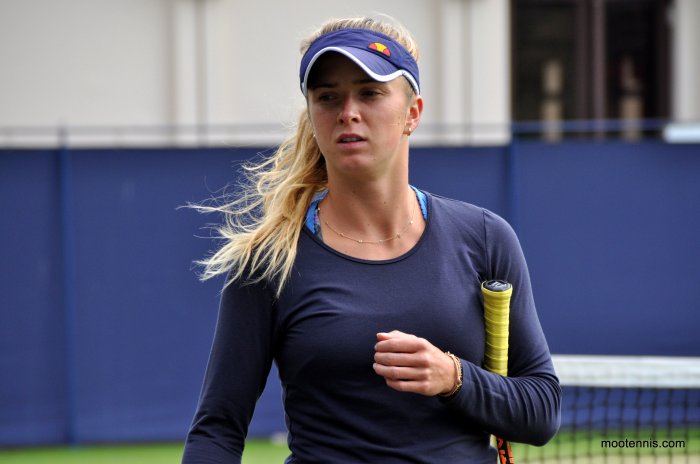 Makarova was the highest profile casualty, but three other seeds fell on day 4. Roland Garros quarter-finalist, Elina Svitolina lost in straight sets to Casey Dellacqua, 7-6(3) 6-3. I’m annoyed I didn’t go for this because I was really impressed with Casey at Eastbourne. I watched the first set tiebreak and Dellacqua was rewarded for her positive and aggressive play against a characteristically passive Svitolina. It doesn’t seem like grass suits Elina’s game. Svetlana Kuznetsova looked to be on her way to a third round match against Monica Niculescu (which would have been beautiful) after winning the first set of her second round match agaisnt Kristyna Pliskova but Sveta is Sveta. In the end, Karolina’s twin sister prevailed and served out the match in style. She gave a nice post-match interview where she said she didn’t want to play Court No.1 after the match got moved at the last minute. The other seed to fall was Alize Cornet who lost in three sets to Olga Govortsova, 7-6(6) 2-6 6-1

Maria edges Duan in a cracking match, plays Keys next

A quick shout out to the second round match between Ying-Ying Duan and Tatjana Maria which was arguably the best women’s match of the day.  Exhibiting completely different game styles, the pair put on a great show. Duan did a great job at dealing with Maria’s defence and endless slices, and there were so many extended rallies. In a 78 minute final set which featured 11 straight holds of serve, it was Maria who finally converted on her third match point. Maria will play Madison Keys in the third round in what should be another fun match. Keys failed to serve out her match against Elizaveta Kulichkova at *5-4 in the second set, but prevailed in the tiebreak. Keys converted just 3 out of 15 break points and like her match against Stefanie Voegele, had a nervy ending. Keys is the only seed remaining in Makarova’s eighth of the draw and has a huge opportunity to make the quarters. She’s still not playing great, but is slowly improving and look’s to have time on her side. Maria won’t be an easy match though.

Maria def. Duan 1-6, 6-2, 10-8. Credit to Duan for hanging in there for so long; not easy with Maria's ruthless defense and insane slices.

If you want to catch on previous round-ups of action at Wimbledon check out the links below: