I forgot how crazy the first two days of a Grand Slam are. This was the first time in ages I got to watch a Slam opening day from start to finish. It was fun but trying to keep up with everything is impossible! I enjoyed the challenge though. There were big upsets in the women’s draw, but also some impressive performances. Here’s my round-up of women’s action from day 2 at the 2015 Wimbledon Championships.

Eugenie Bouchard‘s loss to Ying-Ying Duan may not have been a big surprise based on her recent form, but I was not expecting Simona Halep to fall at the first hurdle. Step forward, Jana Cepelova. The Slovak player had won just one WTA main draw match all year before coming into Wimbledon but she played her best match of the year by a country mile to defeat the world number three, 5-7 6-4 6-3. Halep, troubled perhaps by a foot/toe injury, was a shadow of the player who had started the year with a 24-2 W-L record.

Halep took a lengthy medical time-out at *6-5 in the first set. She served poorly and committed a ton of unforced errors, dumping many into the bottom of the net. It was a strange performance and she didn’t look up for the third set. Halep now has time to refocus ahead of the North American swing. It’s been a season of two halves for the Romanian player and it’s fair to say that since Miami, this has been a slump.

Many saw Bouchard’s loss coming but I was still a little surprised after watching her play a solid match against Alison Riske in Eastbourne. Duan has a big game, but has never shown signs before of putting it all together on the big stage. It was later revealed that Genie was advised not to play due to an abdominal injury. It was a pretty painful watch and I was stunned that Duan served it out!

Genie says she was advised not to play here after being diagnosed with a Grade 2 abdominal tear after Eastbourne. #Wimbledon 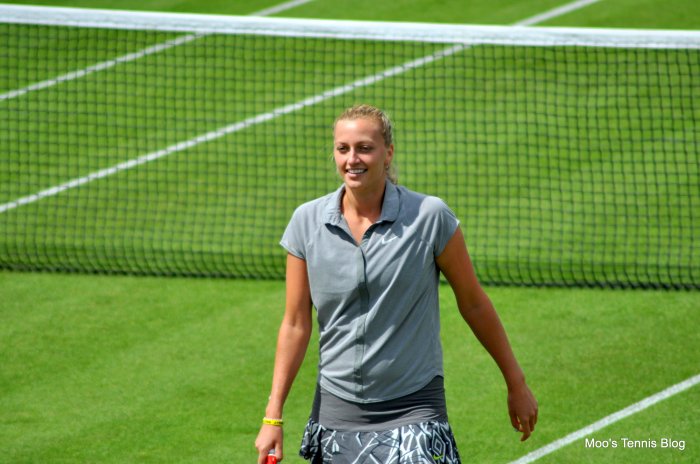 Petra Kvitova looked nervous going out onto Centre Court for the first time this year as defending champion. I was nervous too, but Petra delivered a supreme display, beating Kiki Bertens, 6-1 6-0 in just 35 (!) minutes. Petra didn’t drop a point on her serve in the first set. In fact, she didn’t drop a point until the final game when she double faulted. Cue hilarity on Twitter…

Petra was superb on serve and after a few missed groundstrokes in the first set, she really settled into a nice groove in the second set. She finished the match with 9 winners to 3 unforced errors and was 10/10 on net approaches. Lindsay Davenport on the BBC commentary made a great point that Kvitova (and also Venus Williams) do not hesitate on short balls on grass and know instinctively to close and finish at the net, making them very effective on this surface.

There was some question marks surrounding Petra after she pulled out of Eastbourne but this was a solid first round performance. It will obviously get much more difficult as Bertens didn’t play her best, seemingly overrawed by a first appearance on Centre Court. Kvitova will play Kurumi Nara in the second round.

Bye, Bertens. 28-1 on serve. Who's next? #Awesome pic.twitter.com/DkViptKfOc

Before the match, BBC played a feature with Petra at her house where she is staying during Wimbledon. BBC are going all in on Petra this year which I love. In their interview, they had Petra playing swingball which was all kinds of awesome. Naturally, the WTA Reactions Twitter (who are doing a FANTASTIC job just two days into Wimby) went to town with this.

When you see the booty pic.twitter.com/SmescIdYkd

Trying to watch three matches at once like pic.twitter.com/Oge7lcOK2i

When someone returns your lefty serve out wide pic.twitter.com/KgqUQaTvSP

Angelique Kerber went one game better than Petra with a 6-0 6-0 thrashing of Carina Witthoeft in the first match up on court 18. It was a superb performance from Angie who scored the third double bagel win of the women’s first round after Venus Williams and Andrea Petkovic both didn’t drop a game on Monday. I’ve had high hopes for Angie during this grass court season and she picked up right where she left off from winning the title in Birmingham. Kerber finished with stats of 21 winners to just 5 unforced errors as she forced Witthoeft into playing an extra ball on so many occasions. Witthoeft didn’t play a bad match but as the match wore on, she began to overpress and this obviously played into Kerber’s hands. This could be a really great tournament for Angie. I just hope when she comes up against top opposition, she doesn’t retreat…

Kerber was all over Witthöft's 2nd serve like a lawnmower, winning 90% of the points. 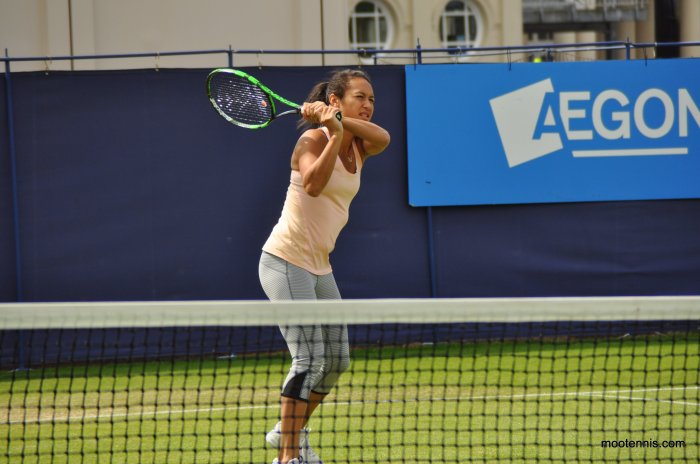 Heather Watson and Laura Robson were both on at the same time of the day and had mixed fortunes. Laura lost, 6-4 6-4 against Evgeniya Rodina but showed great improvement from her first match in Eastbourne. I will keep reiterating this but it is SO good just to see Laura back on the tennis court. Results aren’t crucial right now. Robson hit 22 more winners than her opponent, but she finished with 45 unforced errors. The serve also leaked points with Robson winning just 28% of second serve points. There was a potentially controversial moment at the end of her match but Rodina managed to serve it out in the end.

OMG! The umpire overruled a passing shot that would have won Rodina the match. Rodina has NO challenges remaining.

Heather saved three match points to knock out the number 29 seed, Caroline Garcia in an extra-time finish, 1-6 6-3 8-6. Watson saved match points on her serve at *4-5 after tamely going down *15-40. Garcia couldn’t convert though and then got broken to love, serving a double fault. Watson failed to serve it out at the first time of asking, but got the job done at the second chance with Garcia an error-strewn mess. It’s sad to see Garcia play like this after such a solid start to the year. She’s really regressed as the year has wore on, particularly mentally. Sam Smith made a good point (referring to what Lindsay Davenport had said) about all big hitters needing a Plan B+ game. Garcia doesn’t have that and just hits the absolute cover off the ball. In the critical moments particularly with Garcia not looking secure, she needs some insurance on her shots.

Watson progresses to a second round match against Daniela Hantuchova, which should be another nailbiter…

Best match of the day?

I really enjoyed the first rounder between Jelena Jankovic and Elena Vesnina with Jankovic winning, 10-8 in the third set. It was a tight finish with the momentum swinging rapidly between both sides. Vesnina was serving at *5-6 *0-30 and came back to hold, winning a crazy point at the net. In the next game, Jankovic initially fended off Vesnina with a gorgeous pass down *15-40 on serve but Vesnina broke and then had an opportunity to serve out. It didn’t go well… Jankovic had lost three of her last four matches at Wimbledon but she broke back and then held for a big win. Both players finished with positive stats; Jankovic hit 41 winners to 27 unforced errors, while Vesnina hit 54 winners to 35 unforced errors. It’s worth noting that the stats people at Wimbledon are very kind. 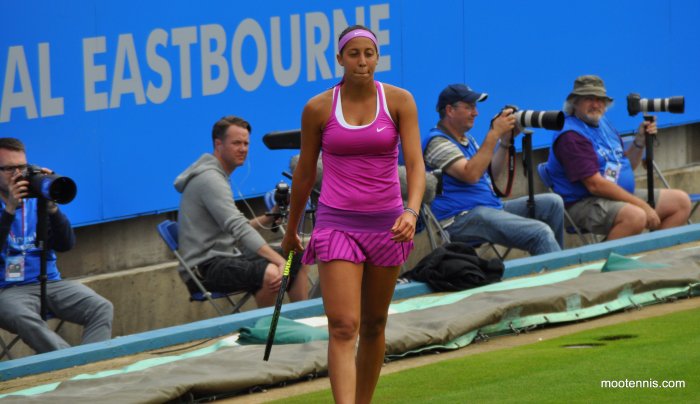 Madison Keys was staring down a first round defeat as she was a set and a break down to Stefanie Voegele. Keys was up 5-2 in the first set tiebreak but really lost her way. You just didn’t know whether a winner or error was coming next. While Voegele was playing well, there was a sense that Keys could turn it around IF she could keep the ball in court for longer than two shots. Keys knucked down and played a great couple of games to win the second set. At 2-2 in the third set, the Australian Open semi-finalist is still in a precarious situation with the match to resume on court 3 tomorrow.

I’ve been playing catch-up today as I wanted to get some of my photos out (and it was my birthday!) but it should be normal service resumed now so expect more previews and another round-up with the talking points from day 3 of Wimbledon 2015 tomorrow.

17 thoughts on “Wimbledon 2015, Day 2 Round-up: Bouchard and Halep out, Kvitova in superb form”