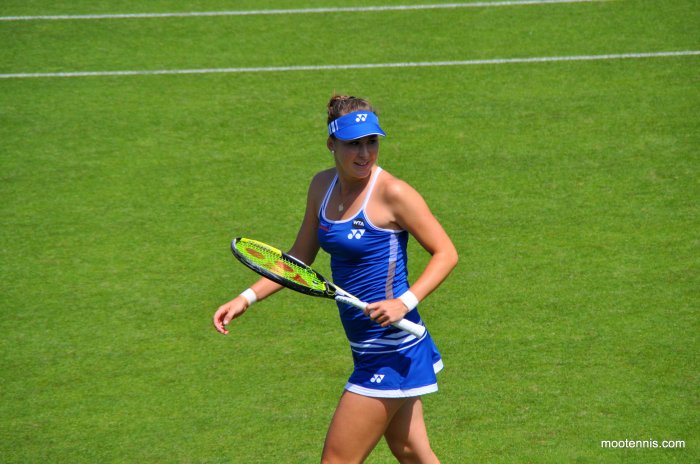 It’s like London buses… Belinda Bencic and Madison Keys had never met before on the WTA tour before the French Open but the pair will now play each other for the second time in a month. In their first ever match-up, Keys comprehensively defeated Bencic in the second round of the French Open, 6-0 6-3. Keys skipped Birmingham due to illness and will play her first grass court match as the defending Eastbourne champion. Keys hasn’t looked great in practice, but that isn’t the be all and end all. Bencic played her first match on Sunday and defeated Mona Barthel, 6-3 7-6(6), coming from 5-2 down in the second set and saving a set point. Barthel was the better player for much of the second set, but Bencic was mentally stronger and did well to pull through in straight sets (see full match recap here).

Bencic is playing better than in Paris and with much more confidence. I think Belinda will get a set but it will be tough for her against Keys, who has a much better serve and could rip on the second serve, which was vulnerable against Barthel. If Keys is error-strewn, much like she was in her very first outing on grass last year in Birmingham, Bencic may have chances to grab a win…

This match-up fascinates me… Eugenie Bouchard continues her search for wins of any kind as she takes on Alison Riske in second round action in Eastbourne. Riske played her first match on Sunday and defeated Alize Cornet, 6-0 6-3. I was expecting three crazy sets full of dramatic Alize… It never happened obviously. Bouchard hs lost 10 of her last 11 matches on the tour. It’s not the losses that have made the impact, but more the nature of them. In ‘s-Hertogenbosch, Bouchard was 4-0 up in the third set against Yaroslava Shvedova and lost 6-4. In Birmingham, she was dropped a third set bagel by Kristina Mladenovic. Bouchard has played some solid tennis in bursts but when it really matters and things get tight, she has played poorly and made some bad decisions. It’s obvious confidence is rock bottom right now.

Bouchard leads the head-to-head with Riske, 3-1 and has won their last three matches including a 6-2 6-3 win in Wuhan last year. Perhaps i’ve gone cuckoo but I feel like Genie could win this one. It will turn around for her at some part and it’s just wondering when. I like Alison so i’ll be happy if she wins this…