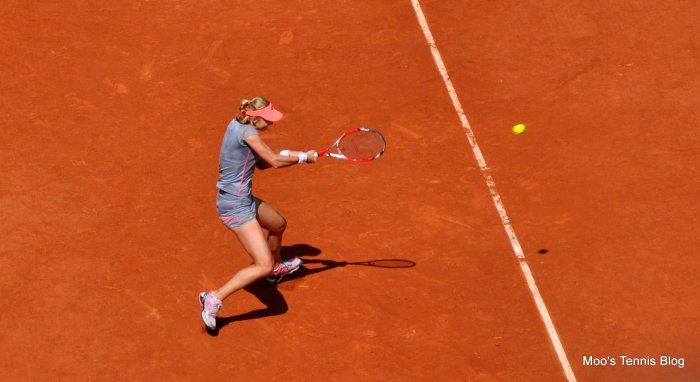 The last time that Ekaterina Makarova and Ana Ivanovic played each other, I was a student. I remember getting up early to watch the end of this match before a lecture. It was at the Australian Open where Makarova caused a sizeable upset to defeat Ivanovic in a beautifully crazy match, 3-6 6-4 10-8. It’s surprising that Ivanovic and Makarova have played so little which makes this fourth round clash all the more exciting. Ivanovic’s recent record at Grand Slams has been somewhat of a horror show. Since a quarter-final appearance at the Australian Open last year, Ivanovic’s record reads R3, R3, R2 and R1. At one stage, it looked like she would suffer the same fate at Roland Garros as she lost the first set of her first round match to Yaroslava Shvedova. It may not have been pretty but it’s about getting through the matches with the W.

Ivanovic overcame Shvedova, 4-6 6-2 6-0 and then fought past a really game effort from Misaki Doi to win, 3-6 6-3 6-4 in the second round. Ivanovic lost the plot at the end of the first set. She stuck in there though and eventually got across the finish line. Tennis is such a fascinating sport and confidence is huge. After two tight matches, Ivanovic played her best match of the tournament to beat Donna Vekic in the third round, 6-0 6-3. It was another win on Suzanne Lenglen. I remember last year there was a stat that Ivanovic’s record on this court was dreadful.

Makarova has dropped one set in her first three matches. Her second round victory against Teliana Pereira, 6-2 5-7 6-3 was an impressive result, Pereira was chasing everything down and is a real handful on clay. Makarova showed signs of crumbling, but she played well in the final set and didn’t buckle even though Pereira kept holding to stay in the match. In the third round, Makarova beat her doubles partner, Elena Vesnina for the sixth time in a row (and in straight sets again), 6-2 6-4.

So… who’s winning this? I ain’t got a scooby haha! Makarova continues to be underrated in my eyes although her form over the past three months has been disappointing. Equally, Ivanovic has not played well this year and I think some of that comes down to the injuries she has suffered. Add to that, changes to her coaching team and it’s been an unsettling year all round. Ivanovic came into this tournament without many talking about her and I think that is how she would have liked it. However, now she’s the top seed in her section of the draw and there’s an opening to reach the semi-finals! My instinct says Ivanovic is going to eek out the win.

We could have had a fourth round match between Alize Cornet and Yulia Putintseva… i’ll just let that sink in for a minute.

Instead we get Cornet against Elina Svitolina, which is still an exciting prospect. This has been a career best week for Svitolina who is into the second week of a Grand Slam for the first time in her career. Her draw has opened up like a dream BUT she’s taken advantage of it. After defeating Yanina Wickmayer in straight sets in the first round, Svitolina has toughed out two three setters. The first of those against Putintseva was an absorbing match. In the third round, Svitolina beat Annika Beck, 6-3 2-6 6-4.

Cornet has also broken new ground at this tournament as she reached the fourth round of Roland Garros for the first time in his career. Her reaction was characteristically dramatic but this was a huge moment for her. Again, the GIFs from this match were legendary. If you’re not following @WTAReactions, you are doing Twitter wrong! It’s an absolutely genius account. Cornet came from a set down to defeat Simona Halep‘s conqueror, Mirjana Lucic-Baroni in three tight sets, 4-6 6-3 7-5.

When you're at a surprise party and you have to hide because the guest of honour is about to arrive any minute pic.twitter.com/taY6nzUgyQ

Cornet leads the head-to-head with Svitolina, 2-0 with two straight set wins in 2013. Cornet won in Bogota, 6-2 7-6(6) and Moscow (7-5 6-3). It’s another match that I could see going either way. Cornet though will have the crowd and also, I believe the momentum. It’s a MASSIVE match as both are playing for a first ever Grand Slam quarter-final. I’m expecting fireworks…