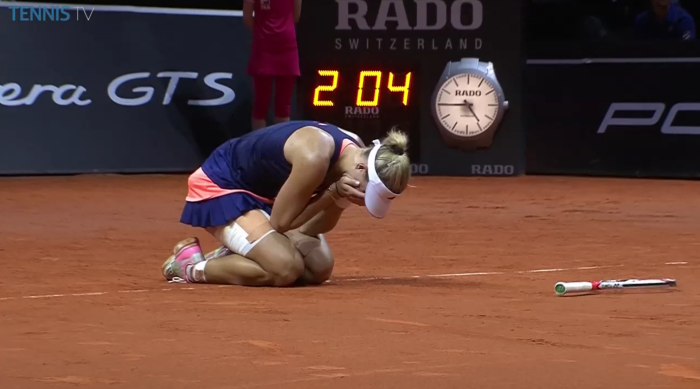 Have I mentioned that I love Stuttgart? I’m sorry for sounding like a broken record all week, but this tournament is just totally awesome.  Angelique Kerber extended her winning streak to 11 matches, winning the last four games of the match to beat Caroline Wozniacki in a gripping finale, 3-6 6-1 7-5.  Kerber was 5-3 down in the final set and two points from defeat, but her spirit and fight shone through as her boldness on the big points helped her to claim the biggest title of her career.

I expected this match to be a really brutal one and although the third set did live up to those expectations, the first two went by surprisingly quickly in less than an hour.  Set one was peak Caro and set two was peak Angie.  Wozniacki was GOING for her backhand in the first set and was dominating the majority of the rallies.  As Caroline stepped up to play the second set, she was given a warning for coaching which naturally, incensed Piotr or Viktor Wozniacki as he is now known.  There was something quite amusing about Papa Wozniacki rowing with WTA supervisors while Poker Face played in the background.

Kerber knuckled down and got a solid service hold to love to start the second set, which gave her a platform to build on.  She broke Wozniacki in the second game and then consolidated it in style with back-to-back aces.  The second set flew by as Kerber sealed it, 6-1.

The third set was tense, tight and fascinating.  The rallies lengthened as both players seem to get a little weary, particularly Kerber.  Wozniacki earnt the first break of the third set but gave it away with a sloppy patch of play.  Kerber started to be more proactive in rallies having become a little defensive at the start of the third set.  Now back on serve, Wozniacki held easily at 4-3 and then broke again with Kerber’s resistance starting to flag.  Wozniacki stepped up to serve for the match…

If the last few weeks have taught us anything it is to never write off Angelique Kerber.  Wozniacki was two points away but a couple of backhand errors helped Kerber break back.  I’m already struggling to remember what happened in those last few games and they were a bit of a blur.  I remember Kerber bringing out the drop shot at 30-30 in one of the final games and a stunning backhand in the 5-5 game I think.  It was her bravery on the big points that helped her prevail as Wozniacki was a little passive at the end.  The last game was a struggle with three match points passing by.  On the fourth, Kerber sank to her knees in delight.

The unpredictability of tennis continues to amaze me.  If you’d told me last month that Angie would go on an 11-match winning streak, winning Charleston and Stuttgart back-to-back I would have laughed.  She has completely turned her year around and has, dare I say it, put herself forward as a contender at least for Roland Garros.  It will be interesting to see how she does in Madrid and Rome but confidence will be SKY HIGH.  Wozniacki had a great week and has already bested her clay court season from 2014.  She can catch up so many ranking points with solid performances over the next month.  This was her most encouraging week of the year despite failing to serve out the match.

Finals like these and tournaments like these, are why I love the WTA.  We’ve been spoilt over the last few weeks.  The women are in Prague and Marrakech next week with Madrid starting in a week.  This is my favourite stage of the season… bring it on!

7 thoughts on “That’s a wrap for Stuttgart 2015: Kerber beats Wozniacki in gripping finale and gets the Porsche!”