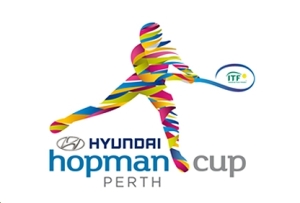 The first week of the season is always a brilliant bonanza of tennis made the more special by the unique offering of the Hopman Cup.  Billed as an International mixed team tennis event, it has attracted excellent crowds to the new-for-2013, 12,000+ seated Perth Arena.  The Hopman Cup, which begins on Saturday the 28th of December 2013, comprises of eight teams with one male and one female player from the same country.  The eight teams are split into two groups, which play each other in the round robin format.  Each tie consists of one mens singles, one female singles and one mixed doubles match.  The winners of each group will play the final on Saturday the 4th of January, 2014.

The Hopman Cup always attracts a solid and varied line-up of players with the likes of Roger Federer, Novak Djokovic, Serena Williams and Andy Murray all previous competitors at this event.  2014 hasn’t drawn the huge names, but it is an attractive line-up through all eight teams.  This includes the now dating, Radek Stepanek and Petra Kvitova (Czech Republic), stars of the future, Milos Raonic and Eugenie Bouchard (Canada) and home hopes, Bernard Tomic and Sam Stosur (Australia).  It is such a shame that the pairing of Agnieszka Radwanska and Jerzy Janowicz is no more after Janowicz pulled out with a foot injury.  He has now been replaced by the world number 287, Grzegorz Panfil. The remaining pairs are John Isner and Sloane Stephens (USA), Tommy Robredo and Anabel Medina Garrigues (Spain), Jo-Wilfried Tsonga and Alize Cornet (France), and Andreas Seppi and Flavia Pennetta (Italy).

The Hopman Cup is essentially an exhibition tournament, but it’s one the players genuinely seem to want to win.  It is a great warm-up event with each player guaranteed at least three singles and three doubles matches.  After two months away from competitive action, getting matches under the belt is crucial before the first Grand Slam of the year.  Here are a collection of my favourite moments from the last couple of years at the Hopman Cup.

The 2013 installment of the Hopman Cup saw a fantastic tie between Serbia and Australia where Bernard Tomic beat Novak Djokovic (!!) and a fantastic mixed doubles match.  In the second video below, the Australian pair saved a match point in the second set tiebreak in one of the best points from the entire year.

Andy Murray and Laura Robson’s growing partnership in 2010 was a real crowd pleaser and helped to put Laura on the map.  They played some wonderful mixed doubles matches and progressed all the way to the final where rather curiously, Robson beat Maria Jose Martinez Sanchez (which was her first win over a top 30 player) and Murray lost to Tommy Robredo.  They lost the mixed doubles, but it was a great spectacle and teed up Murray and Robson’s participation at the Olympics in 2012 where the pair won the silver medal.

Mixed doubles is what makes the Hopman Cup so special.  It is only played at the Grand Slams and I personally enjoy watching it and the different dynamics you get to see on the tennis court.  This was a particularly funny moment from the 2012 event when Caroline Wozniacki managed to ace Mardy Fish.  The clip is made by Fish’s reaction.

Nicolas Mahut is certainly a character.  In the 2011 edition of the Hopman Cup, he played a Wimbledon rematch with John Isner, but the most memorable (and downright disturbing) moment was when he decided to dress up in one of his partner, Kristina Mladenovic’s dress.

Although every team wants to win, the Hopman Cup is normally played in great spirits.  However this moment was certainly an exception when Mardy Fish and Grigor Dimitrov had to be separated  during a mixed doubles match between Bulgaria and USA in 2012.  Fish seemed to get a bee in his bonnet about something after taking a 6-2 6-1 pounding in the singles match to Dimitrov.  Their issues escalated in the doubles when Fish deliberately tried to hit Dimitrov and the pair exchanged words at the changeover.  Fish was also given a code violation in the singles match for spitting at a section of Bulgarian fans.  Not one of Mardy’s finest moments…

Via The Daily Forehand

There have been some great partnerships over time and the Serbian pair of Novak Djokovic and Ana Ivanovic was certainly one of the best.  Djokovic’s joker side came out this year when he managed to get a reluctant, Ana Ivanovic to dance on court and also imitated her during some of their matches.

The Hopman Cup will be aired on Seven Network in Australia.  There are normally good streams and in past years, there have been highlights on Sky Sports in the UK.  If you have never watched the Hopman Cup before, I would definitely recommend catching some of the action in 2014!