I was very lucky to get tickets for No.1 Court on Tuesday and had the best time. It was so nice to be back at Wimbledon. It was the best seats we’ve ever had! Read on for my diary from Wimbledon which includes highlights of first round matches, getting tickets, Wimby in COVID times and more new pictures

. For a full album of photos from my day at Wimbledon, check out the MTB Facebook page here.

Once we got into the grounds, we found Samantha Jane and Shelbs on Court 16 so stuck around for the second set. When we arrived, Stosur was having an absolute mare, shanking lots of balls. Stosur rattled the towel holder with her racquet. There was a lot of head shaking from Rennae Stubbs who was watching on from the sidelines.

Stosur soon settled down and started to play much better. Stosur saved three match points at *4-5 and then went onto win the second set. The crowd were really behind Sammy. Rogers went onto win the match in three sets.

To be honest I was slightly baffled with the choice of Kerber-Stojanovic for No.1 Court. I know obviously Angie is a Wimby champ but they haven’t given that same treatment to other champions and I didn’t think Kerber-Stojanovic, on paper at least, really stood out from the slate of first round matches. In the end, I really enjoyed the match!

Stojanovic made a very bright start to the match, quickly going up 3-0. Stojanovic lost that early break with three double faults in one game and then dropped her level significantly. Kerber cut out an early flash of errors and was just rock solid, going up a set and a break. Angie will always be one of my favourite players to photograph! It was so much fun to track her with her trademark grass court shots where she gets down so lowwww.

The first set wasn’t great. Second set was much, much better. It was punctuated by the background noise of the rain on the roof. It was so loud and must have been distracting for the players! The end of the match was the best bit as Stojanovic battled hard to try and force Kerber to serve out the match. Stojanovic saved three match points and the crowd really got behind her. There was a lovely moment where Stojanovic broke out into a grin and gestured that she was feeling goosebumps from the noise!

Kerber did eventually break and seal the win in straights. There was another lovely moment at the end. Both players walked off court together, as has always been the Wimbledon tradition. I don’t think Kerber realised though that they are doing post-match interviews on court this year. As she paused, Stojanovic decided to stick around, sit down on the grass and watch Kerber’s interview. I loved that Stojanovic stayed to soak in the moment for a bit longer. This all unfolded a few metres in front of us. Surreal! We were on TV for the post-match interview 👀. 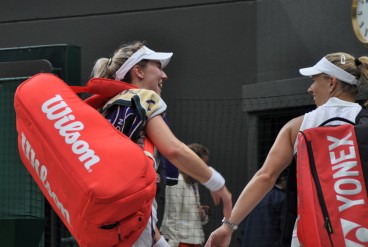 So I must point out that i’m not fully up with my men’s tennis but… this was a great match right? Medvedev was fantastic for the first two sets. My bro and I had already pencilled him in as the Wimby champ 😂. Serving brilliantly, winning all the big points and in cruise control.

Medvedev started to hit a few errors on his backhand in the third set. Rather out of nowhere, Struff broke Medvedev’s serve to love. It was great to see Struff come forward to the net so much and the serve & volley finally began to pay off. It was during the third set that England vs. Germany was going on and I spotted multiple people actually watching the match on their phones. Perhaps just my opinion but if you’re going to be in the court, it’s a bit disrespectful to the players 😂. There were a few eruptions of noise when we scored. I spotted this family randomly celebrating and it took me a few seconds to realise what was going on! Poor old Struff… he smirked at one point so I think he realised what had happened. 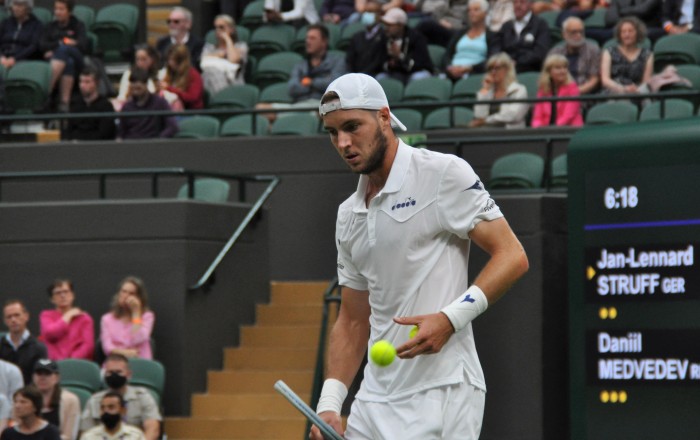 Struff deservedly won the third set. There was little to separate the pair in the fourth set. I thought Medvedev lost some of his early sharpness and looked a little tired as Struff was all guns blazing. Both were returning so well. Struff was absolutely hammering Medvedev’s second serve. Both had their chances to break, Medvedev early on in the set and then Struff towards the end of it. The fourth set was decided on the tiebreak and Medvedev’s serve was untouchable as he served his way into the second round. 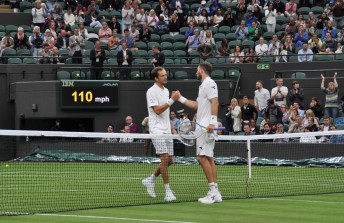 High quality match, the best of the day for us. Feeling comfortable with Medvedev as my final pick in TDC. Also wondering how Struff isn’t ranked higher? He’s a quality player. I really enjoyed watching Medvedev and he has very expressive strokes. Another fun one to photograph.

We got an extra treat of Kyrgios-Humbert being moved to No.1 Court. I had been following the scores and was hoping we might get Pegula-Garcia, but Medvedev-Struff going four quashed those chances. We stuck around for the first set before having to dash for our train. It was fascinating to watch Kyrgios and I was just willing him onto our side each time because he’s so damn watchable! 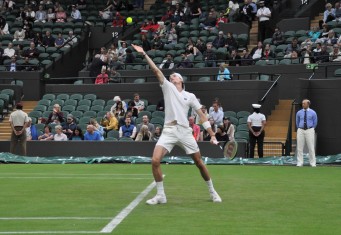 A few highlights. Kyrgios seemed to really respect Humbert and he was applauding and racquet clapping Humbert after practically every point won. It got almost a bit weird! Kyrgios tried an underarm serve in the first few points which was dreadful. He laughed. I wish we could have stayed for longer. We enjoyed some of the match on the TV when we got home.

These were the best seats we’ve EVER had at Wimbledon in all our years of going. The seats we were in are normally for people in the queue so I really savoured this once-in-a-lifetime opportunity. I’m never doing the queue 😂. We were in gangway 26 and row B. Our seats were near the end of the aisle so we didn’t have to get up too many times to let people in.

Buying tickets: There were two routes to tickets this year – via Wimbledon and having a MyWimbledon account, or via the LTA official release. I knew the LTA tickets would be a disaster (😂) so I prioritised the Wimbledon route. We went in with a plan of what to go for. No.1 Court on Tuesday. We thought the big demand would be for Centre and wanted guaranteed tennis with a roof. The weather has been dreadful this year so you just can’t rely on it. In the end, it was a wise choice. We thought the second day would be better so they could iron out any teething problems from the first day as everything’s so different this year.

Before the 1pm sale, you were supposed to receive a code via e-mail from Wimbledon. I received mine but my bro never got his (it arrived at 1:15, helpful) so it was all down to me! I went straight for No.1 on Tuesday, was about 1,000 in the queue, had a slight wobble when I had to create a Ticketmaster account but boom, all confirmed. Very lucky!

COVID Protocols: There were strict COVID protocols to enter the venue as Wimbledon is part of the Government’s Events Research Programme. You had to be either fully vaccinated or demonstrate confirmation of a negative lateral flow COVID test in the past 48 hours. We had to do the latter and sign up for the NHS app (not the NHS COVID app) and verify our identity. Once you register your result, it shows on the app with your COVID pass. They were asking to look at COVID certification before tickets were checked (although not with ID as stated) and then you receive a COVID certification band to wear.

Entry to the venue: There were much longer queues to get in the grounds, as expected. The queue started at the intersection between Church Road and St Mary’s Road, right at the top of the hill! A long queue but to be fair it did keep moving and wasn’t stationary that much. We were told to arrive at 11:45am via e-mail. We got a train into Wimby at 11am, arrived at the queue at about 11:15am and ended up going into the grounds at the exact time they asked us to! Tickets are all via the Wimbledon app this year. Thankfully we had no problems with using the Wimbledon app (i’d read on Twitter some had had problems) and our QR codes showed up at 7am in the morning.

Access around the grounds: It’s such a thrill just to walk around the grounds. We spent most of our time on No.1 Court but in our strolls outside, it did feel noticeably quieter. We managed to stand and watch Stosur-Rogers on Court 16 which would never have been possible in a normal year. In the courts at the southern end of the grounds, they have restricted a few of the walkways. You could walk between courts 5/6 and 9/10. It was reasonably busy and they had stickers out for no standing, not that anyone paid much notice. For Li-Podoroska, it was easy to find a place to stand and not be in the way.

The rules stated you had to wear your mask around the grounds and you were allowed to take them off once seated in stadiums. There were a lot of people not wearing masks around the grounds. We got a Pimms, it had to be done! £8.50 is daylight robbery but it’s a tradition 😂. They are now using reuseable cups which was a nice memento. I realised that I think you’re supposed to return the cups… oops, oh well!

My quest to watch Karolina Muchova live continues for another year. Pleased to tick off a few more players on my list and get a few photos! 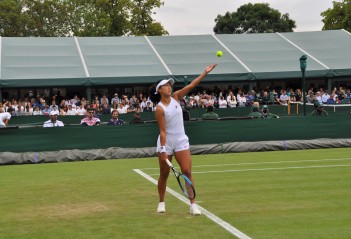 Snaps of the day 📸

My favourite pictures of the day were Angie. 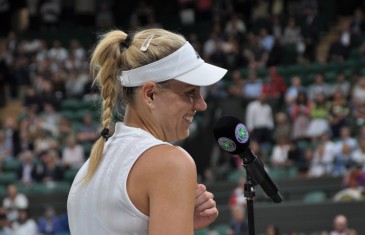 What a day. On a Wimby high. Such a treat to be at Wimbledon again and feel the atmosphere. I got goosebumps with the crowd noise. You pick up so many things in person that you just don’t get on the TV. When I came away on Tuesday night, I wanted to go again! But now, i’m not sure I have the energy 😂. So grateful to have had the opportunity to go. One day is perfect and it leaves me wanting more and already looking forward to next year…