Muguruza beat Sabalenka in three sets for the second time in as many weeks. The ballstriking was next level. I enjoyed this match more than their Doha encounter which rather fizzled out in the third set. The intensity never wavered in this clash, perhaps even growing as the match wore on. Who needs a crowd.

The match unfolded differently than in Doha as Sabalenka made the much better start. Much like her last match against Kontaveit, Sabalenka was serving huge and landing crushing blows on the first ball off the return. Muguruza missed a few groundstrokes long but it was more about Sabalenka playing well. The match turned early in the second set when Muguruza got a few looks at the Sabalenka second serve and increasingly began to attack. Muguruza’s presence on return in the final set was frankly terrifying and I think it was the key factor in the result.

I think I jumped the gun with my comment about being convinced by Sabalenka yesterday! I’m still high on Aryna but there is developing scar tissue with some of these tight three set losses. Sabalenka has now lost her last four three set matches. I went against Mugsy for the past two matches which is rare for me! These were huge statement wins over Swiatek and Sabalenka. Muguruza is now the clear favourite to win the Dubai title and I really hope she does it. A title is the glaring omission from her resurgence over the past year.

This was an extraordinary match. Playing with a lead is hard, as Mertens and Pegula both demonstrated! In the first set, Mertens led 4-2, had a break point for 5-2 and failed to serve out the set at *5-4. Pegula took the initiative late on with increasingly aggressive tactics including serve and volleying! Pegula won the set, 7-5.

In the second set, Pegula carried the momentum from the first set into the second set and led 5-2. Pegula failed to serve out the match at *5-3 and then missed three match points in the next game. Mertens showed plenty of resilience and made the match increasingly physical. Mertens mixed in some loopy balls down match point which Pegula clearly didn’t enjoy. Like Pegula at the end of the first set, Mertens became increasingly aggressive. Mertens is not the best of closers (see exhibit – set 1) but made amends with a terrific close from 15-30 to force a decider.

In the third set, Mertens carried the momentum from the second set into the third set. This time it held. Pegula was mentally and physically spent, not moving her feet and hitting bundles of errors. A super gritty performance from Mertens when it looked like she had blown her chances in the first set. Mertens has won 34 (!) matches since the return of tennis post-pandemic. It’s a crusher of a loss for Pegula but I hope and tend to think it won’t linger. Worth noting Pegula has played a lot of tennis these past few weeks and it certainly showed in that third set.

It ain't over until it's over ➡️ Semi final @DDFTennis pic.twitter.com/iAgVlSen19

In their third encounter this year already, Teichmann scored a first win over Gauff. This was just a super steady performance from Teichmann who held serve in all nine service games. Gauff’s level, as it has been for much of the tournament, was up-and-down and she squandered her rare chances on return in the second set.

Teichmann’s rise to relevance on the hard courts has been a pleasant surprise. She’s proven this year that her finals run in Lexington last year was no flash in the pan. Post-Australian Open, Teichmann has reached quarter-finals of the Phillip Island Trophy, semi-finals of Adelaide and now semi-finals in Dubai, her best ever singles result at a tournament of this calibre.

Teichmann takes it!@jilteichmann gets revenge and reaches her first WTA 1000 semifinal with a straight-sets win over Gauff.#DDFTennis pic.twitter.com/FaCMaPopBa

This was one of those matches that was difficult to call on paper with few data points. However, one player took the reins early on and absolutely cruised it. Krejicikova comfortably advanced to her first WTA 1000 level semi-final. Potapova was rather out-of-sorts as she hit a total of 28 unforced errors and seven double faults. Potapova took a ball to the eye in doubles on Wednesday and was forced to retire so I do wonder whether that had an impact on her performance. For Krejcikova, it was a cool and calm display, and she looked in control of her game and emotions. A very classy final service game.

That feeling when you’re through into your first WTA 1000 semi-final. @BKrejcikova moves on at @DDFTennis pic.twitter.com/RoVSN4i81q

Down 15-30 when trying to serve out the second set, this was a bold point from Mertens.

Three match points saved and we go to a decider!

Another hot shot this week from Mertens!

Comes up with the pass to break Pegula and serve for the first set.#DDFTennis pic.twitter.com/aDMqklr0En

The caption killed me. Have I missed something – why is Conchita not just watching the match on TV?!

Keeping a close eye on the action from afar 👀 pic.twitter.com/ScGCB17ooM

A blast from the past. I just remember that I watched Muguruza and Mertens’s only previous match live at the US Open in 2016. I’m going for a Muguruza-Teichmann final. 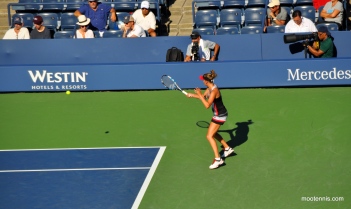