Unfortunately it was a sad end to the 2019 Rogers Cup with just four games played in the final as Serena Williams was forced to retire. It was still a great week of tennis in Canada and has got me out of my post-Wimby slump! Attention quickly turns to Cincinnati with main draw action starting on Monday. I’m delighted to be teaming up again with photographer, Omar Boraby, and will have some photos to share on the blog later in the week. First round previews and polls for Cincy will go up on the separate page here. Read on for the final post from Toronto… 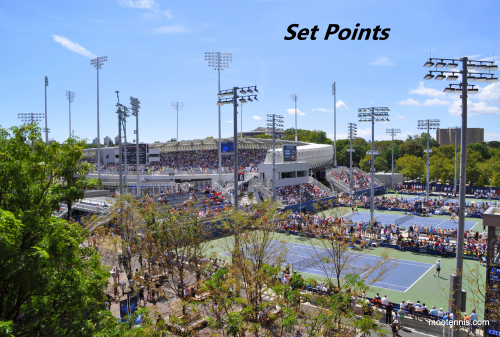 After just four games and with Andreescu leading 3-1, Serena retired due to a back injury. It was a really bizarre moment as I can’t say I had noticed anything untoward with Williams. Andreescu had bagged the early break at 1-1 via a double fault from Serena and then consolidated the break. Serena then walked to her chair and sat down. Andreescu went over to hug Serena and the pair shared some lovely words.

Obviously not the way that Andreescu would have wanted to win it but what an incredible week. The Canadian player has won two of the biggest hard court titles this year! After what happened with the Indian Wells-Miami double, I hope she rests up and doesn’t play Cincy. All in all, a good week for Serena. The more matches, the better, but still that elusive title since giving birth evades Serena.

Over 🔟 hours on court this week
Three Top 🔟 wins
In the end, it’s a Perfect 🔟 for Bianca Andreescu.

It's been 50 years since Canada's Faye Urban lifted the Rogers Cup trophy and was the last Canadian to do so.

Very nice from Bianca to go over and give Serena a hug.

Such a lovely moment between @serenawilliams and @Bandreescu_ despite the circumstances 😍#RC19 pic.twitter.com/RwPL1VD9Ux

Here’s the full exchange between Serena and Bianca via Sportsnet on Twitter. You can hear Bianca say to Serena that she is a f***ing beast 😂.

Not the ending we all expected, but what a moment for these two. ❤️🎾🏆

Serena’s final press conference is linked below from the Tennis Canada YouTube page. Serena said her whole back spasmed and she couldn’t sleep last night. She said that it normally takes up to 2 days to heal so hasn’t ruled out Cincy. Serena also spoke very highly of Andreescu.