Welcome to the 2019 Wimbledon Championships. This is my favourite time of the year and we are officially underway with day 1 of Wimbledon in the books! The bottom half of the women’s draw was played on Monday and blimey was it a dramatic day There were shocks across both the women’s and men’s draws. Read on for a bumper round-up in Monday’s Set Points post including highlights from the day. 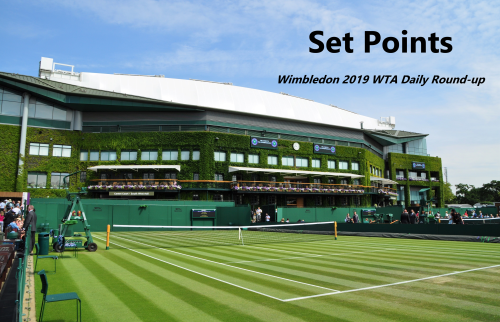 The most memorable moment of the day came out on No.1 Court as the 15-year-old, Cori Gauff served out her first ever main draw Slam win against the 39-year-old, Venus Williams. Wow this was amazing!

I was so impressed with Gauff’s movement, anticipation and composure. The way she handled herself on a big court against one of her idols was remarkable. Gauff served superbly, winning 78% of points behind her first serve. She really managed to jam up Williams on the return. I don’t think Williams had a good day at the office and she struggled to put Gauff away. Venus won only half of points played up at the net.

Gauff’s loopy forehands were quite something. I’m still trying to find a shot of the look that Venus gave one that she completely missed in the second set. They looked like they were going out from the TV shot (and presumably in the crowd from some of the crowd reactions) but kept landing in! An incredible moment that we’ll likely be talking about in years to come…

Made for the big stage ✨@CocoGauff becomes the youngest player since 1991 to win in the first round of the ladies' singles, beating Venus Williams 6-4, 6-4#Wimbledon pic.twitter.com/hfgcQGdZtq

It was a day of upsets with five seeds bowing out of the tournament including two top 10 players.

Prior to Wimbledon, Magdalena Rybarikova hadn’t beaten a top 50 player all year. Magda though is at her glorious best on the grass and she recorded her best win of the year with a straight sets victory over Aryna Sabalenka. Despite Rybarikova’s affinity with the grass, I’d still say it’s a bit of an upset because she hadn’t shown a great deal of form during the past three weeks of the grass court season and Sabalenka had looked a bit better in Eastbourne.

Sabalenka was error-strewn for the most part and hit eight double faults, many at crucial moments. Rybarikova showcased wonderful variety, particularly off the backhand wing, which seemed to throw Sabalenka off her rhythm, and was so secure on serve. A great match from Magda who is just delightful to watch on the grass 😍😍😍.

Yulia Putintseva produced a flawless display to beat a hit-or-miss, Naomi Osaka on Centre Court. Putintseva just beat Osaka in Birmingham but I did think Osaka would come out fired up for this match. The world number two looked really sharp early doors and was dominating up at the net. However, Putintseva gradually worked her way into the match and managed to cause havoc with her slice to the Osaka backhand.

Osaka battled valiantly to force a first set tiebreak but crumbled towards the end of it with three pretty hefty errors. Osaka became increasingly error-strewn in the second set, particularly off the backhand side, and had no retort for a rock steady, Putintseva. I thought Poots played a brilliant match. There were no real negative antics. She did try to gee up the crowd at one point after a magnificent return drop shot winner 😂.

Yulia Putintseva basks in the applause of the Wimbledon Center Court. The crowd was on their feet after her upset win over #2 Naomi Osaka. pic.twitter.com/OY7ugRK48B

Zhang Shuai d. (23) Caroline Garcia, 6-4 6-0 – Biggest casualty in my draw! A notable upset based on recent form but Zhang Shuai does have history as a giant-killer.

Elina Svitolina won her first match on grass in 2019, beating Daria Gavrilova in straight sets. Gavrilova started the match with a clear gameplan and there were some really bright sparks from her in the first set. However, her execution was generally a bit off and the serve let her down when she managed to level up at 5-5. A mostly passive but solid, Svitolina served out the second set at the second time of asking.

A big difference between the pair was the serve as Svitolina opened up in the second set and was able to rely on her first serve and use it to set up the points in her favour. Gavrilova’s game rather unraveled in the second set. A solid win for Svitolina and already an improvement on last year’s Wimbledon. I still think she’s vulnerable in this draw and Margarita Gasparyan, who defeated her in Birmingham, will be a very tough second round opponent.

Heading to the second round: @ElinaSvitolina

Dayana Yastremka knocked out one of last year’s Wimbledon quarter-finalists with a straight sets win. I thought Giorgi made a brighter start to the match and twice led with a break in the first set. The difference, in my opinion, was the serve as Yastremska landed more first serves in and generally was more secure in her service games. Yastremska gets Sofia Kenin in the second round which will be a super second rounder.

Dayana Yastremska says she was riddled with nerves in her MD debut vs. Giorgi but happy to get the win. Said nerves came b/c of recent dip in form.

“I got twice sick during the grass season. I got a virus in Nottingham and in Eastbourne again."

The Eastbourne champion survived a dicey second set to record a straight sets win over Zhu Lin. Pliskova saved three set points in the second set, two with huge forehand winners, to break Zhu who served for the second set. Pliskova looked rather out-of-sorts, making strange tactical decisions and not playing with the same controlled aggression she showed in Eastbourne. The Czech player stayed calm and held it together in the tiebreak. Pliskova talked in press via WTA Insider about the slower courts. I’m not sure how much to read into the performance. A win is a win…

Pliskova: "I think the grass, it's kind of quite high and long. The ball just stays, doesn't really go. It doesn't really slide. Even for the serve, I thought if I still hit good serve, you can still have a point. It was more rallies than I thought there was going to be."

Last year, Aliaksandra Sasnovich caused one of the upsets of the tournament on No.1 Court when she beat Petra Kvitova on the first day of the Championships. Today she was back on No.1 Court against a top ten player. This time round there was no upset as Simona Halep overcame an injury scare and saved a set point in the second set to advance in straight sets.

Halep slipped when moving out wide at the end of the first set and had the trainer on in between sets. She said in her post-match interview that she had pain behind her knee and in her foot so we’ll have to see how that develops. I thought Halep did well to get this done in straights but it has to be said that Sasnovich gave her a lot of gifts. I’ve felt that Sasnovich has generally struggled to find her range during this grass court season and I thought she produced a lot of unforced errors against Venus in Birmingham. She missed a sitter on break point against Halep in the first set and and completely fell away in a sea of errors at the end as Halep won the last 11 points of the match.

Halep shakes off a scare after slipping at the end of the first set and resumes playing with measured aggression. Simona wins the last 5 games, saving a set point to beat an error-prone Sasnovich, 64 75.

My favourite match-up of the day didn’t quite live up to expectation as Hsieh won in just 67 minutes as Ostapenko completely lost the plot at the end. There were moments where Ostapenko was bashing winners but these were far outweighed by the unforced errors. The Latvian player didn’t serve well with just 50% of first serves in and nine double faults.

Ostapenko argued line calls towards the end after she had ran out of challenges. She seemed to accuse the linesperson of making a call so as to speed up the conclusion of the match because Hsieh was leading 6-2 4-2. Absolutely ludicrous. Hsieh was very solid, hitting 15 winners to just 4 unforced errors. Her celebration was joyous as always!

Petra Martic came from a break down to beat Jennifer Brady, 3-6 6-3 6-4. I only saw snippets of the match but I thought it was a very impressive comeback from Martic who uses her slices so beautifully on this surface. I think Martic is one to watch at this tournament.

Lovely from Venus at the net. Also love Marija Cicak in this photo!

"I told her thank you for everything that you did. I wouldn’t be here without you. I always wanted to tell her that."

The Wimbledon YouTube page has tons of press conference footage up for your viewing pleasure. There’s already more content than the entire two weeks of the French Open 😂. Linked below is Osaka’s press conference who was really downbeat and asked to leave as she felt she was going to cry 😭.

Really enjoyed this piece in the Telegraph about Kiki Bertens which focused on her introverted nature. Makes me like Kiki even more!

'I'd rather only 10 people watched me play on Centre Court'

Kiki Bertens tells @CDEccleshare how she's learning to cope with playing on the big stage https://t.co/x3uoqY4Ho6

The No Challenges Remaining Podcast draw preview is always an enjoyable listen before a Slam.

Our #Wimbledon preview is here! We remembered to press 'record' the second time, thankfully. #NCR229 on the women's group of death, a Kyrgios-Nadal possibility, the seeding formula, and more. https://t.co/OkRpPXnwa6

My bro and I enjoyed the online line judge game on the Times website. You can unlock the the final two rounds by simply setting up an account with the Telegraph. I think I got 3 out of 5 on the hard level!

And finally, this online line judge game is good fun. Watch 15 close line calls and answer in or out within three seconds. You will do very well to get them all right… https://t.co/vol3yxP9cM

For UK viewers – the coverage on the BBC iPlayer is fantastic!

For UK viewers – all courts are available on the BBC iPlayer and clearly labelled. What a dream! 😍

My Brother and I always predict the OOP for each day and trying to do Tuesday’s was hysterical. So much good stuff if you’re on a ground pass! While it’s the loaded half, I wouldn’t say the match-ups are as enticing as on Monday. Match of the day for me is Donna Vekic vs. Alison Riske, last up on Court 15.

Readers of MTB went two for three on day 1 match polls with just 30% going for Putintseva to beat Osaka. Here’s my three selected polls for day 2 of Wimbledon.