Hello from Birmingham! Monday witnessed the conclusion of the final qualifying matches and the start of both the singles and doubles draws at the 2019 Nature Valley Classic. I’m excited to be in Birmingham for the first time since 2013 and will be here until Wednesday. It’s been a busy few months at work so i’m revelling in some time to chill out with live tennis! For more coverage from Birmingham, check out the MTB Twitter and Facebook pages. Read on for the highlights from Monday’s action in Birmingham… and it’s live! 😀 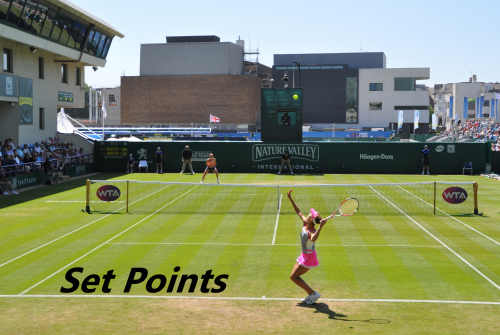 Hsieh-Sabalenka was my favourite match of the day on the OOP and it turned out to be the most enjoyable that I watched on Monday. A beaming Hsieh came from a break down in the decider to inflict a third straight defeat on a struggling, Sabalenka.

After an error-strewn opener, Sabalenka relied on her serve and much more accurate hitting to level up at one set all. Sabalenka was very gritty at the start of the decider as she saved a break point on her serve at 2-2. The Belarusian covered plenty of ground and was handling Hsieh’s game pretty well. There were a few contentious moments on Hsieh’s side as she received a time violation and then lost a point which she stopped, even though Sabalenka had put her hand up to imply Hsieh’s serve was long. Hsieh argued this with the umpire, Marija Cicak before ending her argument with “I don’t understand, whatever”. A total sass moment that drew laughter from the crowd 😂.

The stars seemed to be aligning for Sabalenka but she threw in a shocker of a service game at *4-3 which was bookended with double faults. While she only hit six doubles for the match, they all seemed to come at crucial times. Sabalenka held her serve twice with scoreboard pressure to get into the tiebreak but the errors returned as Hsieh showed some beautiful touch around the net and ultimately cruised through it.

Sabalenka chucked her racquet at the end and was clearly very frustrated. I could feel the tension from her, even in the second set that she won, and she never looked convincing up at the net. Hsieh played a good, solid match and she’s one to watch on the grass. She was absolutely delightful at the end with her celebration and post-match interview. I think Hsieh won a few new fans in Birmingham today!

I’m on a mission these next few weeks to watch players that I haven’t yet watched live (see later in the post). Therefore, I started my day on Court 1 to watch the final qualifying round match between Iga Swiatek and Bernarda Pera. I was really taken by Swiatek’s showings in Paris where she reached the last 16. Once again showing impressive composure, Swiatek saved three match points in the second set tiebreak and then held her nerve to serve out the match in the third set.

Swiatek struggled to find any rhythm on return in the first set and generally committed a lot of unforced errors as Pera’s backhand shone in the opener. What really impresses me about Swiatek is her mentality. While she had moments where she lost her cool, most notably when the umpire called her up on a double bounce which she strongly refuted, she didn’t let it define her and was able to move on quickly.

Pera had three match points in the second set tiebreak at 6-3 – Swiatek saved the first two by being aggressive and coming forward to the net, and then landed crucial first serves with Pera unable to put the return back into the court. Swiatek was hitting much more freely in the decider. Despite losing her early break when she lost a bit of rhythm on serve, she remained in control and consolidated her break to serve out a superb win.

Swiatek has come from a set down to win her last two qualifying matches and now gets a shot at Jelena Ostapenko in the first round of the main draw. This is the lone match on Court 1’s Tuesday schedule that i’ve got my eye on! 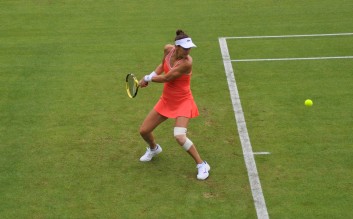 Johanna Konta got off to a fine start in Birmingham with a straight sets win over Anett Kontaveit. There wasn’t much between the pair in the opener with this match defined about who could get the first strike in. Ultimately, Konta landed more first serves in and hit with great depth on the return. The Brit became increasingly secure in the second set and even threw in some drop shots which seemed to flummox Kontaveit.

Konta went down *15-30 when serving out the match with one double fault, likely caused by a delay between first and second serves when a spectator in the crowd threw an errant ball back onto the court. However, the Brit steadied the ship and served out the match on her first match point. A no-nonsense performance from Konta as she simply outplayed Kontaveit. A very promising start to her 2019 grass court campaign.

Missed this one while watching Swiatek-Pera but the first match of the day on Centre Court saw an upset as Margarita Gasparyan defeated the number four seed, Elina Svitolina, 6-3 3-6 6-4.

The highest seed in action on Tuesday, Karolina Pliskova, eased to a first round win over last year’s semi-finalist, Mihaela Buzarnescu, 6-3 6-4. The story of the match was that Pliskova landed 77% of first serves in and won 86% of points behind it! Not many players are going to get close to Pliskova with those serving stats. 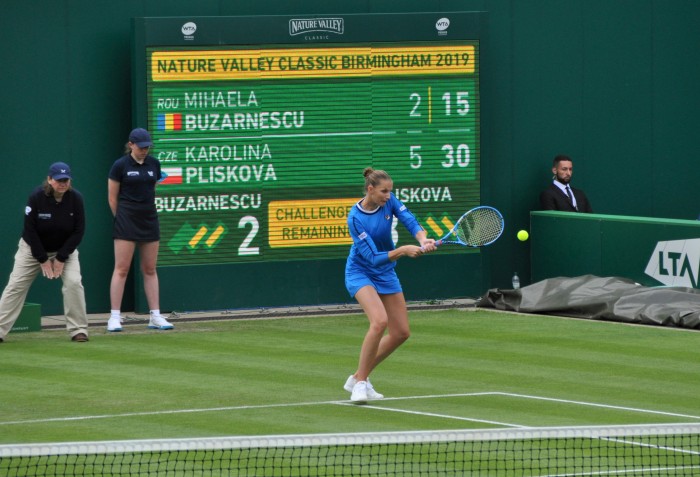 Although it ended on an error, the point linked below in Hsieh-Sabalenka was a memorable one!

Hsieh Su-Wei is an absolute delight. I loved her infectious joy at the end of the match as she hit balls into the crowd.

For fans of Daria Gavrilova, she was on the practice courts this morning with Iga Swiatek. Interestingly, she’s not in the singles or doubles draw in Birmingham. Later on, I stood and watched Maria Sakkari practising with her coach, Tom Hill. I really enjoyed watching them as they practised slices and drop shots with Hill reiterating that the punch slice can be a really effective shot on this surface. Maria was berating herself at times but seemed in good spirits. She’s such a nice person and seems to have a very strong bond with Hill.

Favourite comment around the grounds on Monday – the guy behind me said about Sabalenka, “you wouldn’t want to meet her on a dark night” 😂. 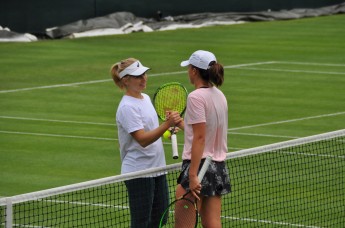 There are so many new players that have emerged on the scene since I last watched live tennis. My aim for the next few weeks is to try and watch as many new players as possible. I’ve got a list of ten players from the top 100 that i’m eager to tick off my list. One ticked off on day 1!

The Centre Court schedule for Tuesday is a stunner! I think i’ll spend most of my day there with perhaps a brief interlude to see Ostapenko-Swiatek if the time is right. Polls below for my two favourite matches on the schedule with French Open champ, Ash Barty, taking on the Nottingham finalist, Donna Vekic (fourth up on CC), and Julia Goerges playing the dangerous, Dayana Yastremska (first up on CC).