After a Wednesday wash-out, the quarter-finals from the bottom half of the draw were played early on Thursday. The results have produced an eclectic final four and the guarantee of a new Slam champ! The semi-finals are set for Friday and while I understand the scheduling, i’m still very disappointed that the women’s semi-finals will be played on Suzanne Lenglen and Simonne Mathieu, the second and third show courts. Hopefully this won’t ever happen again in the future with Chatrier getting a roof next year. Read on for the highlights from Thursday’s matches. 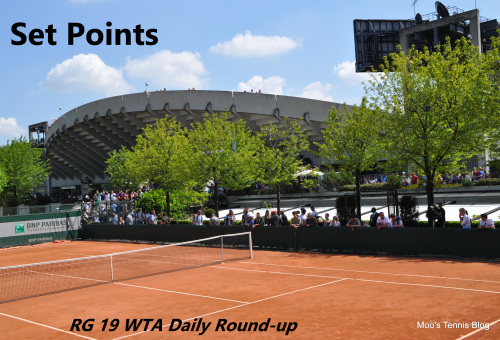 Ash Barty is into her first Slam semi-final, serving out a straight sets win over Madison Keys at the second time of asking. It didn’t feel like there was much between the pair in the first set. Barty got a slight opening at 4-3 30-30 and took it – Keys hit an impatient error and then hit a backhand straight to Barty who passed for the winner.

A few loose errors from Keys helped Barty pick up the first break in the second set. The Aussie player was unable to serve out the match but stayed in contention and forced another break. This time, a super-serving Barty closed it out with a love game. It was a very steady display from Barty. Nothing flashy, just solid all the way. The serve was excellent and she constructed points well, as always, with the backhand slice.

Never did I think we’d get to this stage and Ash Barty would be the favourite to win the French Open. Barty is my lone correct semi-final prediction from my Draw Challenge and I was thinking it was the least likely to come true pre-tournament!

Amanda Anisimova scored the biggest win of her career so far, stunning the defending champion, Simona Halep, with a superb display, 6-2 6-4. Regular readers of the blog will know i’ve been barking on about Anisimova for a while, but I can’t say I saw this run at Roland Garros coming!

From 2-2 in the first set, Anisimova won seven straight games. The 17-year-old American was peaking at the beginning of the second set. I thought Halep hit too many balls to the Anisimova backhand. That shot is just an absolute delight as Anisimova used her backhand to open up the court. On a few occasions she went back behind Halep which was a nice move, and she also used the drop shot effectively.

Halep became more aggressive on return to get back to 4-4 in the second set. However, one of the storylines for Halep in this match was missed opportunities. Halep went one out of seven break points. The defending champ missed a break point at 4-4 in the second set – admittedly this particular point was a clutch save from Anisimova who produced a gutsy second serve out of nowhere. Anisimova regained control of the match and broke for the win.

A very credible title defence from Halep. It just wasn’t her day, starting a little flat and then not doing enough to disrupt Anisimova’s rhythm. Anisimova played a great match and demonstrated her mental agility and poise in what was the biggest match of her career so far. An incredible talent.

After Halep’s departure, we are guaranteed a new Slam champ. Of the four players left, only Johanna Konta has reached a Slam semi-final before and none of them have ever made a Slam final. Exciting times!

11am Lenglen: Barty vs. Anisimova

Amanda Anisimova and Ash Barty’s press conferences are linked below. Interesting that Anisimova said that she was happy to play again on Friday, while Barty thought the quarter-final win over Keys was one of her best matches on clay over the past month.

Variety is no longer a peripheral part of women's tennis.

It is a much more regular part of an everyday experience of the women's game.

Marketa Vondrousova is an emblem of that development.

The second half of the latest Tennis with an Accent podcast previewed the WTA quarter-finals and end of the tournament.

In part 2 of the new @accent_tennis podcast, @saqiba and I discuss the WTA.

Obviously, we don't have the semifinalists yet, so Saqib and I explored what it would mean for Halep, Barty, Keys, Anisimova, Konta, & Vondrousova to either win or make the finalhttps://t.co/4IhybI6B9E

The women’s semi-finals will be played on Friday. Who you got for the final?!?!