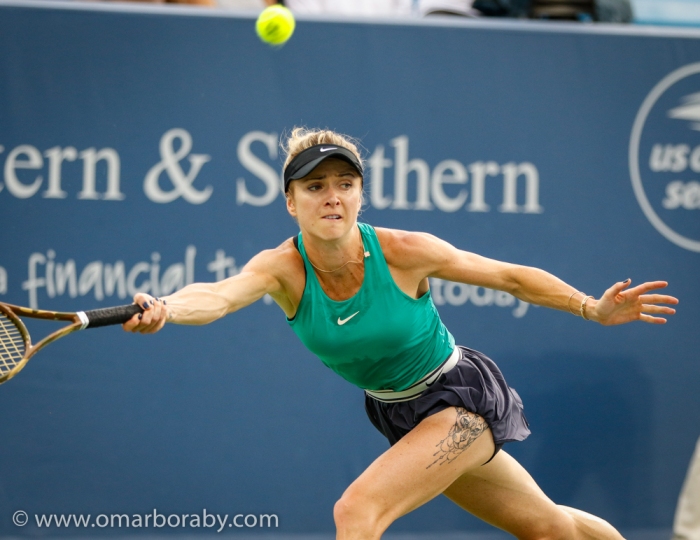 The 2018 WTA Finals final is all set after another pair of three setters on semi-final Saturday! Sloane Stephens and Elina Svitolina will contest Sunday’s final after the eight and ninth three set matches of the week. I can’t remember a WTA Finals that has produced so many close matches. It’s a testament to the state of tour right now with not much to separate the top ten right now. Read on for reviews of Saturday’s matches, as well as a snappy preview of Sunday’s singles final which will be played at not before 7:30pm local time in Singapore.

In yet another bruising encounter at this year’s WTA Finals, Elina Svitolina outlasted Kiki Bertens in the longest match of the week so far, prevailing 7-5 6-7(5) 6-4 in two hours and 38 minutes. Svitolina is into the biggest final of her career so far.

It was another rollercoaster match of twists and turns, and fluctuating form from both players. Svitolina and Bertens both displayed great form in the first set. Svitolina was stepping in on any short balls with the forehand, while Bertens’s serve was holding up in the key moments. From 5-5 in the first set, the tension really ramped up. Bertens tightened up serving to stay in the set at *5-6 and hit a double fault down set point.

Bertens sealed an early break in the second set and defended it all the way to *5-4. The Dutch player was unable to convert a total of four set points including a *5-4 *40-0 lead. While Svitolina landed some decent returns in play, it was a mental collapse from Bertens who committed an avalanche of unforced errors with. Bertens’s resilience has been one of the key trends this year and she did remarkably well to reset and level up at six games all. A dramatic tiebreak ensued, just the second the tournament so far. Svitolina was two points from the straight sets win but lacked decisiveness in the key moment. Svitolina’s puff ball second serve down set point at *5-6 in the tiebreak got the treatment it deserved as Bertens, the more willing to be aggressive in the key moments, won the second set.

The third set was another tortuous affair with Svitolina unable to consolidate an early break on a lengthy service game. Svitolina’s serve continued to be highly attackable. After a pep talk with coach, Andrew Bettles, Svitolina managed to find her rhythm again on serve and land a much higher percentage of first serves in. A hit-or-miss, Bertens struggled to make inroads on the return and became increasingly frustrated. Svitolina served for the match and yet again, understandably, showed some her nerves. Svitolina seemed unsure of her tactics as she was first passive and then showed some impatience. Svitolina saved two break points, chasing down everything with brilliant defence. Svitolina earnt a match point and took it in style. Strong first serve in, decent groundstrokes and then taking the risk by going down-the-line.

It was a tense match for the most part but highly enthralling at the ends of the final two sets with so much on the line for both players. Bertens constructed some beautiful points but was largely erratic. To her credit, she kept fighting and made Svitolina work extremely hard for the win. Ultimately, Svitolina was the more consistent player and managed to score a high percentage of first serves in during the third set. There were signs of the nerves that have affected Svitolina at the Slams but she managed to get across the finish line! I thought Svitolina played a brave match point. A huge win for Svitolina.

Sloane Stephens produced the most impressive comeback of the week, coming back from 0-6 *0-2 *15-40 down (!!!) to beat Karolina Pliskova, 0-6 6-4 6-1 in one hour and 55 minutes. Pliskova was superb for the first set and a half as she dictated the rallies and showed an encouraging desire to come forward. After three games, Stephens said to her coach she was feeling tight and things snowballed after then as Pliskova won the first eight games of the match.

Stephens worked hard to win her first game with a release of emotion after getting on the board. And after that, the games kept rolling as Stephens started to hit the ball with more conviction and get Pliskova on the move side-to-side. Pliskova’s first serve percentage dropped as Stephens would go onto win nine of the last 11 games of the match.

Staring down a heavy loss, there was no real sense of obvious panic from Stephens. I think one of the most impressive aspects of Stephens’s game this week has been her sense of calm and positivity on court. The American had very little to work with against an in-form Pliskova but competed superbly to turn the match around. Stephens was super sharp through the last set and a half and gave very little away as Pliskova became increasingly erratic with her ventures to the net not nearly as successful. Pliskova was bending over at the start of the decider and went away fast at the end, clearing showing some fatigue after an exhausting final month of the season.

From the semi-final line-up, this was the final I wanted to see. Stephens and Svitolina have won all four of their matches this week and will put their unbeaten records on the line for the WTA Finals championship match.

Stephens leads Svitolina, 2-1 in their head-to-head and won their most recent encounter in Montreal in straight sets, 6-3 6-3. I think Svitolina is generally playing at a higher level than during the summer and her win over Bertens was one of the biggest wins of her career. Stephens showed such impressive resolve to come back from the brink against Pliskova and I think that the way she turned the match around was huge confidence-wise. I feel like it might settle her been close to the exit. Both have defended superbly on this court this week but I feel Stephens’s movement and athleticism are superior.

I’m going for Stephens to win the whole caboodle.

One thought on “WTA Finals Singapore 2018, Day 7: Sloane Stephens vs. Elina Svitolina for the title”