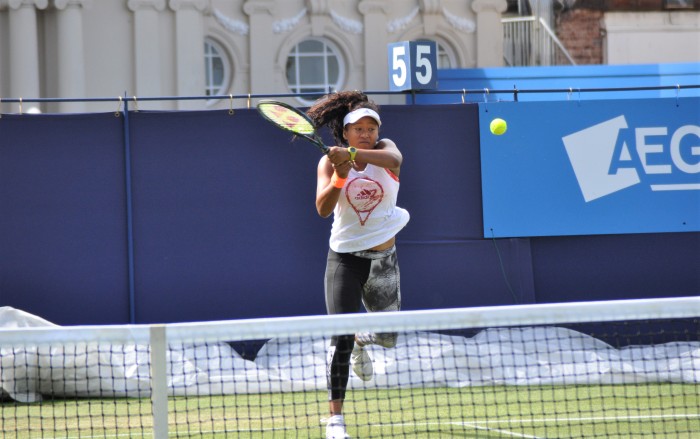 The dust has settled on Saturday’s US Open final but I am still in shock at what happened. Naomi Osaka beat Serena Williams, 6-2 6-4 to win the 2018 US Open, her first Slam title. This had to be one of the most dramatic matches i’ve ever watched. I’ll get to the drama later but the main emphasis must be on Osaka.

Playing her first Slam final and against her idol, I was blown away with Osaka’s performance as she further validated the notion that she is a big match player. Osaka again showed her patience and consistency in the rallies. I felt there was more intent on her shots than her match against Keys and she used angles beautifully to  expose Williams’s movement.

Osaka reacted to losing her serve by breaking straight back and with so much positive energy. That’s when the match rather descended into chaos. I thought Osaka maintained her composure magnificently and served out her first Slam with such poise. Take a bow, Naomi Osaka 👏.

Osaka going up to her box was a very special moment 😭.

For Williams, I thought she looked nervous coming out onto court but generally was sharper than in the Wimbledon final. Williams threw in some double faults which was rare to see but the serve had the pop on it that was missing in the Wimby final. Ultimately, she came up against an opponent who was better on the day.

So to all the drama. I don’t want to spend too much time dwelling on it all because this is Osaka’s moment. For anyone who didn’t get to watch though… Williams was given a code violation for coaching leading 1-0 15-40 in the second set. Williams was not happy about this and approached the umpire, Carlos Ramos, and told him “I don’t cheat to win, i’d rather lose”. The match continued and it did seem to fire up Williams who broke to lead 3-1. After failing to consolidate her break of serve, Williams smashed her racquet and received her second code violation resulting in a point penalty. Williams was absolutely furious and argued with the umpire for some time, demanding that he apologise. Williams called him a liar and a thief. Ramos then gave another code violation for verbal abuse which resulted in a game penalty. Williams had the referees for some time on but Ramos’s call stood.

Regarding the coaching, my overwhelming thought is that there is a lack of consistency in calling out coaching. There have been so many matches that i’ve watched this week where you can see obvious coaching happening (the latest example was Stephens in her QF vs. Sevastova) that was not picked up by the umpire. There’s not a consistent trend of enforcement by the umpires. The racquet smash was indefensible and deserved a code violation. I did tend to think that the game penalty was harsh. Williams did raise her voice and was very aggressive in her behaviour towards Ramos, but she didn’t use any bad language. It was sad to watch as Williams lost her composure on court.

I’m just really sad about what happened at the end. The first set and a half was actually a decent quality match and I was enjoying it. This should all be about Osaka and the sensational match that she played but her moment was overshadowed by all the drama. I was so excited about the trophy ceremony before the match. It transcended into one of the most awkward that i’ve ever watched as the crowd began booing and Osaka started to cry. The only person who could have stopped that was Williams and i’m so glad she took hold of the situation and got the crowd back on side to give Osaka the applause and adulation she deserved. This drama had nothing to do with Osaka. She won the match fair and square. This was her moment.

Heartbreaking scene as Naomi’s special moment was drowned in boos, Serena trying to cheer her up. pic.twitter.com/fme5e3j8g7

Osaka teared up in her press conference talking about why she apologised in her trophy ceremony.

"When I step on the court, I'm not a Serena fan – I'm just a tennis player playing another tennis player. But when I hugged her at the net, I felt like a little kid again."

Osaka also elaborated on her celebration plans which just made me smile. Osaka is such a down-to-earth character. She’s made such huge strides this year with her tennis, managing to harness the power. While this was one hell of a dramatic occasion, i’m so happy for her to have claimed the first of, in my opinion, multiple Slams. Never change, Naomi. You’re a star ⭐ .

Ah, to be young. #USOpen pic.twitter.com/ScEoWTHRhc