Manic Monday is arguably the most exciting day on the tennis calendar as all of the last 16 matches come together for a tennis bonanza. It’s equally a frustrating day as so many tantalising match-ups are pitted against each other at the same time. This preview post focuses on the four matches from the bottom half of the women’s draw where the likes of Serena Williams, Karolina Pliskova and Julia Goerges are all in action.

My favourite match-up from the bottom half is based purely on the fact that Julia Goerges and Donna Vekic will BOTH be playing for a first ever Slam quarter-final.

Goerges has now reached the fourth round of all four Slams after a superb 7-6(3) 3-6 10-8 victory over Barbora Strycova on Friday. Goerges picked herself up after twice failing to serve out the match. Ultimately, she was rewarded for her positivity against an increasingly passive, Strycova. Respect to both for a great match. Vekic is into the last 16 of a Slam for the first time in her career and it’s not a surprise to see it happen on the grass. After knocking out the number four seed, Sloane Stephens in the first round, Vekic has headed into her matches against Rebecca Peterson and Yanina Wickmayer as the favourite. She’s handled the occasion well and is yet to drop a set en route to the last 16.

Head-to-head: The pair have played just once before with Goerges beating Vekic in Budapest last year, 6-2 6-2 on indoor hard.

Thoughts: This is one of those match-ups that will likely come down to who handles the occasion and their nerves better. Goerges has more experience at this stage of a Slam BUT has five times failed to advance past the fourth round of a Slam. On only one of those five occasions did Goerges play a higher ranked player and that was last year at the US Open against the in-form and eventual champ, Sloane Stephens. This stat must surely must play on Goerges’s mind. Vekic is perhaps the fresher and playing with less pressure as the lower ranked player. I think it’s safe to say that Vekic is the more comfortable player on grass.

Goerges seems to have taken a more positive attitude to playing on grass this year. While this won’t be an easy match, i’m optimistic for Goerges that she’s in the right place mentally and that her consistent year of producing pretty solid results will count for something. Going for Goerges.

Both battling through tough third round matches, Karolina Pliskova and Kiki Bertens have advanced to the last 16 of Wimbledon for the first time in their careers.

Pliskova was on the brink against the impressive, Mihaela Buzarnescu, down 3-6 1-4, and later two points away from losing the match. Adjusting to the lefty serve and getting more returns and balls in play, Pliskova turned the match around to win, 3-6 7-6(3) 6-1. Bertens scored her best win on grass and her first ever win over a Williams sister. Regrouping after failing to serve out the match in the second set, Bertens was strong on serve and consistently aggressive in the third set as she defeated Venus Williams, 6-2 6-7(5) 8-6 in a truly fantastic third round clash.

Head-to-head: Pliskova leads Bertens, 2-1 in their H2H with the only really relevant match-up coming earlier this year in Stuttgart where Pliskova won convincingly, 6-2 6-2.

Thoughts: I’ve not been sold on Pliskova’s performances this week. Credit to Pliskova though for reaching the fourth round and breaking her previous record of the second round, which must give her a great deal of confidence. Bertens seems to be starting to believe that she can play well on grass and beating Venus was a huge win. I’ve underestimated Pliskova a number of times already this week and she’s so good at hanging in matches, particularly when her level is below-par. Ultimately, i’d favour Pliskova’s mental toughness and serve in this match-up.

This fourth round match-up is yet another example to not base all thoughts on pre-Slam form. Ekaterina Makarova and Camila Giorgi both came into Wimbledon with a negative record on grass this year. Makarova hadn’t won a match on grass, or even back-to-back singles matches in 2018. However, Makarova and Giorgi are well known for being dangerous opposition on the green stuff so in that sense, their runs through the draw shouldn’t be a huge surprise.

Makarova has produced stunning performances in the last two rounds, beating Caroline Wozniacki and Lucie Safarova in three sets. In both matches, there were pretty solid patches of peak Makarova. Giorgi’s run may not have been quite as flashy but she’s in good form and saved a match point to beat Katerina Siniakova in the third round.

Head-to-head: As alluded to above, the pair have never played each other on the tour.

Thoughts: I would guess Makarova is the favourite based mostly on experience as this is the 15th time (!) she has reached the last 16 of a Slam. Furthermore, she has been fantastic in the last two rounds. Giorgi though brings game on the grass. They’ve never played which makes it all the more fascinating. I think this could be more of a challenge for Makarova because Giorgi has quite a unique game in how early she takes the ball and giving so little away in her body language. Both are super aggressive players who will go after their shots. I think Giorgi is more willing to come forward to the net, which could be an interesting factor in this match.

Despite playing so, so well for two rounds, I do have my doubts whether Makarova can keep this level up. Most of this is based around whether she can stay calm because she tends to get extremely irate on court. We saw this against Wozniacki where she nearly let slip a 5-1 third set lead. I am on the fence with this one. I have decided to take a whirl and go for Giorgi… 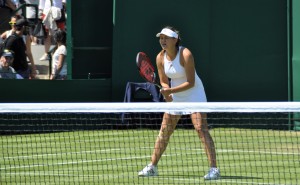 Serena Williams has yet to drop a set this week and is now the bookmaker’s favourite to win Wimbledon 2018. For a place in the quarter-finals, Williams will have to get past the world number 120 and fellow mother, Evgeniya Rodina.

Rodina is the only qualifier left in the draw and has won six matches to reach the last 16 of a Slam for the first time in her career. Rodina held her nerve to see off an erratic and inconsistent, Madison Keys in an absolute rollercoaster of a third rounder, 7-5 5-7 6-4. To add to the surprise factor of this run, Rodina hadn’t won a WTA main draw match in 2018 before Wimby!

S.Williams has steadily improved with each round and was made to work hard against Kristina Mladenovic on Friday, winning in two tight sets, 7-5 7-6(2). S.Williams has won less than half of the points behind her second serve. However, her first serve percentage has improved with each match and she has been successful behind it, winning 80% of first serve points through the first three rounds.

Head-to-head: The pair have never played each other before on the tour.

Thoughts: Not a great deal to say with this one. Rodina has had a great run but I don’t really fancy her chances in this match-up. The Russian player was struggling with an injury at the end of her third round win over Keys. The only way it could escalate is if Serena doesn’t get up for the match and underestimates her opponent. In my opinion, Serena for the win in straights.