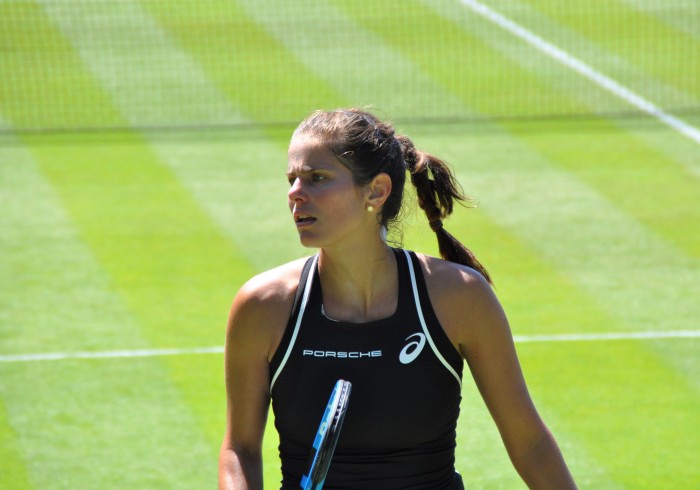 On a fabulously frenetic Friday, six of the eight WTA matches went three sets. I was double screening for much of the afternoon but managed to watch the entire match on No.2 Court between the number 13 and 23 seeds, Julia Goerges and Barbora Strycova. Read on for my review and analysis of what emerged into a dramatic third round match.

I’d circled the Goerges-Strycova match as one to watch on Friday and it definitely lived up to expectation. The pair went into this match tied at 5-5 in their head-to-head. While they clearly knew each other’s games very well, a point that Goerges reiterated in her press conference (see below) as the pair played doubles together at Wimbledon last year, there were a number of factors that made this match-up particularly intriguing. The pair had never played before at a Slam or on grass with all ten previous meetings taking place on clay or hard courts.

The match had a rather muted beginning with much of the crowd heading off after the men’s match, most likely for a break from the sun. The quality of the tennis was high and both players were dominant on serve in the first set. Strycova was tactically on point as she mixed in a number of serve and volleys which were mostly successful. The Czech player saved the lone break point of the set at 2-2. Strycova carved out a couple of 30-30 openings on Goerges’s serve that she could not build on as the set meandered to the tiebreak.

It was Goerges who raised her level in the first set tiebreak, finishing with three straight winners to take it, 7-6(3). Strycova made two glaring tactical errors, opposing how she had tackled the first 12 games with a sense of calm and control in her game. Twice she rushed to the net when in hindsight, it was not the right play and ultimately cost her the set.

Strycova is well known for losing the plot on court. There were no signs of this at all as she got straight back down to work and secured the first break of the match with a beautiful dipping shot that forced Goerges to hit a low volley that didn’t make it over the net. Strycova consolidated the break to lead 2-0 in the second set. Goerges was positive in her body language and that showed she hadn’t given up the fight in the second set. Strycova’s serve though was surprisingly stable as she won 100% of first serve points in the second set! Goerges’s error count began to ramp up as Strycova confidently levelled up the match at one set all, 6-3.

Half of their matches had gone the distance and based on their form heading into this tournament, it was not a surprise at all to see this one follow suit. I was delighted because I wanted to see more tennis between these two! Both players held serve with ease up to 4-4. As the finish line came into sight, Strycova was the first player to show signs of feeling it as she double faulted to gift Goerges two break points. While her serve let her down for that brief moment, it came to the rescue to get her out of trouble with an ace and an effective serve and volley. Danger averted, at least for now.

Up to 6-6 in the third set, this is probably the best i’ve ever seen Strycova serve as she hit three aces to hold to 6-5! Goerges twice served to stay in the Championships. Goerges twice convincingly put the pressure back on Strycova. The German player looked really solid overhead and crushed winners off both wings.

After 32 service holds in 33 games, the match rapidly swung in the opposite direction as breaks of serve dominated. Goerges finally earnt her first break on the Strycova serve at 6-6 as the Czech player left a ball from Goerges on a serve and volley attempt which landed in. Then she had several aborted ball tosses on a second serve at break point. Unsurprisingly, Goerges was able to take control of the next point and bring up an opportunity to serve for the match.

Goerges looked reasonably calm stepping up to serve for it at *7-6. However, it was clear from a double fault on the first point that she was not with calm! The German player promptly dropped her serve with another double fault, way longgg, to bookend the game. It was nervy, dramatic and gripping tennis. These two breaks were followed by three more as Goerges served for the match again at *8-7 and *9-8. From *9-8 *0-30 down, it was a case of third time lucky for Goerges as she closed out the match, 7-6(3) 3-6 10-8 in two hours and 56 minutes

.@juliagoerges fights her way into the second week at Wimbledon! pic.twitter.com/AFSYeSxswy

A first for Goerges…@juliagoerges is into the fourth round at #Wimbledon for the very first time after beating Barbora Strycova 7-6(3), 3-6 10-8 pic.twitter.com/UdT9j1eBS4

Julia’s press conference after her third round win is up on the Wimbledon website and can be found HERE. She talked about wanting it so much at the end and being very happy at the result and now getting two days off!

Goerges headed into this year’s Wimbledon on a six match losing streak at SW19 and hadn’t won a singles match here since 2012! The German player has broken new ground by reaching the last 16 of Wimbledon for the first time in her career. This may explain the nerves at the end.

Strycova played a pretty great match for the most part and mixed up the play nicely, coming forward as much as she could. Perhaps Goerges could have returned better, but Strycova really did serve well. I felt that Strycova became more passive and defensive from about 6-6 and wasn’t able to find as much variety as Goerges’s huge game, centered around that gorgeous forehand, increasingly took control of the rallies.

Goerges has never had a great record on grass which is puzzling in a sense. This is because she has some big weapons in the serve and the forehand, and grass generally favours the bold players, of which Goerges certainly is!

Goerges has simmered from her sensational end to 2017 and start to 2018 where she won Moscow, Zhuhai and Auckland. Still, it is noticeable that Goerges’s base level has definitely improved and she has been much more consistent on tour. This is demonstrated in her results through the year since the three titles in a row which include a semi-final in St. Petersburg (January/February), quarter-final in Doha (February), final in Charleston (April), quarter-final in Birmingham (June) and now this run at Wimbledon. Mentally, there’s no doubt she has come a long way in a year and the way she battled in the third set and overcame adversity was definitely noteworthy.

Goerges will play Donna Vekic for a place in the quarter-finals of Wimbledon on Manic Monday. This will be an absolutely fascinating match because both players will be trying to reach the last eight of a Slam for the first time in their career. With so much on the line, it’s a tough one to call…