Tuesday was another glorious sunny day in Eastbourne… what is this MADNESS? There were 14 second round matches and it was my favourite day of the trip so far as I tried to cover as many of the matches as possible. I’ll be heading home on Wednesday but hope to try and catch the first matches of the day. Read on for 10 stories in Tuesday’s live Set Points post from Eastbourne.

Just like Monday, there was plenty going on around the grounds on Tuesday morning as players practised before the first matches of the day. I saw Jelena Ostapenko, Donna Vekic, Carla Suárez Navarro, Julia Goerges, Magdalena Rybarikova, Kaia Kanepi, Hsieh Su-Wei, Elise Mertens, Aryna Sabalenka and Danielle Collins. The happiest of them all was a beaming, Sabalenka who was laughing with her team including Dmitry Tursunov.

I tried and failed to get onto Court 3 for Ostapenko-Kanepi so headed over to Court 4 for the second round match between grass court magicians, Magdalena Rybarikova and Hsieh Su-Wei. It wasn’t a great surprise to see Rybarikova retire after a set, 1-6, having reached the final of Birmingham last weekend.

Still, it was nice to get shots of Magda who is gorgeous to watch on a grass court. I thought Hsieh, who turned up five minutes late to the court, was really impressive. She handled Rybarikova’s slice and drop shots well (when they landed in) and was very secure, I don’t remember her making many mistakes at all.

Aryna Sabalenka scored her best career win on the WTA tour with a 1-6 6-4 6-4 victory over Julia Goerges. Fun fact – all four of Sabalenka’s wins on grass this year have come from a set down.

I stopped in during the second set from my favourite vantage point behind Court 1. Goerges’s forehand from this angle is an absolute delight to watch and she hit some superb forehand return winners. However, the return generally let her down with Sabalenka managing to find first serves when it counted. Sabalenka also focused on Goerges’s backhand side which did look vulnerable.

Goerges managed to do the splits during the second set and also argued with the umpire on one occasion about a line call she disagreed with. Two German speakers behind me understood what she had said – “that’s why she said it in German!”. 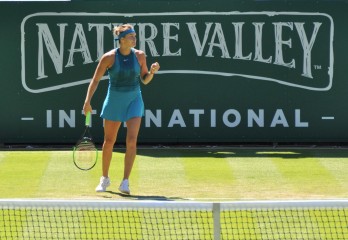 Barbora Strycova overcame a mini wobble in the second set to defeat Donna Vekic in straight sets, 6-1 6-4. Strycova was comfortable in the opener against an erratic and frustrated, Vekic. The Croatian player did put up some resistance to lead on serve midway through the second set. Strycova was starting to flip a little but reined it in nicely, playing an excellent service game at 3-4 and pumping herself up to break. The Czech player showed some nice touches of variety and kept Vekic on the move, as well as coming forward whenever she could.

I’m sad that I missed the absolute drama of this match! Buzarnescu recovered from a 3-6 2-5 (!) deficit to beat Kiki Bertens, 3-6 7-6(5) 6-3. I only watched the first five games where early doors, Buzarnescu just looked too good. The Romanian player had break points for a 4-1 first set lead. However, she missed them and then went onto lost five straight games and the first set. When I was watching Strycova-Vekic, I could hear Buzarnescu chattering away in the background 😂.

Jelena Ostapenko played her first match in nearly a month, beating Kaia Kanepi, 6-3 7-5. I sat in on her press conference where she talked about her nightmare French Open on the court, going out in the first round of all three events and “throwing up like 20 times” and getting sick before her mixed doubles. Ostapenko also confirmed her new coaching set-up…

Jelena Ostapenko says her split with David Taylor was amicable. “We worked for half a year together and it was good. He’s a great person.”

I’ve written a dedicated post for Daria Kasatkina’s second round win over Alison Van Uytvanck. This also includes highlights from her press conference where I got to ask Dasha a few questions.

First of two posts from Tuesday's action in Eastbourne…

Match review of Kasatkina vs. Van Uytvanck and highlights from Dasha's press conferencehttps://t.co/EydZvXQDjD

Improving as the match wore on, Ash Barty beat Kristina Mladenovic, 6-3 6-2 on a increasingly chilly Court 2. The first set was a bit of a mess from both players. Barty started better and was a touch more solid. Barty had a long chat with her coach at the end of first set. I’m guessing from what we saw that he told her to slice more! The slice is awesome. It’s a bit of a slow burner, but it increasingly caused Mladenovic issues.

Mladenovic held a long service game at 0-2. It didn’t deter Barty who reeled off the next three games. I remember the point that Barty won to go up 5-1. It was absolute perfection! She used the backhand slice with impeccable depth and stayed patient before launching a forehand winner. I just love Ash’s game on grass and I think she could do huge things at Wimby next week.

Barty picked off Mladenovic at the net almost every time up to 5-1 in the second set. The Aussie produced some excellent passing shot winners and lobs. Mladenovic played a peak game to hold her next service game and save three match points from *0-40. There was a slight sense of a sea change as Mladenovic came forward and actually started to win a few points at the net! Barty is so good though at keeping calm and restoring order as she served out the match from *15-30. I’m not really feeling Mladenovic’s game this year. Once again, her team were very vocal after practically every point she won. 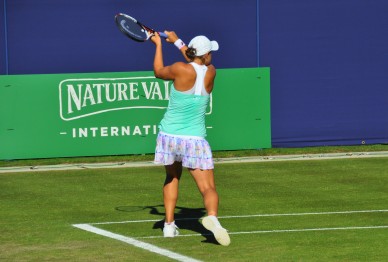 The third round will be played on Wednesday and it’s a cracker. Rightfully so, Kvitova vs. Radwanska and Wozniacki vs. Konta headline Centre Court. I’m hoping to start with Ostapenko-Buzarnescu on Court 1 as I think I may struggle to get on Court 3 for Kasatkina-Sevastova. I’ll then probably end my 2018 Eastbourne experience with Mertens-Sabalenka or Kvitova-Radwanska.